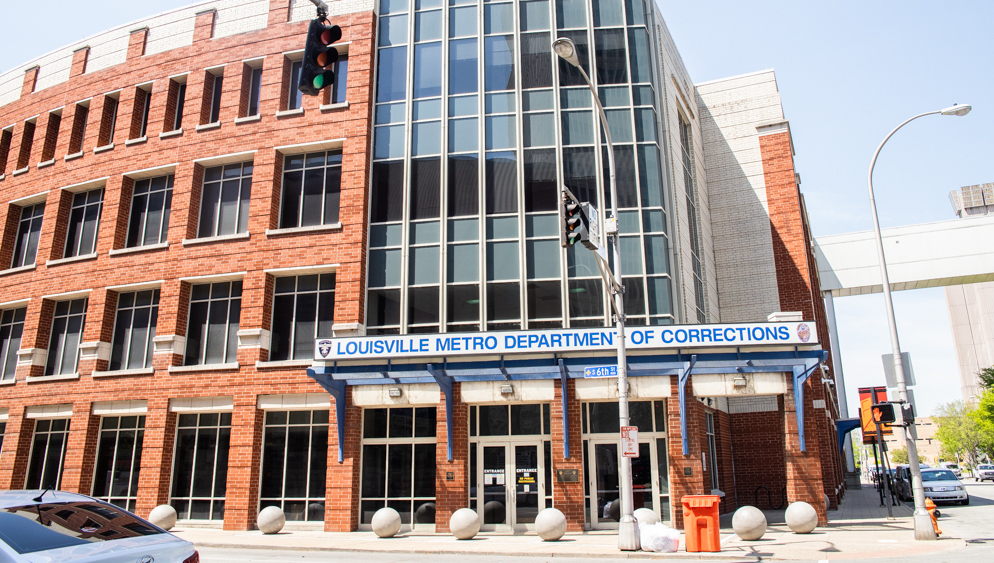 A 20-page report on Louisville’s jail written by an expert on in-custody deaths hired by the city earlier this year characterized the Louisville Metro Department of Corrections as an outdated, poorly designed facility where bad management, substandard practices and a “disturbing” tolerance of poor performance and misconduct by staff have created safety risks for the people incarcerated there.

“My perception is the current culture in the LMDC does not promote engagement and innovation as well as it should. Even more disturbing, there appears to be a tolerance for poor performance and misconduct, one of the most harmful behaviors that can exist,” wrote Gary Raney, a former sheriff of Boise, Idaho’s Ada County, who was hired as a consultant by the city in February to conduct a review of jail deaths. “If destructive behaviors are tolerated, the LMDC will never be the jail that you want it to be.”

The release of the report comes after 11 people incarcerated at LMDC died since Nov. 29, a sharp increase for a facility that city officials say averaged three in-custody deaths per year for the previous decade and a half. It also comes amid growing calls from LMDC Director Jerry Collins for a new jail to replace the aging, crowded downtown Louisville facility.

In the report, which was dated Aug. 12 and provided to LEO Weekly by the mayor’s office, Raney wrote that all the jail death investigations he reviewed were “insufficient” and failed to provide a broad look at “what went right and what went wrong.”

ACLU of Kentucky Policy Strategist Kungu Njuguna said the report underlined what he and others pushing for jail reform in Louisville have been hearing and saying about Metro Corrections.

“I think the report shows that LMDC is not equipped to care for a lot of its inmates,” he said. “Additionally, it shows that no matter if you build a building or not, culture matters and the people you hire matter.”

USES OF FORCE NOT TRACKED

Raney wrote that uses of force by officers were dangerous, untracked and represented a serious liability concern.

“Customs and practices regarding the use of force and restraints are dangerous and creating significant liability exposure,” he wrote. “Poor policy, training and supervision are the trifecta of failures and to one degree or another, all appear to be concerns in the LMDC.”

He added that in one of the jail deaths he reviewed, “There was a clear instance of unreasonable force that drew no attention from any ranking officers.”

The report did not identify which jail death Raney was referring to.

Additionally, Raney said Metro Corrections had no meaningful mechanisms in place to track the use of force or other critical incidents like suicide attempts and medical distress, despite years-old plans by the jail to follow data-driven policies.

He said that healthcare workers at the jail report “they are often not called to conduct medical assessments after uses of force.”

While recent focus in Louisville has been on deaths at the jail, “unnecessary and unreasonable force should also be of concern,” Raney wrote. “Every serious event should be seen as the opportunity to identify gaps and improve practices. There seems to be little, if any, recognition of this.”

MISCONDUCT THRIVES IN CULTURE OF APATHY

Improper use of force and other types of misconduct were encouraged by leadership that turned a blind eye to policy violations according to the report.

“Some supervisors have become apathetic about their obligation to uphold policy and create consistency among staff,” he wrote. “This inequity of supervision causes a fundamental deterioration of standards and creates safety and security risks.”

He added that LMDC sergeants and lieutenants “ignore, and may condone, misconduct like falsified logs, unreasonable uses of force, etc.”

As LEO Weekly previously reported following an internal investigation into the December suicide of Stephanie Dunbar, who was held for the last 18 hours of her life in a cramped “attorney booth” that lacked a toilet or bed, two LMDC officers were punished for fabricating observation sheets.

Raney concluded that kind of misconduct is not rare.

(LMDC has told LEO that the jail is hoping to install electronic radio-frequency identification (RFID) tags throughout the jail that guards will have to scan to complete checks, which officials say will ensure checks are being properly conducted.)

Raney wrote that it is a “common belief” that some of the drugs getting into LMDC enter the facility through staff. Per LMDC policy, according to Raney, staff are meant to only bring transparent bags into the facility, but that rule is “widely ignored.”

The jail also sees little interaction between officers and people incarcerated there, Raney wrote. That lack of interaction, he asserted, leaves LMDC staff blind to dangerous behaviors going on inside dorms.

“The inordinate number of fights between inmates is a strong indication that a few inmates in the cells are using violence and intimidation to gain control of the cell,” he wrote. “This allows them to establish themselves as the ‘tier boss,’ force payments of commissary and food and prostitute the weak inmates. There was little recognition by staff that this behavior may be occurring.”

Potentially contributing to apathy on the part of staff, the report noted, were feelings of being underpaid, overworked and short-staffed.

While immediate changes could improve safety at the jail — such as making more suicide-resistant cells and adding cameras to single-person cells — Raney wrote that changing LMDC’s culture was a bigger challenge that could take years.

In a number of areas, Louisville’s jail diverged from best practices, according to the report.

“Safety practices that are fundamental to a well-run jail are often absent in the LMDC, including quality observation checks, enforcing life/safety inmate rules and recognizing high-risk behaviors,” Raney wrote.

For instance, due to the lack of two or four-person cells, incarcerated people are either put in large dormitories or in isolation. Some people put in isolation would not do well in a large dormitory setting, which offers ample chances for conflict, especially with space in many LMDC dorms so scarce that people are forced to sleep on the floor. But single-person cells automatically increase the chances of suicide, a risk that can be lowered by having some detainees share two or four-person cells.

The report also criticized guards’ failure to remove blankets and other obstructions hung over beds and windows — sight blockages that can be used to shield suicide attempts, drug use and violence. During a tour of LMDC in July, LEO Weekly observed similar coverings of windows and beds.

A lack of supervision of work aides — prisoners who do jobs like cleaning, delivering food and laundry — creates opportunities to smuggle contraband, Raney wrote. “In well-run jails, staff always supervise the delivery of food, clothing, blankets, etc.,” he added.

Raney called LMDC “obsolete and poorly designed,” noting that it lacks the clear sight lines that are hallmarks of modern jails.

“The disjoined design of the LMDC inhibits the staff’s ability to casually see and hear inmate activity. This is inefficient but more importantly, the difficulties of the physical space have contributed to poor practices by staff,” he wrote.

Most of LMDC occupies what was once an office building. Instead of open areas ringed by cells, LMDC features large dormitories and single-cells branching off of maze-like hallways, making it hard for officers to observe prisoners.

Speaking to LEO after LMDC’s latest in-custody death on Sept. 22, Daniel Johnson, the head of the union that represents jail officers in Louisville, said the building layout combined with chronic understaffing created a dangerous situation.

“With our linear setup, no matter where you are standing on a floor or in a housing area there are blind spots and when you got o check those blind spots you are now leaving the area that you could supervise,” he said. “It is impossible to be everywhere at once, but the officers at Metro Corrections are doing their absolute best they can. They are pushing themselves beyond exhaustion with long work weeks and forced overtime.”

Collins, who took over as LMDC’s director in April, has said that the building’s layout presents challenges that are difficult to overcome and has called for a new jail to be built.

Some of the facility shortcomings Raney’s report mentioned — like cells with bars on the windows that make suicide attempts easy and the lack of locks on slots where food is delivered to dormitories — were already being addressed when LEO toured the jail in late July.

Since taking over as the director of the facility in April, Metro Corrections Director Collins has said the facility is making strides towards safety.

The jail is working on making cells more suicide resistant, planning on adding cameras to single-person cells and trying to expand specialized education and community programs that feature highly-structured schedules and dorms that are typically cleaner and less crowded.

There has also been a change in tone at the jail, with LMDC hiring a full-time psychologist who has publicly spoken about incarceration being an inherently harmful system and hosting an August symposium that featured a prison abolitionist as the keynote speaker.

Collins himself has said he wants to see systemic and dynamic change in the jail — as well as a “paradigm shift on officer and inmate wellness.”

But some pushing for jail reform, like Njuguna, the ACLU of Kentucky policy strategist, feel a much broader approach is needed to fix the problems at LMDC.

“To correct the problems going on in there takes a community response. We need everyone from LMPD to the judges to our whole community saying what’s going on in our jail is unacceptable and we want change,” he said. “True reform occurs outside of LMDC, not within it.”