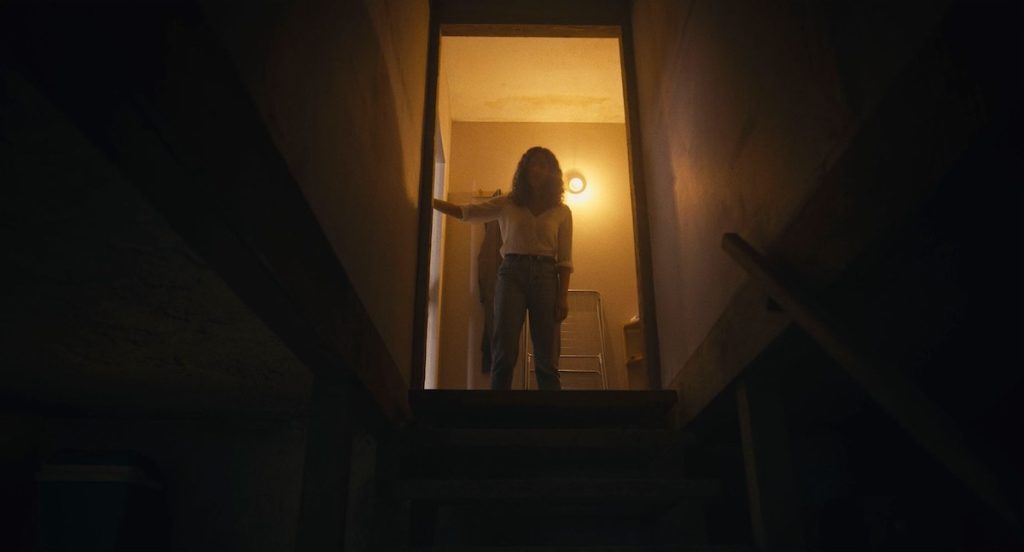 This is the moment early on in 'Barbarian' when Tess (Georgina Campbell) could have, should have run screaming from her Airbnb, but then the movie would only be 15 minutes long.

Like some bastard abomination that escaped from captivity, Zach Cregger’s first solo venture, “Barbarian,” is the craziest, goriest, most what-the-fuck-iest theatrical release thus far in 2022.

I still don’t know exactly what I watched, but I know that I would watch it again.

This is a movie that opens on Tess (Georgina Campbell) as she arrives at her Airbnb rental in a terrible neighborhood outside of Detroit, only to find it occupied by Keith (Bill Skarsgård). Keith acts so weird and awkward that you immediately think, “OK, this is going to be some kind of crazy timeshare slasher flick like Dave Franco’s not-scary-at-all ‘The Rental’ or Brandon Christensen’s considerably more unhinged ‘Superhost.’”

Content Warning: The next passage alludes to sexual assault.

But then “Barbarian” pivots unexpectedly from the ravaged residential ruins of Michigan to the sun-kissed beaches of California to suddenly focus on AJ (Justin Long), a schmuck-y TV director whose career gets #MeToo’d. You know you’re not supposed to feel bad for AJ because he says stupid things, like “it took some convincing,” when asked if his sexual tryst with the actress accusing him of rape was consensual.

Facing career suicide and financial ruin, AJ remembers that he owns property in Detroit, which makes you immediately think that this is going to become some horror movie about white male privilege and violent comeuppance when the prodigal asshole returns home.

If only “Barbarian” were that easy to describe or even define.

Eventually, Tess and AJ meet cute in the dank, subterranean maze that exists beneath the rental property that AJ owns, where 40 years before another man named Frank (Richard Brake) started collecting women to be his conjugal incubators…wait, hold on, that’s giving a little too much away.

Part of the joy of discovery in “Barbarian” is not having a clue about the plot of “Barbarian” prior to the movie starting.

And part of the reason that “Barbarian” proves so confounding is that even after watching it, you still don’t know a damn thing about the plot.

What I can tell you is that Cregger makes masterful use of light and darkness, and he deftly navigates some cramped confines to generate maximum unease. He writes with a propulsive flair that keeps his movie moving forward with purpose even as you struggle to acclimate to its slippery narrative slope.

Best of all, it’s not giving anything away to share that the deranged third act of “Barbarian” includes some of the most insane and stomach-churning practical effects work in recent memory, and for at least the diehard horror fans, that right there is enough.

For everyone else, you’re just going to have to trust me. “Barbarian” may not make a lick of sense, but it is brutal AF and entertaining as hell.

4 out of 5 stars
Now Playing