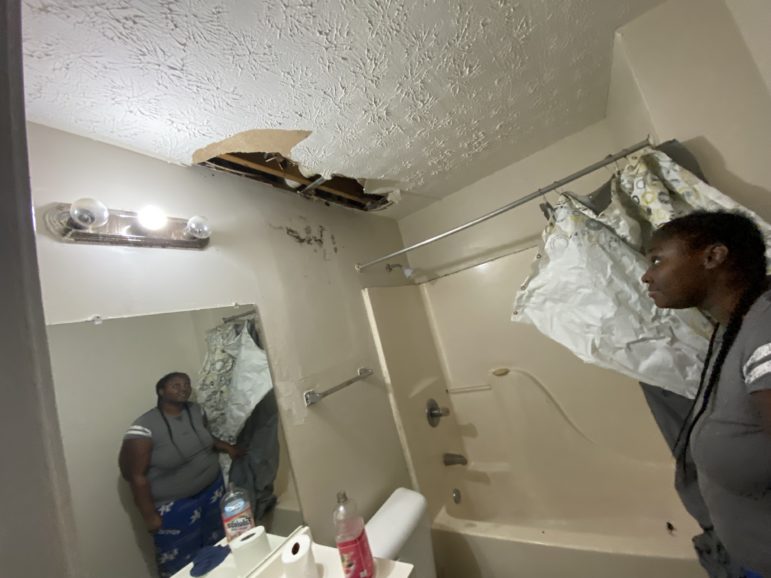 Shalonda Forney in her bathroom, looking at busted ceiling that dropped a mouse in her tub when it caved in.Photo by Jacob Ryan

This story is part of KyCIR’s Housing Project. Complete this survey to share tips, experiences and questions that can help shape our reporting.

Shalonda Forney got a new landlord earlier this year, but no one told her.

Forney, 29, lives with her four kids in a small ground-floor apartment in Park Duvalle. Since she moved in about four years ago, she’s known the landlord as Mirage Properties — a local company that until recently operated more than 700 rentals across western Louisville.

Mirage sold Forney’s place and over 300 other apartments last month to Benimax Investment Group, an Atlanta company backed by investors from across the globe, for more than $27 million. The apartments are mostly located in Louisville’s West End, which includes Park Duvalle and other predominantly Black neighborhoods, according to Jefferson County Property Valuation Administration records.

Today, Forney knows the company’s name — but not much else.

“We don’t even know who this company is,” she said. “They should have introduced themselves.”

Benimax is one of several private-equity firms buying hundreds of apartments and single-family homes across Louisville and building rental portfolios. This year, firms in Texas, Chicago, California and New York City have bought at least 880 properties across the city, according to an analysis of property records by The Kentucky Center for Investigative Reporting.

The trend mirrors the nationwide surge in big, corporate real estate investors getting into the rental market — the types of companies that worry housing experts, advocates, lawmakers and tenants.

“This is frightening,” said Tony Curtis, the executive director of the Metropolitan Housing Coalition, a local housing advocacy nonprofit.

Curtis worries that the companies are buying up rental stock at a time when Louisville needs it most. He said the city needs about 55,000 affordable housing units, and he fears the investor-backed companies will threaten the ability to preserve or develop more affordable units in the city.

For renters, the investor-backed landlord can be bad news, said Elora Lee Raymond, an assistant professor of city and regional planning at the Georgia Institute of Technology. She said big companies are known to increase rents, push tenants out, and spur displacement — particularly in communities of color like the West End.

Raymond didn’t know much about Benimax, specifically. But she said investor-backed landlords, generally, often are more mechanized compared to local landlords. When big companies move in, personal relationships can be replaced with an app or online portal; tenants who could often get away with paying a few days late might get hit with late fees, she said.

“All those things can change, particularly with landlords who are efficient with maximizing their rent,” she said.

Benimax officials did not respond to interview requests.

The company was founded in 2013 and has acquired more than 7,000 properties, mostly apartment complexes in Atlanta and Texas, according to its website. Benimax has a track record of turning profits out of properties. According to a listing of former properties on its website, the company has recorded investment returns between 20% and 175%.

Bill Menish, owner of SVN Menish Commercial Real Estate, helped broker the deal between Benimax and Mirage. He also helped Mirage sell more than 300 single-family homes to Amherst Residential, an investor-backed company from Austin, Texas, that owns more homes in Louisville than any other entity.

Mike Burkhead, who founded Mirage Properties in 2000, declined to comment for this story.

Menish said companies like Benimax are eager to buy, and property owners like Burkhead are looking to liquidate.

“Right now is a perfect storm,” he said. “We need more sellers because we have so many buyers.”

And most all buyers are out of state, he said.

This is not good news for Louisville Metro Council member Barbara Shanklin, a Democrat from District 2. She said out-of-state corporate landlords are a problem in her Newburg neighborhood — they don’t cut grass or keep up their properties and are nearly impossible to contact.

“It’s a headache to council people and the people who live here,” she said.

But there’s little local legislators can do to interfere with the private housing market, said Shanklin, who also chairs the council’s Community Affairs and Housing Committee.

She is hoping to bring some transparency to the system. Shanklin and five other council members proposed an ordinance currently held in a council committee that would require property owners to register rental properties with the city and include their identity — something the current rental registry ordinance doesn’t.

The ordinance would aim to make clear who owns a property, Shanklin said.

“That’s the only thing we can do,” she said.

And it’s the least that property owners can do for their renters, said Forney, the single-mother who lives in an apartment Benimax just purchased off Beech Street in Park Duvalle.

She didn’t learn about her new landlord until a few weeks after the sale when she got an email about renewing her lease. To her, it felt disrespectful.

She’s not working right now — it’s too difficult to manage schedules for three kids in school and her four-year-old who stays with her during the day. Forney, like nearly 90 other people that live in the apartments bought by the company, is on Section 8. But she said that shouldn’t erase her right to be treated fairly and respectfully.

Forney said Mirage neglected maintenance issues and didn’t create a safe environment at the apartment complex, where one of her young sons is bullied and a neighbor has turned violent. She didn’t expect much from a different, bigger property manager.

This week, though, she hit a breaking point after her bathroom ceiling caved in, dropping a mouse into her bathtub. She’s asked Benimax’s property management company, Greenwood Star, to fix the ceiling and remove the mouse, but she said they’d been slow to respond. She said company employees tried to assure her the shower would be fine to use until a repair could be made. Greenwood officials did not respond to a request for comment.

Forney said she doesn’t want to sign another lease with the new landlord. She doesn’t want another year of feeling neglected by a company. Now, she wants to move.

“Anywhere but here,” she said.