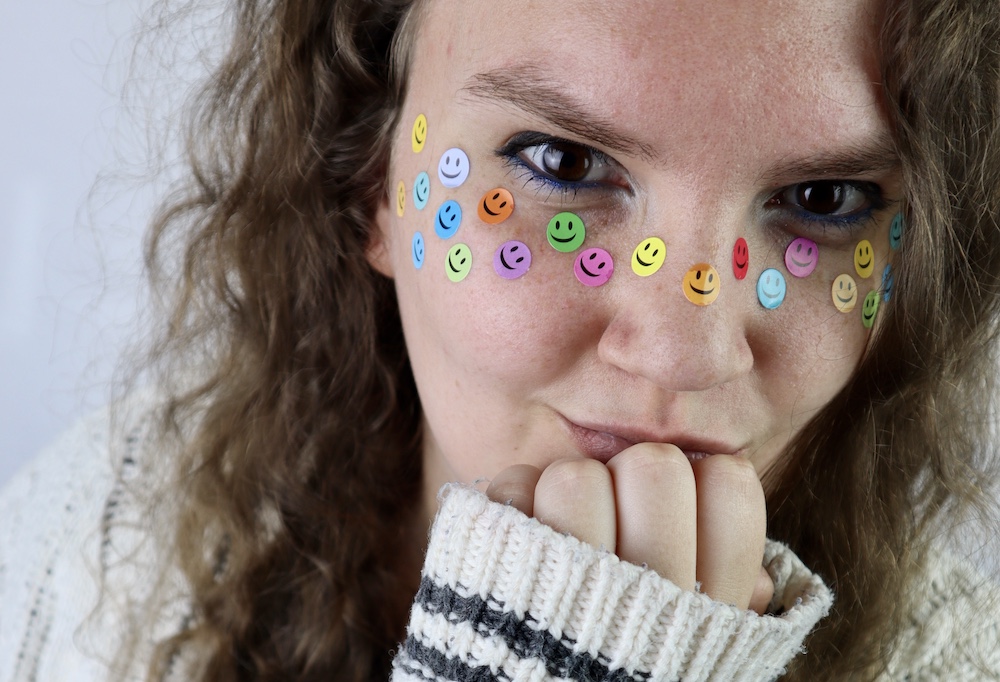 27-year old local artist Nikki Douglas creates pieces in an eye-candy style she calls “lyric art,” a type of collage that combines images with song lyrics, especially those from popular artists like Taylor Swift, Mayday Parade and Blink-182. She’s racked up a healthy social media following from it; some of the artists whose songs have inspired her have reciprocated the appreciation and shared her work to their fanbase.

Douglas spoke with LEO about her work, the importance of Taylor Swift, and how music can help people heal.

* This interview has been edited for length and clarity.

LEO: Tell me about your work and what motivates you.

Nikki Douglas: My thesis is about how music is universal, but that interpretation is not always as universal. What I may interpret a lyric to mean could be completely different to how you interpret it, and what the artist meant when they wrote it could be entirely different to what we both interpreted. What is universal to it is that it makes all of us feel an emotion, and in my art, I’m trying to capture that emotion.

I started doing [this style of art] in high school a little over 10 years ago, out of a need to express my emotions in what I would call my art journals. They were basically mixed media journals where I would express what I was feeling that day. If, that day, I was really struggling with my body image, I did a piece about my body image; if it was a rough day and I was really feeling down on the world, I’d do a piece about that. Or if it was a really great day, I would do a piece about how great I was feeling that day. And so those journals really cataloged my emotional journey throughout high school, and that’s what sent me on my way into this style of art, of collage and mixed media.

Your Instagram bio lists you as a Swiftie, and, obviously, bandom is a big theme in your work in general. What is it about Taylor’s music specifically that inspires you?

She truly has a lyric for practically anything you’re going through at any moment in time. Whether it be the line in ‘The Man,’ ‘If everyone believes you, what’s that like?’ With everything going on with Roe v. Wade, I had to share that piece about that. Because as a woman who has struggled myself with that, not being believed by men, when I was going through a brutal time in my life, ‘When everyone believes you, what’s that like?’ [Or] even just heartbreak lyrics. I truly believe her lines are so easy and accessible.

She’s been to Louisville three times, actually. She came for Speak Now, Red, and Reputation, and I’ve never seen her at any of them, because — you’re gonna find this so funny — I was the girl who was too cool for Taylor Swift. ‘Ew, who’s Taylor Swift?’ That was literally me; I mocked her for years.

Actually, when Reputation came out, I had a man who was trying to destroy my professional career. When I heard Reputation, I was like, and this is literally what I thought, ‘Shit, this bitch gets it.’

That’s why that album means so much to me. In the same vein of her, in the darkest time of my life, I found the most beautiful thing in the world, which was [my fiancé] Alex [Shaw.] When I thought the world was gonna end and I would never get past it and things would never be okay again, they’re more than okay. They’re wonderful. They’re fantastic. And I’m doing better than I ever was, as she would say. One of her quotes is ‘I’ve stopped listening to what people say what I can’t do and doing whatever the hell I want to do.’

You have had a number of artists like and share your work online. Which one of those was the most exciting or meaningful to you, and why?

Mayday Parade, because they actually recognized me and realized who I was when I saw them in concert. I told them I would be front row at their concert, and they said that they would look for me. I had a sign that said, ‘Thank you for sharing my art.’ And Derek [Sanders], the lead singer, was singing, and he looked at me like, ‘You look familiar.’ And then he nodded his head like, ‘Yes, you’re that girl that always shares the art.’ And I was losing my mind. I’m like, ‘Yes, yes, that’s me!’ Them realizing that I am that person was just the highlight of my career for me at this moment because I’ve been such a big fan for them. ‘Oh Well, Oh Well’ really helped me through a really dark time in my life, as most lyrics have.

Shallow Pools, they’re a smaller band — what was funny about them is, I think they shared [my piece] in a group chat, because slowly each member of the band commented on my piece one by one. That was really exciting to see that they’re all noticing and recognizing my work and talking to each other about it. It means a lot to me that they inspired me and I’m inspiring them back.

One week, one month and one year from now, what do you hope people take away from your work?

One week from now, I hope people take away — always, I hope that people take away — that they’re not alone, because I feel like the world is such an isolating place, especially when it comes to emotions. People can feel so alone when they get bottled up in their emotions — especially now, people feel so cut off from the world. That’s why I try so hard to share my story, my life. I’m not afraid to talk about things that have happened to me because I think it’s important to share stories, because it makes people feel less alone.

A year from now, I would still love to be giving, doing artwork, getting more outreach to artists. I’d love to do more of local artists, like doing an album art. I’ve actually had a few musicians reach out to me about possibly doing lyric videos and doing it in my art style.

Some people want free art. A lot of people don’t want to pay for art, and I get that. I’m really trying really hard to make art accessible to everyone. That’s why every single one of my business cards is a unique piece of art, and no two are exactly alike. I tried to create the idea of art in your pocket, because I think it’s very important that art becomes more accessible to people, because people can feel like art is gatekept by the more wealthy. I think that we should try to make art as accessible as absolutely possible to people of all demographics because it’s so enriching to the soul.