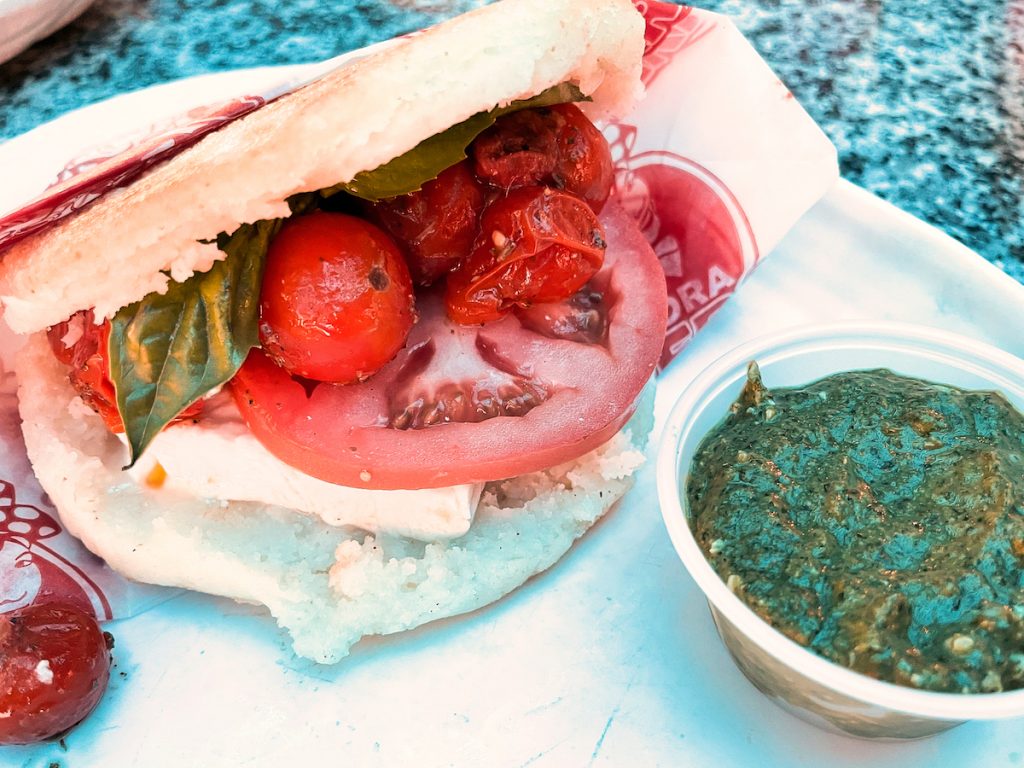 An arepa is a deliciously crunchy grilled corn cake that – especially in Venezuelan tradition – is stuffed with all manner of goodies. The Caprezolana arepa features a caprese salad!

COVID-19 has been rough for NuLu restaurants. The pandemic has taken at least partial blame for the loss of Harvest, Rye and most recently, Decca.

For the Martinez family’s Olé Restaurant Group, though, challenges create opportunities. They opened the Cuban restaurant La Bodeguita de Mima in July 2020, early in the pandemic, in the former headquarters of Creation Gardens at 725 E. Market St.

Señora Arepa came next, opening in the spring of 2021, serving Venezuelan street food in the smaller building behind Bodeguita at 721 E. Market St., once the home of Ghyslain on Market.

They made it a trifecta early this year, moving their popular Mexican eatery, Guaca Mole, from the eastern suburbs to the former home of Rye.

I’d like to try all three of these spots, and count on it, I’ll get there soon. For the fi rst look, though, they had me at “arepa.” I’ve loved this street-food delight since sampling them from Colombian street vendors along Roosevelt Avenue in New York City’s Queens borough.

So, what, you ask, is an arepa? It is a thick, crisp cornmeal cake that originated among indigenous tribes in the mountains of what now make up Venezuela, Colombia and Panama, long before Columbus and the colonizers came.

It’s still popular in those countries and beyond, but with a difference. In Colombia, they generally dress the corn cake with butter or cheese and call it a day. But Venezuela has made the arepa a culinary icon. They’ll slice into a steaming corn cake and stuff it with, well, just about anything: meats, cheese, avocado, salad, vegetables, even dessert!

Señora Arepa offers a taste of Venezuela in a menu that offers 16 different full-size arepas, along with smaller appetizer and dessert arepitas and other Venezuelan dishes too, with quick counter service in a pretty indoor-outdoor setting that gets you in a Venezuelan mood.

The patio feels cool even in mid-August, and on a bright summer day it was so, so blue. The light from the clear sky was blue, and even the gray granite tabletops were tinted light blue. It was like being under water, or on a Caribbean beach anyway. It also shifted my food photos toward a bluish hue, so apologies if the images with this article seem a little off. It’s not the food.

We started with an Amazónica salad ($10.99) and received a tropical mixture based on torn bits of fresh romaine plus cilantro, arugula and chives, tossed with shreds of carrot, beet, and red onion and corn. It was topped with lightly-roasted cherry tomatoes, several inch-thick rounds of hearts of palm. It was fi nished with a fresh, citrusy passionfruit vinaigrette that didn’t overwhelm but pulled the disparate fl avors together.

The arepas here are hefty, wrapped in paper to make them portable, but big enough to require two hands for eating. A single arepa could make a light meal, but we shared three.

I meant to order the caprezolana salad ($12.99) but got the less pricey caprezolana arepa ($9.99) instead. Fine by me! More arepa, less veggies. It’s a Venezuelan take on the classic Italian caprese salad, with the traditional tomatoes (a fresh slice and some roasted cherry tomatoes, too), cheese (creamy Venezuelan queso de mano), pesto in lieu of fresh basil, as well as romaine and arugula. All this stuffed into a crispy, subtly corn-fl avored arepa made it more than a mouthful.

The menu here is so cheese-heavy that I thought about nicknaming the place Chef Fernando’s House of Cheese. However, one option, the vegana arepa ($9.99), is free of either cheese or meat, as the name implies. More than just a salad in a corn cake, it was loaded with tender hearts of palm, crispfried plantains, black beans and avocado wedges, with a small tub of bright-green, garlicky chimichurri on the side.

Around the ring of the Caribbean, people do amazing things with pork, marinated in citrus and spice and long roasted until it’s falling apart. The pork used in arepa de pernil ($10.99) was amazing, butter-soft and succulent. Six big chunks were tucked into a single arepa, so many that some of it fell out on the plate. The edges were crisp, crunchy black and the meat fell apart at a touch. The cheese, queso Guayanes, resembled stretchy, fresh mozzarella, with a delicious fresh milk fl avor. The pork was dressed with avocado wedges and a thick round of tomato.