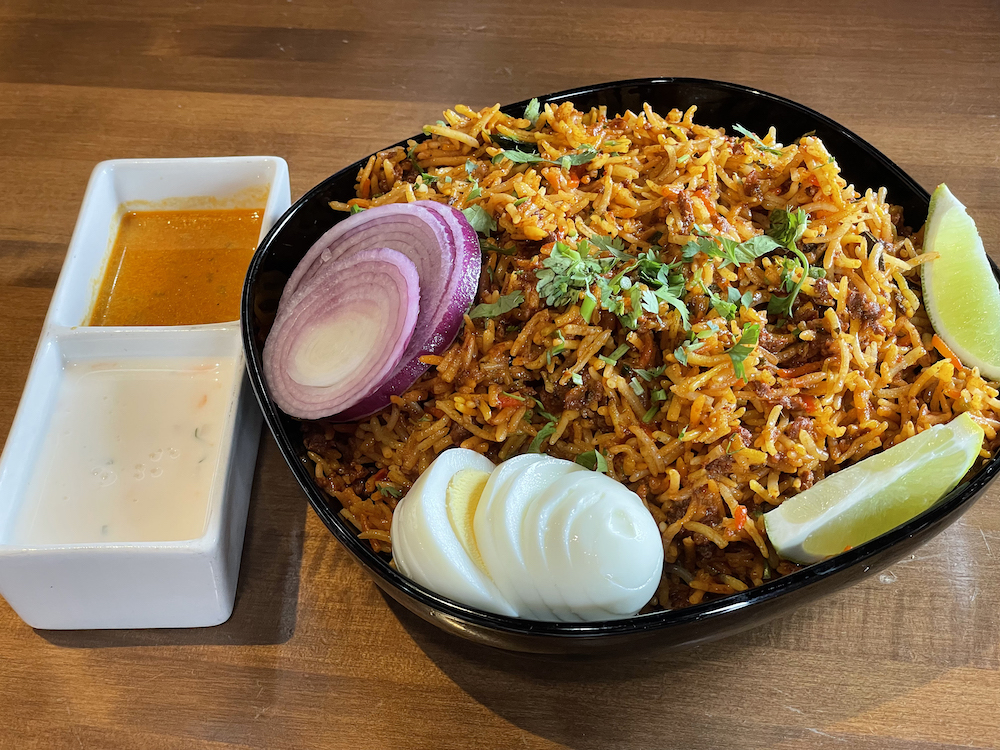 Goat biryani, a feature on the summer specials menu, offers a huge quantity of rice and minced goat meat so spicy that even heat level "1" sets your face on fire. In a good way.

Thoughts inspired by a recent meal at Louisville’s Tandoori Fusion restaurant: Fusion cuisine has been around for centuries, going back to Chinese restaurateurs coming up with chop suey to please Western consumers in 1850s California, and maybe even to Marco Polo and his noodles.

But the concept didn’t get a name until the 1980s, when chefs like Roy Yamaguchi and Wolfgang Puck began to intentionally combine flavors from different cultures. Before long, just about everyone was chowing down on Pacific Rim cuisine and Thai pizza, and calling it “fusion.”

The concept became hugely popular — I loved it, too — as it invited chef-driven creativity to come up with, well, “new original cuisines which could be called true artistic creations … artistic dishes never seen before.” Yeah, the original Japanese Iron Chef took fusion to a new level.

But a funny thing happened on the way to Hawaiian pizza: People started asking questions about cultural appropriation. “Many white cooks and chefs have been called into question after presenting audiences with dishes from which they have no culinary connection,” food-culture expert Sylvia Tomczak wrote in Canada’s RestoBiz magazine last April. “This is problematic as ethnic ingredients are rebranded to be trendy, cool, and relevant for Westerners while sometimes totally disregarding culinary histories.”

Uh-oh. Does this mean that we need to strip our pantries of international delights like Laoganma hot chile crisp, and even [gasp] pasta? Naaah. Even Ms. Tomczak eases up a bit at the end of her piece. “While it’s inevitable that our pantries will see more unique international goods going forward, we must be respectful of their origin and not claim to be anything other than inspired by another culture.”

So what about Tandoori Fusion? Well, for starters, it’s owned by folks of Indian origin who live in Kentucky now, so no one can question their cultural authority. What’s more, it musters an admirable farm-to-table approach. Many of its ingredients come from local farms, including the Veering Creek farm in Smithfield, Kentucky, founded by Tandoori Fusion’s owner Purna Veer.

Tandoori Fusion specializes in traditional South and North Indian cuisine, but it earns the fusion moniker with a selection of culturally hybrid dishes ranging from chicken tacos and dosadillas (yeah, quesadillas wrapped in South Indian dosa pancakes), and even pizzas with your choice of tikka, spinach palak or a traditional margherita. That’s fusion, all right. Just about everything on the 14-item fusion menu page is priced from $9.99 to $12.99.

The main menu’s two large pages are filled with about 130 Indian dishes (and a handful more fusion items mixed in). Just about all the entrees range in price from $11.99 to $15.99, with a few extra-large tandoori roasted dishes rising to $21.99. A dozen summer special appetizers and entrees are currently available, and a dozen lunch combination plates are priced from $9.99 to $14.99.

We paid homage to the fusion notion with the Japanese charms of blistered shishito peppers ($7.99 on the menu, but only $6.99 on our tab). Eight tasty, two-bite pale-green peppers were lined up on a heavy, rectangular white plate. Just gently piquant, they were dotted with a few black spots from a quick encounter with the grill, dusted with salt and a sprinkle of sesame seeds. A dish of soy sauce on the side made a pleasant flavor boost.

Back on the regular menu, I ordered a masala dosa ($11.99), but got the bad news that they were out of potatoes for the filling. Our server suggested an onion dosa instead, and it was all right. This South Indian speciality is based on a large, thin pancake made with rice and lentil flours, quickly griddled, rolled around a filling and served with a thick brown soup called sambar and spicy chutneys. It wasn’t bad, although the portion of finely diced, gently-sautéed red onions was a bit puny. The dosa itself isn’t spicy, but my requested spice level four (out of five) definitely lit up the sambar and what appeared to be horseradish and mustard chutneys.

Goat kheema biryani ($17.99) from the summer special menu was a huge portion, enough to provide leftovers for days. Served in a black bowl with yogurt raita and an orange chutney on the side, it was made with very long-grain basmati rice flavored with an aromatic mix of Indian spices and fat that unctuously coated every grain and each bit of crisply fried minced goat meat. We had requested low-heat spice level 1 for Mary’s sake, but the dish we got was incendiary… and delicious. It was topped with a sliced hard-boiled egg, a thick round of red onion, two lime wedges and chopped cilantro.