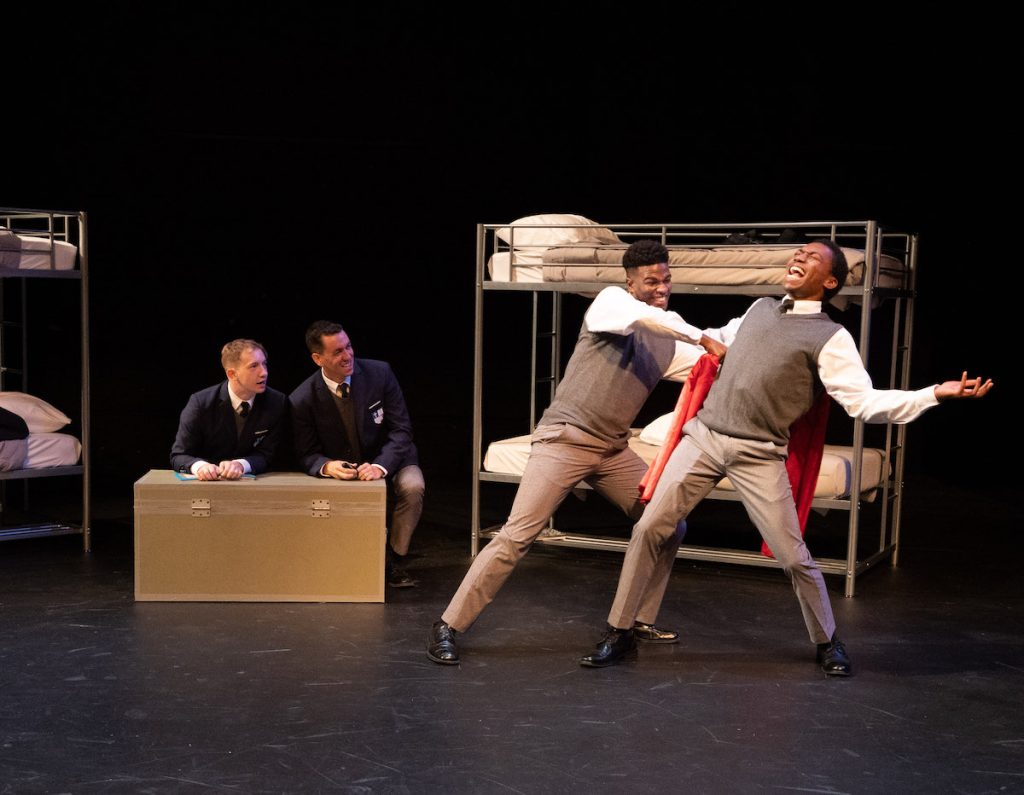 Spoiler alert: Romeo and Juliet die. So do Tybalt and Mercutio. And though occasionally it gets cut out, so do Lady Capulet and Paris. But hey — we’ve known that for 400 plus years.

Originally staged by director Joe Calarko in the late ’90s, “Shakespeare’s R & J” takes the text of Shakespeare’s most famous play and flips it on its head, employing a device Shakespeare himself loved by turning Romeo and Juliet into a play within a play. Four students in a boarding school find a copy of “R & J,” and slowly read and play their way through the script.

The meta-textual literary conceit of students finding a script or book and working their way through it is not a breakthrough in narrative technology, but I’ve never seen it deployed so effectively. Much of that is the setting: an all male parochial boarding school, which implicitly frowns on the investigation of passion and love detailed in Shakespeare’s script, and absolutely frowns on the exploration that comes from four young men exploring the tragic story. This play is not a “version” of Romeo and Juliet, rather it is a different play, though one that is 90% taken from Shakespeare’s script. This play also includes the conjugation of Latin verbs, prayer, a few sonnets and lines from a “Midsummer Night’s Dream.” There are also volumes of unspoken meaning in silent interactions between the characters, including a large portion of the outside-of-the-play story and plot. I love that. If you’re a purist, you might be miffed. Go anyway.

I feel I should explicitly state that this play might be very triggering for people with religious trauma. Likely in a town as Catholic as Louisville, many of us in the audience can personally attest that even minor trespasses in a parochial school in the mid-to-late 20th century brought swift physical punishment. I personally found this to be well worth the sometimes difficult trip down memory lane. The particulars of this setting keep plausible life threatening violence real. Hate crimes against queer people often end in death. Still. This play was originally produced very close to the time of the murder of Matthew Shepard, and the rates of suicide among queer youth have been and remain tragically high. So Shakespeare’s tragedy is a play within a play, but the possibility of real tragedy is miasmic.

This production, directed by Kentucky Shakespeare’s Producing Artistic Director Matt Wallace, is extraordinary. The characters are listed solely as Student 1 (Brennen Amonett), Student 2 (Shaquille Towns), Student 3 ( Zachary Burrell) and Student 4 (Tyler Tate). Each student takes on a myriad of roles (I lost count honestly) including various servants and hangers on, but each is also responsible for several of the major roles in the play. Student 3 takes on Friar Lawrence, Mercutio, and Lady Capulet; Student 4 takes the Nurse and Tybalt; Student 2, Juliet and Benvolio. Student One’s only large character is Romeo, and in many ways he is the play’s main character.

It’s worth noting that over all this is also one of the funniest iterations of Romeo and Juliet I’ve seen. In many ways, adolescent boys are an ideal audience for Shakespeare, the number of dick jokes in the first scene of Romeo and Juliet rivals the raunchiest of Hollywood’s gross-out comedies. In truth, right up until Mercutio gets stabbed, Shakespeare’s script is essentially indistinguishable from one of his comedies. Shakespeare was no dummy (and neither is Wallace). The heights of agony an audience can experience shoots through the roof if you make them feel joy first.

Tate particularly soars in his comedic material, turning the scenes between Juliet and the Nurse into a full on laugh riot. Burrell excels in his comedic moments as well, bringing a lot of joy and jollies to Mercutio and Lady Capulet, but Calarko’s cutting gives Student 4 a lot more room for silliness.

Beauty and tragedy are never sacrificed for humor, though. Towns’ Juliet is a precarious balance. There is a gentle and sweet lyricism to many of the moments, but there is also an anger at the edge of violence in a few of the final moments of the play. A full reading of the gender dynamics in the play belongs in a separate and much longer article. But Towns’ portrayal of the “female” protagonist takes “masculine” and “feminine” qualities and blends them in a way that never slows down the play, but still asks enough questions about gender, gender performance and socially-dictated gender presentation to fuel a flock of English students’ theses.

Towns also gets a few moments as Romeo’s friend Benvolio, and eagle-eyed Kentucky Shakespeare fans might recall in those moments he’s reprising a role he played for the company in their 2021 touring production. You know I love some extra-textual juxtaposition.

As good as Tate, Burrell, and Towns are — and they are great — Brennan Amonett is nothing short of a revelation. His command of Shakespearian language rivals and surpasses performers with decades more experience. He renders the metaphor, humor and dense internal use of sound in a way that is beyond naturalistic; it’s downright conversational. But he never sacrifices the beauty or poetry of Shakespeare’s dialogue.

I highly doubt there will be anything on stage in Louisville in the next year as beautiful, moving and ultimately as socially important as this play. Earlier, I mentioned the possibility that this play could be triggering to people with religious trauma, and it no doubt could be, especially to queer audience members who experienced violence in religious settings. But what is the difference between being triggered and experiencing catharsis? Maybe catharsis comes from being triggered in a safe place, then offered a guide through a story that recognizes and validates shared trauma, and offers a denouement of hope and healing. I found this piece to be highly cathartic.

On an extra-textual level, Kentucky Shakespeare producing this script, in a collaboration with the queer focused company Pandora Productions is an explicit statement of support for the queer community, one that I know I at least have been waiting to see. Our community includes all the queer teenagers out there still fighting through love and fear, just like the students in “R & J,” and the teens of Verona in Romeo and Juliet. And sometimes the difference between suicide and survival lies solely in feeling seen.