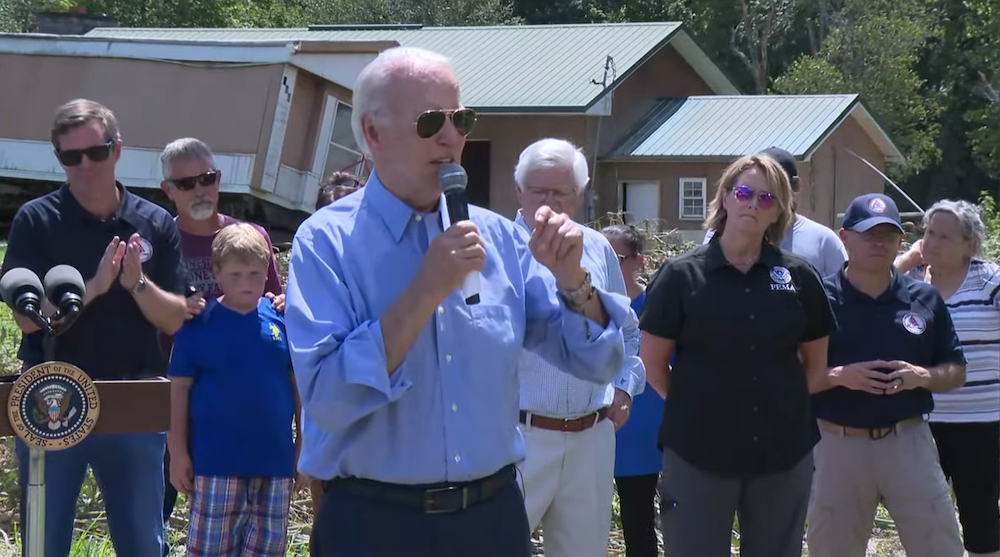 During a Monday visit to survey damage from the severe flooding in Eastern Kentucky that left at least 37 people dead, President Joe Biden said that the federal government is “staying” until the region is repaired.

The president, along with U.S. First Lady Jill Biden, Gov. Andy Beshear and Kentucky First Lady Britainy Beshear, spent Monday touring the region where 14 to 16 inches of rain fell from July 26-29 leading to hundreds of people being displaced from their homes.

On July 29, the president approved federal aid to Eastern Kentucky counties impacted by the floods.

Over the weekend, Biden also ordered the federal government to cover 100% of the cost of certain emergency services for affected communities for a 30-day period.

In December of 2021, Biden visited Western Kentucky after a deadly tornado struck multiple communities in the region, killing 80. During that visit, Biden also pledged that the U.S. government would cover 100% of the disaster relief costs for the first 30 days.

During Monday’s press conference with the president, Gov. Beshear praised Kentuckians for pulling together during times of disaster. He also announced that people who are currently looking to help should turn to donating money, as there’s currently a surplus of supplies and water that have been given.

“We have seen an outpouring of unconditional love from across the country,” Beshear said. “Millions of dollars and so many donations have come in that we have to ask, please, turn to monetary donations. We have seen so much water, so many clothes and the rest, we’re having to find warehouses counties away just to put them in it.”

Donations can be made via the state’s Team Eastern Kentucky Flood Relief Fund.