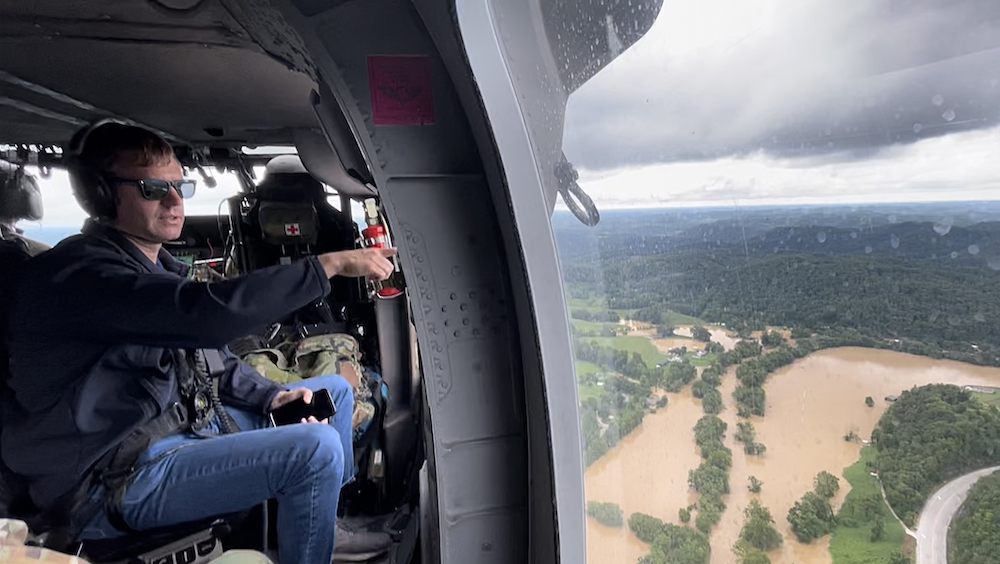 [Editor’s Note: This story was originally published by Inside Climate News. Visit their website at insideclimatenews.org]

In February 2020, heavy rain caused flooding across Central and Eastern Kentucky, and mudslides in Eastern Kentucky, raising the Cumberland and Kentucky rivers to their highest levels in decades. In an essay lamenting the suffering, Kentucky author Silas House wrote of residents of a Harlan County trailer park having to escape rising waters with “only the clothes on their backs and their babies on their hips,” hundreds of damaged homes and the governor declaring a state of emergency.

In December 2021, the deadliest tornado outbreak in state history killed 80 people. One of the tornadoes cut a path on the ground for more than 165 miles across multiple states, and was as much as a half-mile wide when it tore through Western Kentucky.

On Thursday, as images and videos of the horrific nature of the catastrophic flooding in the mountain valleys of Eastern Kentucky spread on social media and across the national news, Gov. Beshear recited the details of the latest disaster as he knew them: Some counties were half underwater, double-digit deaths were expected, the flooding was the worst he had seen in Kentucky in his 44-year lifetime.

Then he said this:

Some of his supporters embraced Beshear, a Democratic governor, for what has become one of his trademarks, and strengths, as he prepares for a tough 2023 re-election battle in an otherwise Republican-dominated state public appearances where he displays a degree of empathy worthy of former president Bill Clinton.

But others on Twitter were quick to attack him, saying that the answer to the “why” was obviously climate change, an issue the governor rarely discusses. His statewide energy plan, for example, does not include any mention of the words “climate change,” though he loves to talk about two planned new manufacturing plants for electric vehicle batteries, to be built along the Interstate-65 corridor south of Louisville.

Beshear is among the most popular Democratic governors in the country, with some polls giving him a 60% approval rating. But he is also hemmed in politically by the supermajority of Republicans controlling the Kentucky General Assembly. They are unsympathetic to the climate crisis in a state where Republicans and Democrats alike have long backed coal mining and coal burning as part of the state’s identity, even though Kentucky has been shedding coal mining jobs for decades.

“Given his close margin of victory in the last election and the importance of the coal industry to the state, I just don’t think he can afford to mention climate change,” said Melissa Merry, a University of Louisville political science professor whose research area includes environmental politics. “It will make him an easy target for his political opponents.”

Beshear defeated incumbent Matt Bevin, an unpopular Republican, by only about 5,000 votes in 2019.

Merry said, “Beshear, like other Dems, has incorporated some environmentally friendly priorities into his agenda, like building infrastructure for electric vehicles.” But, she added, “He’s not going to call that a solution to climate change or in any way suggest that it threatens the status quo way of doing things, politically or economically.”

The state’s legislature has taken away some of the governor’s powers, Clayton said, but he added, “Andy is a noncontroversial kind of guy,” and that seems to be working for him, given his favorable poll numbers.

Another Southern governor, Roy Cooper of North Carolina, driven in large part by his state’s experience with devastating hurricanes, has been able to put forward a climate agenda even though his legislature, also is controlled by Republicans. But Clayton describes North Carolina as “more progressive” than Kentucky, with an evolving electorate as newcomers move into the research triangle around Raleigh, Durham and Chapel Hill, and the rapidly growing and increasingly diverse Charlotte metropolitan area.

“With that said, I don’t know about this one, and whether it is or is not connected. And I don’t want to cheapen or politicize what these folks are going through,” the Courier Journal quoted Beshear as saying.

On Friday, with extreme weather making headlines seemingly everywhere — drought and fire in California, deadly flooding in St. Louis, a heat wave in Europe — and a vast swath of eastern Kentucky’s valleys and hollows underwater, Inside Climate News went to four top climate scientists and asked them how they would answer Beshear’s question of “why we keep getting hit here in Kentucky.”

Here’s what they said:

Jonathan Overpeck, earth and environmental sciences professor at the University of Michigan:

“It’s clear now to climate scientists that human-caused climate change has warmed the atmosphere significantly, and that this warmer atmosphere can—and often does—hold more moisture. So when it rains it can rain harder and more intensely.

“This means the risk of flooding is going up dramatically over much of the planet where people live, and Kentucky is one of those places. The evidence is clear that climate change is a growing problem for Kentucky and the surrounding region—more floods like this week, and more floods when wetter tropical storms track north over the state.

“Kentucky also got a taste of dangerously high temperatures earlier in the week, and not too long ago, the state was ravaged by tornadoes. Heat waves are clearly getting more dangerous and deadly due to human-caused climate change, and there is growing evidence that thunderstorms are getting supercharged by the warming atmosphere as well, and that can mean higher tornado risks.

“My heart goes out to the people of Kentucky who have been impacted by the worsening climate crisis in so many ways, and the governor needs to acknowledge that there is more that he and his fellow politicians can do to stop this worsening crisis.”

Marshall Shepherd, professor and director of the Atmospheric Sciences Program at the University of Georgia:

“The attribution literature is clear about certain extremes. The DNA of climate change is increasingly [found] in today’s heat waves, rainstorms and droughts. In a nutshell, the naturally-varying weather is getting a boost in the same way baseball players did in the steroid era. Natural variability and anthropogenic-related climate change happen together. It’s not either/or.”

“I have a little bit of sympathy for [Gov. Beshear] being in a difficult position. But he’s not doing the citizens of Kentucky any favors by gilding over the truth and sort of giving the impression that we can’t say the ‘why,’ we can just say, ‘Oh, this is a sad thing, and we should try to make these people’s lives better.’

“We’ve had hurricanes come into North Carolina, and those are more powerful because of climate change. The heat waves are stronger and more likely and last longer because of climate change. And the same thing with these kinds of flooding events. This is extremely well-known that the ‘why’ is because we pump more greenhouse gases into the atmosphere, mostly carbon dioxide and methane, we make the planet warmer, and a warmer planet has more extreme weather. This is the kind of stuff we’ve been forecasting for decades. We’ve been watching it happen now, because of our failure to rein in emissions.

“We know exactly why this kind of stuff is happening more often to people across the United States, in both red states and blue states. And it’s not going to solve the problem by pretending that we don’t know the cause of it. We know the cause. And it’s fossil fuel use.”

“Why are these kinds of massive rain storms and flooding events happening more often than they used to? By definition, that is climate change. Climate change is a difference in the statistics of the weather. So the rain on a given day in a given place — that’s the weather. The trends in horrific flooding, that’s climate change.

“But in Kentucky, and not just Kentucky but pretty much everywhere east of the Mississippi, there’s this dramatic increase in the number of these extremely heavy rain events. That’s climate change. You know, it’s not even controversial. There’s no attribution required.

“Now as to why that’s happening. It’s because we’re setting carbon on fire. And that adds to the heat holding capacity of the earth. And that increases the temperature and there are all these knock-on effects. So, unfortunately, it will get worse and worse and worse, until we stop making it get worse.

“And by that, I mean, we have to stop setting carbon on fire. Full stop.”