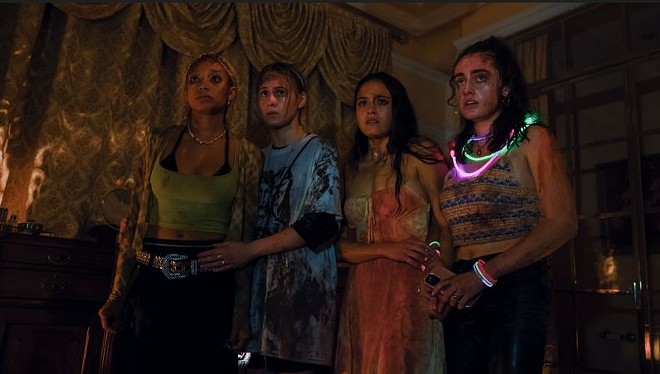 Imagine living a life where the scariest moments involved forgetting to refill your Xanax prescription or worrying that you might have overshared on a group chat.

As truly frightening horror movies go, Halina Reijn’s “Bodies Bodies Bodies” is a bust, but as a scalpel-sharp, finger-on-the-pulse dissection of today’s mid-20s culture, her sophomore feature is a riotous affair sparkling with caustic insight.

In all honesty, the entirety of “Bodies Bodies Bodies” can be summed up best by the fact that it co-stars Pete Davidson. If ever there has been a poster boy for privilege and WTF celebrity, it’s Davidson. He’s an actor for whom I have yet to see any actual talent, but yet his smarmy mug is firmly entrenched with this generation’s zeitgeist, as confounding as it may be.

There’s Sophie (Amandla Stenberg), the popular one, who required an intervention and her father’s wealth to get whisked away to rehab. And Alice (Rachel Sennott), who has spent years trying to attract listeners to her podcast about hanging out with the wealthiest, coolest kids, while picking up older men like Greg (Lee Pace) on Tinder. And Emma (Chase Sui Wonders), the pretty one who thinks everyone is in love with her. And, finally, Jordan (Myha’la Herrold), the mean one, whose poison-tipped tongue keeps her arms-length-away from genuine relationships.

The odd duck here is Bee (Maria Bakalova), a foreigner in every sense of the word. Not only does she hail from another country, but her youth was forged from an existence far away from the trust funds and silver spoons of Sophie’s “rich” rich crew. She’s only present so Sophie can show off to her so-called friends that she’s capable of “dating” someone for six weeks and counting.

Bee is almost an unnecessary addition to this bitter tea laced with spoiled milk. I understand her presence as the gateway to introduce viewers to the main characters; I just wish there was more substance to her role to justify not killing her off early and brutally.

Alas, the joy of discovery in “Bodies Bodies Bodies” is watching these eight friends unravel over the course of one long night during a drug-fueled hurricane party that turns into a pitch-black confessional.

The script by Sarah DeLappe zings and zaps with buzzwords aplenty, whether it’s taking shots at new-age-y light therapy, the pitfalls of online dating or the treacherous road to good mental health through self-awareness.

The actors all commit fully, which helps make dialogue such as “Don’t call her a psychopath, that’s so ableist,” or “You schedule everything in your Google calendar, even sex, because you have no soul,” strike like precision-guided missiles.

Ultimately, “Bodies Bodies Bodies” is less concerned with visual bloodshed, although there is some decent but restrained gore, and far more fascinated with the truly horrific bullshit that young adults willfully and willingly subject themselves to on the daily.

After all, it takes a special type of person to understand just how hurtful it can be to have their parents called upper middle class.