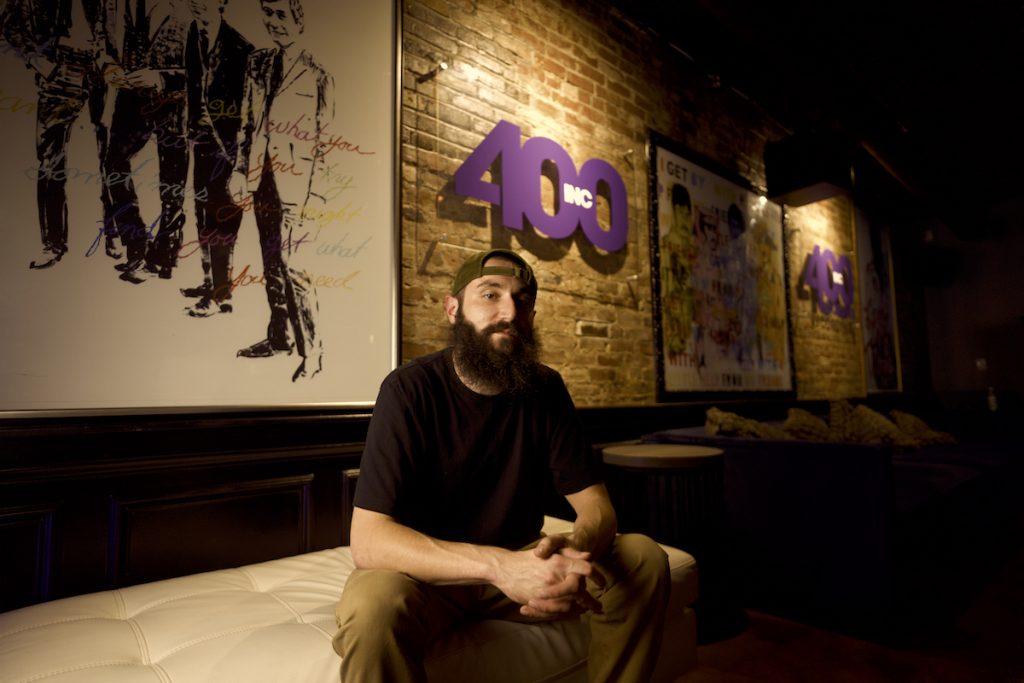 Nick Meredith’s track record in Louisville’s music scene is a long one, dotted with notable moments that positioned him well for his latest turn as the new owner of 400 Recording.

“The former owner, Marcus Withers, told me he was going to sell the studio, and my plan had always been to own a studio. I feel like I’ve been running studios for years already, in multiple locations,” said Meredith. “People tell me all the time, ‘Why don’t you just open your own spot? You’re the glue holding all this together,’ things like that. I’ve been working out of 400 since 2019.”

400 Recording, located on 400 E Oak Street, opened in 2017. While five years isn’t a long time in business, 400 has made a significant impact. So much so that it won “Studio of the Year” in the Kentucky Urban Entertainment Awards this month. The KUEA are 60% voter- and 40% board-selected.

“400 fills in some puzzle pieces that were missing from the city. Some other studios have more expensive equipment and more experienced engineers, but there’s no place else in the city that’s crafted for young, hungry artists that need more than just somebody to hit the record button. They need help developing, and linking up with the right people so they can progress in their careers and take this music stuff seriously,” said Meredith.

Louisville artist OS Critic has been recording at 400 since it opened, following engineer Slim Doja there.

“The best studios aren’t made by the best equipment,” he said. “In my opinion, the best studios are built off of passion. 400 is a place filled with creatives that love what they do. It’s not just a recording studio. 400 is a place of opportunities. They have open arms and are willing to let new engineers come in every day to either start or develop their careers. I’ve seen plenty of engineers and artists take over the city from inside those walls. There’s so much comfort and love there, it starts to feel like… family.”

Another local rapper, Anna B, concurs. “400 is home. It’s a safe place for me, a place to be disconnected from the negative world. I look at the booths as walk-in diaries, ready for my rhymes.”

OUTREACH TO THE CITY

400 has gained a reputation for being a mecca to the rap community, and that will continue. At the same time, Meredith plans to reach out across genres.

“We want to make this a home for artists looking for development, no matter what genre they are in,” Meredith said. “We’re going to do marketing outreach to all the music communities, although, to build the brand and build the name, there’s more to it than just marketing. I want it to be that when somebody who makes music casually talks about recording or talks about needing certain things to get their music career going, people are like, ‘Oh, you should check out 400 Recording.’”

Louisville rapper Truveli spends a lot of his time in Los Angeles, but comes back to 400 to record. Even with all the opportunities and options in L.A., his home studio still has that magnetic power to keep him connected, and it’s because of Meredith, whom he’s known for four years.

“My friend Josh Newton knew I was making music and he took me over to 400 in 2018,” Truveli said. “A guy named Ezra opened the door for us and I ended up meeting Nick, who was engineering at 400 way before he owned it. Nick became a huge component in my progress as an artist. Once he believes in an artist, he’s the best producer. He’s the best engineer. He knows what it’s like to come from the bottom to the top. He’s been around everybody in the music scene. It’s amazing that he owns the studio now because he was doing all the work for the studio for a long time. He’s been running things already,” he said.

THE ROAD TO STUDIO OWNERSHIP

Meredith is confident the studio will actualize as a hub that serves many genres organically because of the relationships he’s built over ten years. While he can’t remember the exact moment he knew a career in music was in his future, there are recollections from his younger years that make it make sense.

Before there were streaming apps with playlists, there was jamglue.com. The site allowed him to make remixes and mashups, “taking an instrumental and adding a ridiculous cast of rappers that had available a capellas. I put Linkin Park’s ‘We Made It’ with ‘A Milli’ by Lil Wayne and I still get text messages every year about it from people I haven’t seen in forever.” Back in the day, friends would sync their iPods to Meredith’s computer so they could listen to his productions.

Before long, Meredith started DJing. He learned how to produce and engineer — which is now his mainstay — and along with a group of friends that includes Ace Pro of The Homies, created the collective Private Garden. Even at that young age, Meredith had a vision for excellence. He wanted to see the music scene grow, but wouldn’t put his energy into a project just because it was local. It had to be really good.

“When we first started Private Garden, we were going to make t-shirts that said ‘Support Local Music’ but the word ‘local’ would be crossed out and above it the word ‘dope’ would be added. Ideas like that were a big reason [Jack] Harlow messed with us and kinda allowed us to take him on under our wings,” Meredith said. “Private Garden was always collaborative and we didn’t just keep to ourselves, but we also told you if we didn’t think the music was good.”

In the formative years of Jack Harlow’s music career, Meredith became his DJ, and he’s still widely known for that in the city. But Meredith doesn’t ride on coattails or associate with talent as a flex.

“I’ve played many different roles in music. Jack’s my brother more than anything,” Meredith said.

His focus continues to be on excellence and constant growth: “I want people at my neck with me as the owner at 400. I want the people around me to say, ‘Dude, this is a problem. You need to fix this. Where are we thinking about upgrading?’ I don’t want a bunch of engineers in here who are just going with the fl ow and not putting any thought into how this place can be better and what the next things we can do are to improve it. I’m like that with everything I do.”