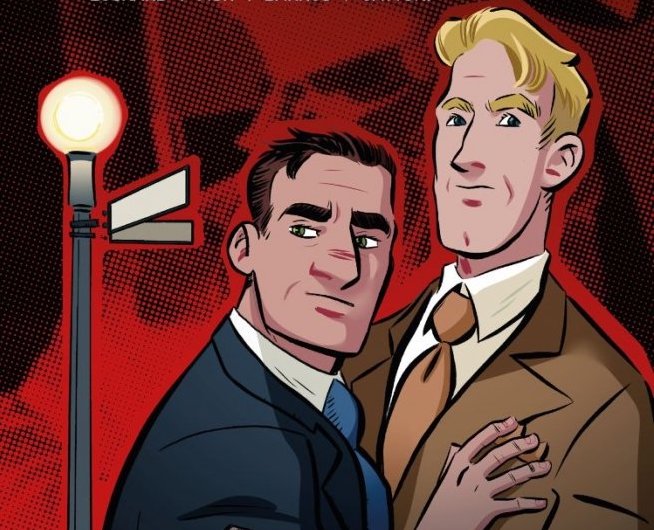 If a summary includes the phrase “queer historical romance,” you bet your buns I’m going to check it out. “Liebestrasse,” written by Greg Lockard, with art by Tim Fish and Hector Barros, is a love story set in the tumultuous political atmosphere at the end of the Weimar Republic.

Samuel is an American working in Berlin in 1932. While perusing an art museum he runs into a handsome blonde man, only to get truly acquainted at a backdoor gay bar. Philip introduces him to an entire underground community where they can be openly themselves, despite the rise of Nazism. While Philip dreams of an escape together, Samuel insists that they must fight against fascism.

20 years later, Philip returns to Berlin to find the man he loved, the man he lost in the chaos of the fall of the Weimar Republic. “Liebestrasse,” which translates to “love street,” refers to the last place they were together, and is a story of forbidden love in a time where marginalized people were struggling to survive, and the guilt of those that do. If you’re looking to learn more about the genocide of the queer community during World War II, it also includes a list of books and films about the topic.

In the original run of “Fantastic Four,” issues 347, 348 and 349, the “new Fantastic Four” made their debut. That was in 1990, and since then, fans have lamented that Marvel never gave that legendary team their own series. Now those fans can rejoice as the awesome team of Spider-Man, Hulk, Wolverine and Ghost Rider are finally getting at least five issues together in this limited series.

The “Hell in a Handbasket” storyline has a very colorful looking but dark-themed beginning. A lot of Marvel books will carry a teen or mature rating that seems questionable, but I think this one might be deserving of it. Long story short, something mystical happens, bringing our four heroes together in Las Vegas, not long after the timeline of those original issues. Something is afoot in Sin City involving priests, nuns, demons and the homeless who are living in underground tunnels.

The book is written by Peter David with artist Alan Robinson and outstanding colors by colorist Mike Spicer. Just the different personalities of the teammates is entertaining, but throw in some pretty serious goings-on and you’ve got a seriously fun comic! I hope the next four issues are as good as this one. We don’t want to disappoint fans who’ve been waiting 30 years for this!