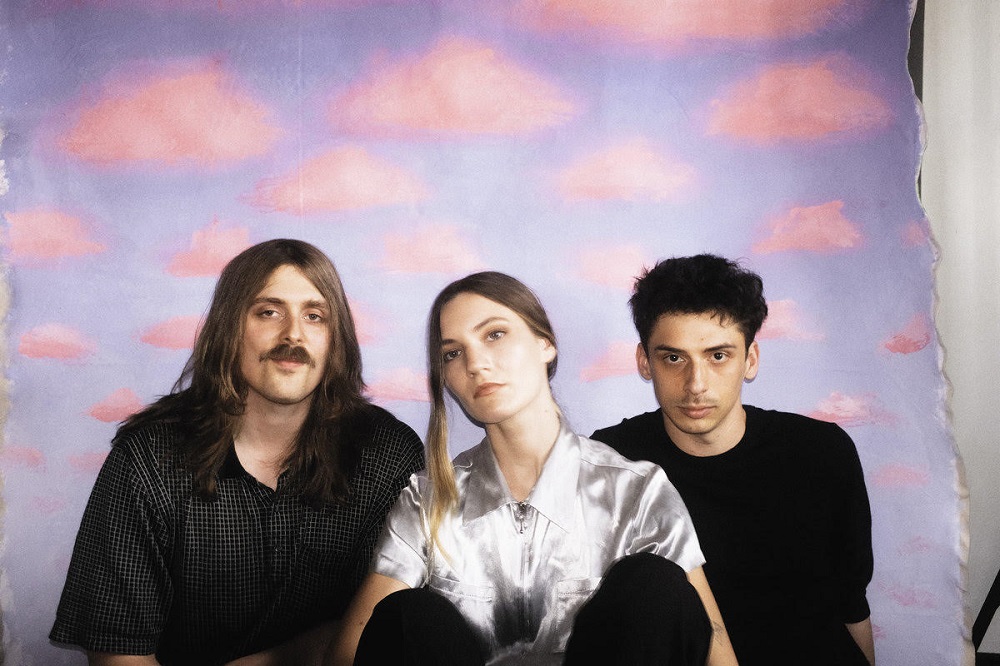 A lead single from the post-punk band Wombo’s forthcoming album was inspired by an accidentally existential quote from singer/bassist Sydney Chadwick’s grandmother. They were on a family road trip, zooming around a long roundabout, when her grandmother said, “We’re all just gonna meet ourselves at the end of this, aren’t we?” She meant it as a joke, although the phrase’s deep ambiguity stuck with Chadwick, who used the line as the basis for “Backflip,” an ominous, cutting track that ponders the slippery nature of time.

“So, it sounds heavy, but, in the moment, my grandmother didn’t mean for it to be such a heavy thing,” Chadwick said. “It was just kind of a colloquial thing. Just joking around, because we were going on this roundabout that was so long that we were just all sliding to one side of the car. She was just getting frustrated. She didn’t mean it in a deep, heavy way, but the song makes it way heavier.”

“Backflip” is one of the first three singles that are already out from Fairy Rust, Wombo’s third full-length album that is set to be released on July 29. Chadwick, along with Cameron Lowe (guitar) and Joel Taylor (drums) named the album for a play on words between Brothers Grimm and Hans Christian Andersen-style fairytales and the “failing infrastructure of our country.” Chadwick said that folklore has had a large impact on how she creates.

“That whole realm of fiction, since I was a kid, has heavily influenced me and my art throughout the years, and the way I construct melodies, especially from children’s songs and stuff, just keeping it simple,” she said. “It feels comforting.”

Wombo’s first album, Staring At Trees, was released in 2017, establishing their experimental and refreshing style that is familiar and peculiar at the same time, merging the intense, magnetic and awkward sounds of underground ‘90s indie punk with whole new dimensions, like almost-operatic vocals, and imaginative psychedelia. One thing that is easy to notice about the difference between their early music and what they are currently releasing is that the new stuff is equally as weird and offbeat, but the production is much more clean and vibrant. They recorded Fairy Rust over eight days with Nick Roeder, putting in about eight hours each day in at the studio.

“We were really well-rehearsed, so it was pretty smooth,” Lowe said. “We just found a good sound at the beginning and just rolled with it more.”

A big concern for them during recording was microphone placement and finding ways to create the tones and sounds that they wanted on the front end of the production process without overcommitting to mixing on the backend. They would do things like record the bass amp in a bathroom to create a bunch of reverb, but make it sound more natural.

“We were more hands off mixing this time,” Taylor said. “We got really good natural sounds.”

For the mixing, they shipped it off to Dave Vettraino, who they said did the perfect amount of tinkering with the tracks.

For the most part, Wombo has always considered themselves to be a live band — that they’re at their best during in-the-moment creation. Chadwick said that she sometimes wishes that they would just record live shows instead of making studio albums, but that they’re too meticulous with their sound to actually do that.

“We want that raw, live sound, but we are too perfectionist, and it’s always so complicated to get it right. But the sound has always been difficult to capture, what we feel like we sound like. We always thought we were a better band live than recording, but we’re hoping we’re getting better at the recording process. I just feel like we’re getting to know ourselves better.”

It’s apparent that Wombo is starting to figure out their search for the sound. Inch by inch, they’re finding that space in-between the fire and magic that can come from the stage and the twists, turns and ideas that can develop in the studio.