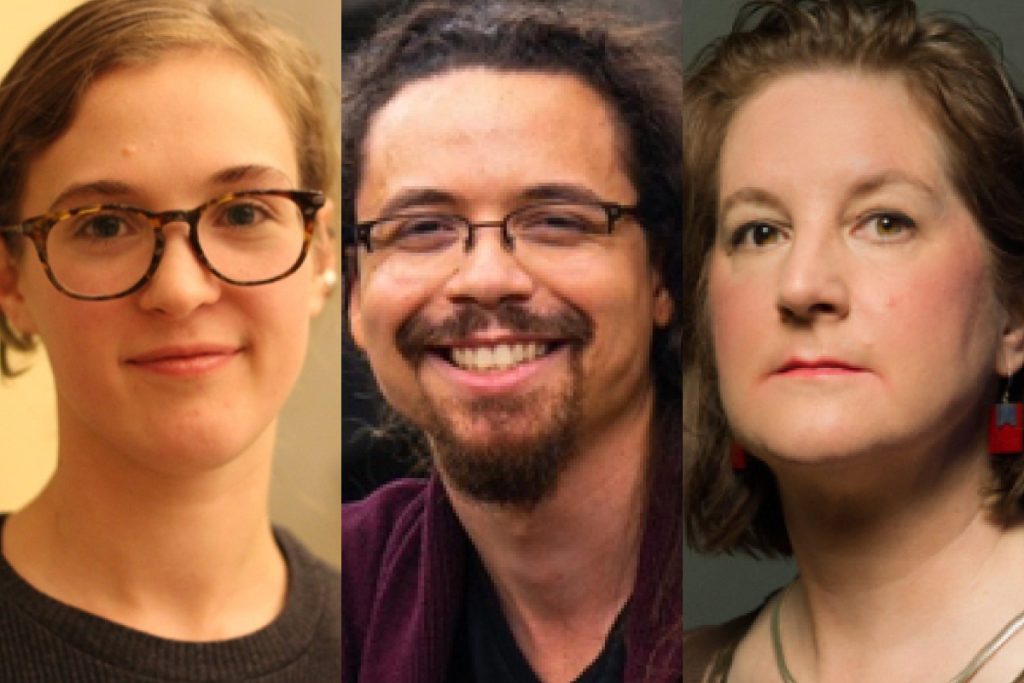 The inaugural group for the Louisville Orchestra Creator Corps has been announced.

The three creators selected for this initiative are Lisa Bielawa, TJ Cole and Tyler Taylor.

The creators will move to Louisville for the upcoming spring season of the Orchestra and live in the Shelby neighborhood for at least 30 weeks, serving as LO staff members with an annual salary of $40,000, plus health insurance, housing and a custom-built studio workspace.

“I was overwhelmed by the diverse talent of the 186 applicants for the initial year of the LO’s Creators Corps,” Louisville Orchestra Music Director and 2022 Musical America Conductor Of The Year Teddy Abrams said in a release. “I believe this reflects the widespread desire for artists to build deeper and more impactful relationships with civic institutions and the communities they represent. With an extraordinarily dedicated selection committee, we were able to find three exceptional creators to join us in Louisville for the 2022-23 Season. Lisa, TJ, and Tyler are examples of consummate 21st-century artist-leaders; their musical talents match their intellects and they all share a remarkable sensitivity to the needs of the world beyond the boundaries of contemporary musical composition.”

During their time in Louisville, the creators will compose new works and participate in educational activities, and be “active, engaged citizens of their neighborhood.” All three creators will each have preexisting work performed on an opening night program on Sept. 17. The world premieres of their new works will be performed in Louisville during the 2022-23 season on Classics programs on Jan. 14, March 4 and March 11.

The Creators Corps program is being funded by a three-year, $750,000 grant from the Mellon Foundation and additional individual donors locally and nationally.

This is an historic and immensely consequential moment for the LO, and I can’t wait to begin collaborating with these three outstanding creators,” Abrams said.

Here are bios of each member of the Creators Corps Composers that were provided by the Louisville Orchestra.

Composer, producer, and vocalist Lisa Bielawa is a Rome Prize winner in musical composition. She takes inspiration for her work from literary sources and close artistic collaborations. Her music has been described as “ruminative, pointillistic and harmonically slightly tart,” by the New York Times, and “fluid and arresting … at once dramatic and probing,” by the San Francisco Chronicle. She is the recipient of the 2017 Music Award from the American Academy of Arts & Letters and a 2020 OPERA America Grant for Female Composers. She was named a William Randolph Hearst Visiting Artist Fellow at the American Antiquarian Society for 2018 and was Artist-in-Residence at Kaufman Music Center in New York for the 2020-2021 season.

Bielawa has established herself as one of today’s leading composers and performers, one who consistently executes work that incorporates community-making as part of her artistic vision. She has created music for public spaces in Lower Manhattan, the banks of the Tiber River in Rome, on the sites of former airfields in Berlin and in San Francisco, and to mark the 30th anniversary of the fall of the Berlin Wall; she composed and produced a twelve-episode, made-for-TV opera that featured over 350 musicians and was filmed in locations across the country; she was a co-founder in 1997 of the MATA Festival, which continues to support young composers; and for five years she was the artistic director of the San Francisco Girls Chorus, bringing the chorus to the NY PHIL BIENNIAL and introducing the young performers to the music of today through numerous premieres and commissions from leading composers. From 2019-2022, Bielawa was the founding Composer-in-Residence and Chief Curator of the Philip Glass Institute (PGI) at The New School’s College of the Performing Arts.

In addition to performing as the vocalist in the Philip Glass Ensemble, Bielawa performs in many of her own works as well as in the music of John Zorn, Anthony Braxton, Michael Gordon, and others. She will have her third residency as a performer/composer at Zorn’s venue The Stone in November 2022. She recently made her orchestral conducting debut leading the Mannes String Orchestra in a special presentation by the Philip Glass Institute, featuring her music, music by Jon Gibson and David T. Little, and Philip Glass’s Symphony No. 3.

Born in San Francisco into a musical family, Lisa Bielawa played the violin and piano, sang, and wrote music from early childhood. She moved to New York two weeks after receiving her B.A. in Literature in 1990 from Yale University, and became an active participant in New York musical life.

TJ has also been a singer-songwriter, producer, and engineer in the fully electronic synth-pop band Twin Pixie, which focuses on making music at the intersection of queerness, pop culture, and the supernatural.

TJ has participated in composition programs including the Minnesota Orchestra Composer Institute, the Lake Champlain Chamber Music Festival, and the Next Festival of Emerging Artists, and studied with Samuel Adler for a summer at the Freie Universität Berlin. They have won two ASCAP Morton Gould Young Composer awards (2014 and 2020), including the Leo Kaplan Award in 2020 for their string sextet ‘Playtime’.

​TJ has also been involved with music-related community outreach projects. They collaborated with bassist Ranaan Meyer as an orchestrator on his project The World We All Deserve Through Music, and with First Person Arts by co-curating and performing in a musical story slam. During a yearlong ArtistYear Fellowship (2016-17), TJ was able to co-run and collaborate in musical performances and songwriting workshops with residents of Project HOME, a Philadelphia-based organization fighting to end chronic homelessness.

TJ received their Bachelor’s degree in composition from the Curtis Institute of Music, and studied at Interlochen Arts Academy. Their mentors include John Boyle Jr., Jennifer Higdon, David Ludwig, and Richard Danielpour.

Tyler Taylor, a Louisville native, is a composer-performer whose work explores the different ways identity can be expressed in musical scenarios. Common among these pieces is a sense of contradiction – sometimes whimsical, sometimes alarming – that comes from the interaction of diverse musical layers. This expression of contradiction likely comes from his being a person of mixed race; being raised on hip hop and R&B while inheriting a European tradition of Western art music as his primary form of musical expression in spite of having little or no other cultural ties to Europe; and pursuing a career in a field that generally lacks representation of his demographic.

Tyler has recently held fellowships at the National Orchestra Institute and the Bowdoin International Music Festival. During these residencies he had several works performed, including two premieres, and worked alongside Marin Alsop, Derek Bermel, Andreia Pinto Correia, and many other distinguished artists. His work has been recognized by awards including the BMI Student Composition Award (2019) and the Howard Hanson Ensemble Prize (2017, 2016), and has been featured during the College Orchestra Directors Association Convention (2022), the University of Louisville Annual New Music Festival (2018, 2017, 2016) and the Midwest Composers Symposium (2019). He has recently been commissioned by the Washington and Lee University Orchestra, the Chicago Composers Orchestra, the Albany Symphony Contemporary Ensemble, the Youth