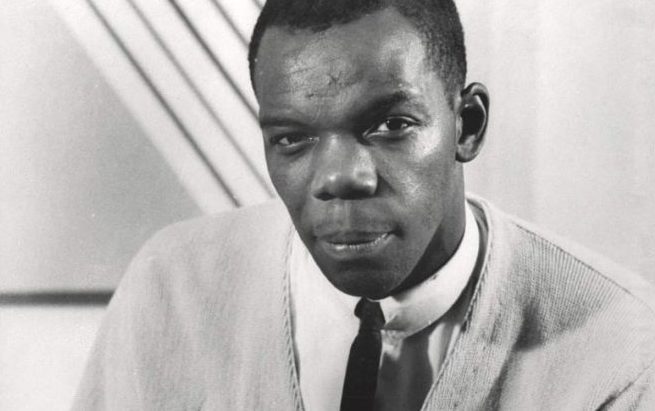 Painter Sam Gilliam has died. He was 88. According to the New York Times, he passed away at his home on Saturday, June 25, from renal failure.

Gilliam was an Abstractionist who gained fame through his association with the Washington Color School in D.C. Though born in Tupelo, Mississippi, Gilliam lived in Louisville, Kentucky, for much of his young life, attending Central High School and UofL. He was in the second group of Black students admitted to the university and graduated with his B.A. of Fine Arts in 1955. After, Gilliam served in the military, but later returned to Louisville to finish his Master of Arts at UofL.

Gilliam left Louisville and moved to Washington D.C. after marrying Dorothy Butler, a fellow Louisvillian who was the first Black reporter at the Washington Post. After his marriage to Butler, Gilliam spent much of his life with Annie Gawlak, who was his partner for 35 years before they were married.

Gilliam’s work was heavily influenced by the Civil Rights Movement and the plight of Black people in America. Though he focused on abstract expression, he often created works to speak to these struggles, and despite his work being shown in major galleries and museums, he kept ties to his communities throughout his career.

Gilliam commented about this in a 2018 interview with José da Silva in The Art Newspaper. “The expressive act of making a mark and hanging it in space is always political,” Gilliam said. “My work is as political as it is formal.”

He took inspiration from many German abstractionists and many of the Abstract Expressionists, Fauvists, and Cubists of the early 20th century.

Gilliam introduced the draped canvas and explored this as a medium suspended from ceilings, walls, or on floors through much of the ‘60s and ‘70s. Gilliam grew fond of jazz and let his inspiration move him to other mediums such as aluminum, quilts, and collage work.

In 2006, the Speed Art Museum held a retrospective of Gilliam’s work in conjunction with three other museums: the Corcoran, the Telfair Museum of Art in Savannah, Georgia, and the Contemporary Arts Museum in Houston.

In 2021, Gilliam’s work, “Carousel Form II “(1969) was hung as part of the “Promise, Witness, Remembrance” show that honored the life of Breonna Taylor. The piece had been part of the Speed’s permanent collection since Gilliam gifted it to the museum in 2013.

Gilliam introduced a show of Tondo paintings one month before his death — his final solo show as a living artist — at the Hirshhorn Museum and Sculpture Garden in Washington, D.C.

People familiar with Gilliam had plenty to say about his work and life.
Speed Director Raphaela Platow’s public letter said about Gilliam, in part, “It is with profound sadness and sense of great loss that I share with you the passing of one of our most beloved and groundbreaking artists, Sam Gilliam.

“The Speed Art Museum has long collected the artist’s work, with seven career-spanning examples in its collection. The Museum has also hosted three exhibitions of his work over the past sixty years: Sam Gilliam: A Retrospective; Construction: An Installation at the J.B. Speed Museum by Sam Gilliam; and Sam Gilliam: Paintings and Works on Paper.”

She also spoke about his connection to Louisville and his work as an artist, and closed her letter with this: “Sam’s passing is a tremendous loss for the Speed and the arts community in Louisville and at large. We send our deepest condolences to his family and friends during this time of mourning and will forever celebrate the artist’s artistic legacy.”

LEO reached out to a few of his contemporaries and they had this to say:

“I knew Sam for over 40-some years. I first learned about Sam when I became a member of the Louisville Art Workshop in 1969. I knew he became quite the artist who took the canvas from the stretcher and create a new way to see paintings. I will never forget spending time in DC for a luncheon he hosted for artists that were in town for an art conference. There we were together sitting on a couch, and I was between Sam and the Harlem renaissance sculptor Richmond Barthé. What an honor that was — sitting with these giants of the art world.

Our last encounter was at the Speed Museum, when we were together on stage with Bob Douglas, William Duffy, and [Elmer] Lucille Allen talking about the Black arts scene in Louisville. That was the last time we would see other in person, but we did talk on the phone a number of times. I thank God I was able to be in his presence and he will be sorely missed in the art world as we know it.

‘Peace my brother. Now you are with G.C. Coxe and Kenneth Victor Young, all former members of Louisville Art Workshop. I know you are talking art.’”

“Sam Gilliam and I were both students at Central High School (the only public school for African Americans). I graduated in 1949 and Sam graduated in 1951. I attended Louisville Municipal College (a UofL college for students of color) from 1931-1951. In 1951, the Day Law was rescinded and Louisville Municipal College closed. I could not afford tuition at UofL, so I went to Nazareth College (now Spalding University) for my Junior and Senior year. I graduated with a General Education degree in Chemistry and Mathematics. I did not get involved in the arts in the late ‘70s and early ‘80s. I eventually received a Masters of Art in Ceramics and Fiber in 2002 after I retired as a chemist from Brown-Forman. Sam’s sister Lillian Gilliam and I both graduated in 1949 and his older sister, Lizzie Gilliam and I attended Louisville Municipal College.

I love Sam’s suspended wall hangings. I was reminded of him when I had a fiber piece suspended at the Gilda’s Club at the 18th Street YMCA. And I also had a stenciled wall hanging suspended in an exhibition at the Susan Moreman Gallery.”

“As the art world continues to process Sam Gilliam’s passing, my heart goes out to Mr. Gilliam’s family and friends in Louisville, Kentucky. Sam Gilliam may be internationally known for his groundbreaking-style draped canvases associated with Washington Color School movement but, for some, he is also well remembered for his friendships with Louisville luminaries including Professor Robert Douglas, Ed Hamilton, and William M. Duffy, as well as the former Hite art students Bob Thompson and Kenneth Victor Young (and G. Caliman Coxe). While Gilliam’s time in Louisville may be considered short, his impact on the Louisville modern art scene can still be felt today. While we grapple with this tremendous loss, there is solace knowing these memories of his childhood friendships, and artistic leadership in the midcentury Black art scene in Louisville, will continue to live on, forevermore.” •