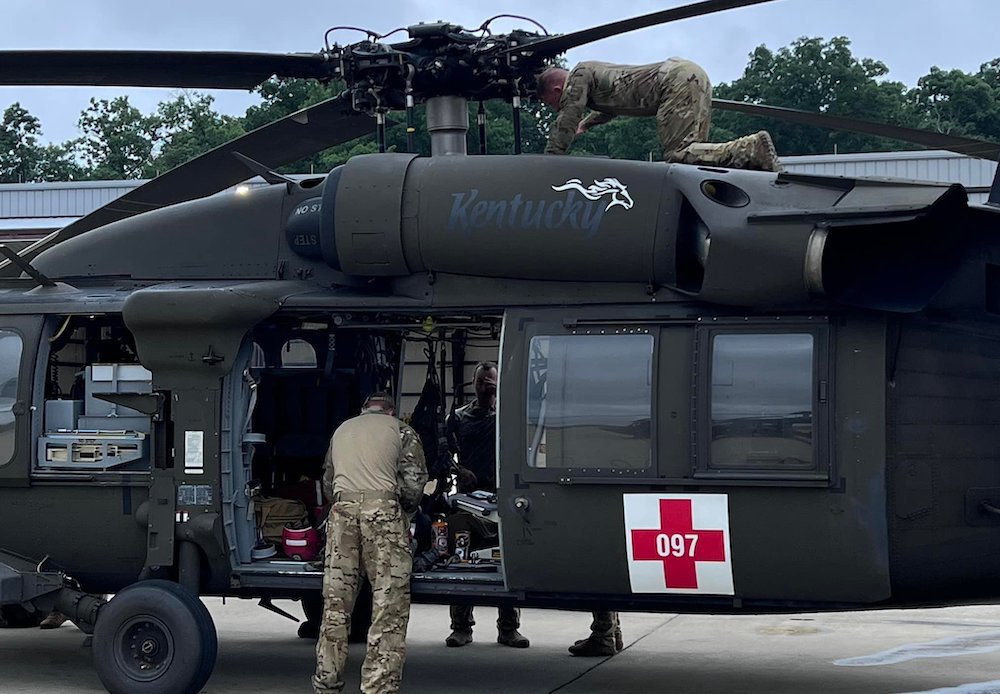 Kentucky Gov. Andy Beshear said Thursday that the severe flooding in Eastern Kentucky is expected to lead to multiple deaths and hundreds of families losing their homes.

In a 9:30 a.m. press briefing on Thursday morning, Beshear said he has declared a state of emergency and activated the National Guard, which has three active search helicopters and around 15-20 “high-axle vehicles” that can travel through flood waters.

“It has been a tough night and may be even a tougher morning for so many of our residents,” Beshear said. “We are currently experiencing one of the worst, most devastating flooding events in Kentucky’s history.”

Drone shots of the #Flooding in #Kentucky after it the water has receded several feet. #KyWx pic.twitter.com/UPgp6XRzx4

The governor called the situation “dynamic and ongoing” and said that officials expect “massive property damage” and “double digit” deaths. Beshear also said that there are “a lot of people on roofs in Eastern Kentucky waiting to be rescued.” At a 12:30 p.m. update, the governor said an 81-year-old woman in Perry County has died, and that two other deaths have been reported. On Friday morning, the governor told CNN that at least 15 people had died, including children, and that number is expected to double.

“This is going to be another event that it’s going to take not months, but likely years for families to rebuild and recover,” Beshear said.

The governor added that as of Thursday afternoon, more than 25,000 households were currently without power.

At 10:48 a.m. on Thursday morning, the National Weather Service said flood watches would remain in effect for much of Eastern and south-central Kentucky through Friday night.

More showers and thunderstorms are forecast at times through Friday, with a continued threat of flash flooding. #kywx pic.twitter.com/Q0pIFykI9R

The NWS warned: “Excessive runoff may result in flooding of rivers, creeks, streams, and other low-lying and flood-prone locations. Creeks and streams may rise out of their banks. Flooding may occur in poor drainage and urban areas.”

At the governor’s press briefing, Maj. Gen. Hal Lamberton of the Kentucky National Guard said, “We’ve been prepared to respond for quite a few hours at this junction.”

For those wanting to donate to relief efforts, Beshear said that the people who have been impacted are going to primarily need water and cleaning supplies. A Team Kentucky flood relief fund website for donations is also currently live.