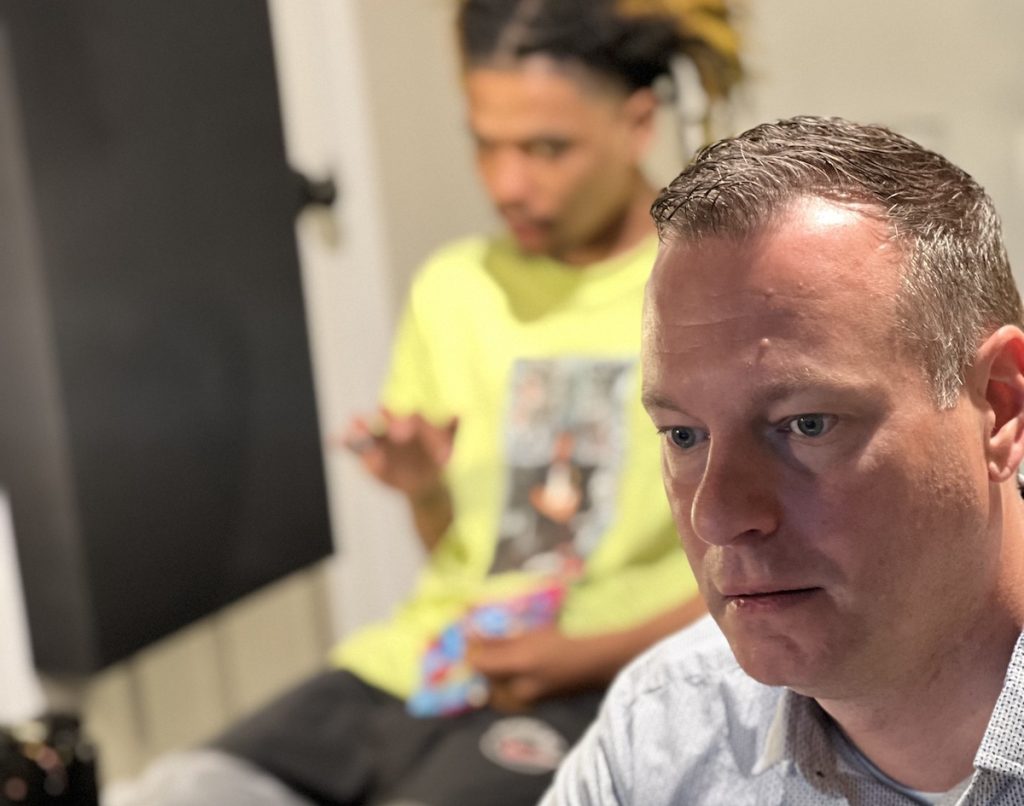 Even without a substantial support team, artists can navigate Dolby Atmos, and it’s getting easier.

This piece is a companion story to our previous story: Could Immersive Audio Make Louisville A Major Music City?

Singers, rappers, and musicians – the ones who are true artists – care deeply about the sounds they produce both live and in the recording studio. That’s why when Apple Music gave us their new Spatial Audio category, which is how they label immersive audio, they emphasized the artist’s perspective.

It has largely been well-funded artists who have adopted Atmos mixing, with industry strategists helping guide the way, and the results are phenomenal, in the truest sense of the word.

“With Atmos, you’re going to notice more granular or molecular-level detail that you wouldn’t get out of the stereo mix. The word that comes to my mind is that the listening experience is more expansive without being gimmicky,” said Jeff Dickerhoof, a Louisville-based mastering engineer.

Music delivered in an Atmos environment – which includes a growing range of options from certain models of several brands of earbuds (Apple, Beats, and Sony) to some soundbars and wireless speaker systems to proper 7.1.4 speaker set-ups – is transformative for the listener. Artists are in a position to shape that listening experience, along with their mastering engineers, and doing so requires an upgrade in thinking as well as execution.

In Dickerhoof’s view, music in every genre, whether the music is sparse or robust, can be illuminated by an Atmos mix. “I’ve been listening to a lot of jazz arrangements, and they’re very, very sparse. So versus having 12 different parts going on with, you know, five guitars and three synths and all these things, even the most simple mixes can be adapted, in my mind, to immersive audio and they could have an enormous impact.”

These notions are at once exciting and intimidating, as the vast majority of music artists are not plugged into the industry pipeline and don’t know where to start with immersive audio.

What is the Atmos journey for unsigned artists, or those without the industry support that Justin Beiber, Shakira, and Halsey enjoy? Where should one begin?

Dickerhoof advises: “The music creation process, in my opinion, needs to remain as natural and limitless as possible. If an artist gets caught up in the details, it could hinder their creative process and ruin a perfectly good song. If they force a production mindset from the very beginning, it might take away from making the best song possible. If an artist really wants to dive in and say, no, I want a production mindset, my recommendation is to first put in your Airpods and listen to as much multi-genre Atmos music as you possibly can, and take notes on what you like about what you hear.” In other words, study the format and get comfortable.

To get a sense of how your music sounds in an immersive setting, Dickerhoof recommends having a previously-released song mixed for Atmos. Not only will you get a sense of the translation, but you might also win over some new listeners by re-releasing the song with an Atmos mix. Chart-topping performers have remixed and rereleased entire albums and found their old music gained new listeners, in some cases 20% or more new listeners. Atmos-mixed songs are viable for Spatial Audio playlists on Apple Music and are more likely to land on Music 1 radio.

Use beats that are tracked out

“If a beat is pre-baked, meaning it’s all-in-one and the parts or instruments can’t be separated, it can only be put into Atmos in stereo, so you won’t get the immersive effect you’re looking for. Your kicks, 808s, synths, claps, and snares should be separate tracks,” explained Dickerhoof.

In the world of hip-hop, many rappers, especially when they are first starting out, download beats from YouTube or buy pre-baked beats online. Sadly, there are producers who sell low-cost beats without track-outs, and there’s a market for them. They are useless in an immersive audio environment.

Private Garden members The Homies never used such beats, and so they won’t have to change their process to produce music with the DNA to yield desirable sound in the immersive environment. The Homies have not yet released Atmos-mixed music, but they plan to.

“We took on a professional approach with our mixing since day one, so when it comes to Atmos there’s isn’t much we’ll have to change besides summing up the music tracks with the vocal tracks, leads, background, and harmonies,” said Ace Pro. “This is a rapidly-emerging technology. I’ve learned its capabilities and started to think creatively about where I can take it. For The Homies, everything we do going forward is what makes us. With us going into a new era with this technology, there’s going to be a distinction between what we did then and what we do now. So we’re being proactive; we’re not going to be playing catch-up.”

For those artists who double as engineers, the path forward is tough but getting easier. New Albany, Indiana, artist and engineer Pharøs took on the challenge of navigating the world of Atmos and is now publishing his music mixed for immersive audio.

Consuming video tutorials and digging up information anywhere it could be found, he set out on a journey that proved arduous but satisfying.

“I had to view up to 20 different videos and then grab like five minutes from each of them to get even one step, you know what I’m saying? The information wasn’t chronological. And then you find out that some of the music distribution platforms don’t even take those kinds of files,” he said.

All that effort resulted in the release of his latest single, Fate, streaming on Apple Music and Tidal and tagged with an undeniable, certified Atmos logo. But it isn’t the logo that matters to him so much as the listening experience.

“So ultimately what I’m doing and what my purpose is, is that I want to put the listener in a transcendent state of mind. When I listen to the mix, it puts me in space. Literally, it puts me in outer space. This is the thing that’s gonna keep me involved in music and not focus on anything else,” explained Pharøs. “There is a very, very big difference between mixing in stereo and mixing in spatial audio. Since this isn’t the typical path people take there weren’t many people to talk to about it when I was learning. There were just people saying they were considering learning it. But now that I’ve learned how to do it, I’m working on perfecting it. This is what I’ve always wanted my music to sound like.”

Accessibility is being supported by Dolby, who released the Dolby Institute Tutorial Series and a Content Creation Quick Start guide – and has made several updates to the renderer. Studio designer Greg Geddes, who has tracked the emergence of Atmos since it came up through the film industry, said, “… about a year ago, the Dolby folks made it possible to mix in Dolby Atmos with Pro Tools using a laptop. Within months, Atmos updated the renderer to make it compatible with most digital audio workstations. It’s all so much more accessible now.”

Find an Atmos-enabled studio to record in

If you’re not an engineer, you’re going to want a team around you who knows what needs to happen to yield music that will actually benefit from an Atmos mix.

Why would you want an Atmos-enabled environment to record music if the mixing happens in post-production? Louisville studio owner, artist and engineer YGB Jay explained: “Monitoring in an Atmos environment during recording is going to be helpful for the engineer, who will manipulate the music with the intent of utilizing the Atmos channels. The artist also needs to be able to listen to all the working parts immersively, to know what sound they want to get. The artist has a voice in deciding where the tracks will reside but to make those decisions, the music has to be heard with all possibilities in play.”

The studio should have a 7.1.4 speaker system. It should also have a license for the Dolby Atmos renderer and engineers with expertise in Atmos. Check ahead to find out the studio’s Atmos-mixing prices. The going rate is $350 per track and depending on how many tracks you have in your song, that can tally up quickly.

There are some mastering engineers with pricing that’s easier to swallow, though not in Louisville. Matt Davis of Hacienda Mastering in Orlando, Florida, believes that unless Atmos is adopted by independent artists, it will fade. So he’s “sneaking them into the party,” as he said, for approximately $500 per song.

Getting it out there

Digital music distribution services are not all created equal. AvidPlay, CD Baby, Vydia, Distrokid, and Landr allow Atmos uploads, which are .wav or .mxf files. At the time of this writing, TuneCore, ReverbNation, AWAL, UnitedMasters and, and Record Union did not. Soon, they all will, because this Atmos tidal wave is coming and there’s no turning back.

In the fall of 2021, the first Atmos-enabled venue, Dolby Live, appeared in Las Vegas, a signal of the rapid spread of this technology throughout the entertainment industry. Here’s how they self-describe on their website:

The breathtaking Dolby Atmos sound system is custom-designed and built into the venue’s thoughtful design, delivering a transformative music experience you can’t get anywhere else. Every event that is performed and mixed in Dolby Atmos, from concerts and sports to awards shows and conventions.

It’s true. You can’t have a live immersive audio experience anywhere else in the United States. That won’t be the case for long. We don’t know which venue will be first here in Louisville, but a year from now, we should all expect to see Atmos-enabled venues pop up in cities billing themselves as entertainment hubs. The live sound engineers who rapidly educate themselves will have exciting jobs. The DJs and artists who embrace Atmos will be the first ones on stage.