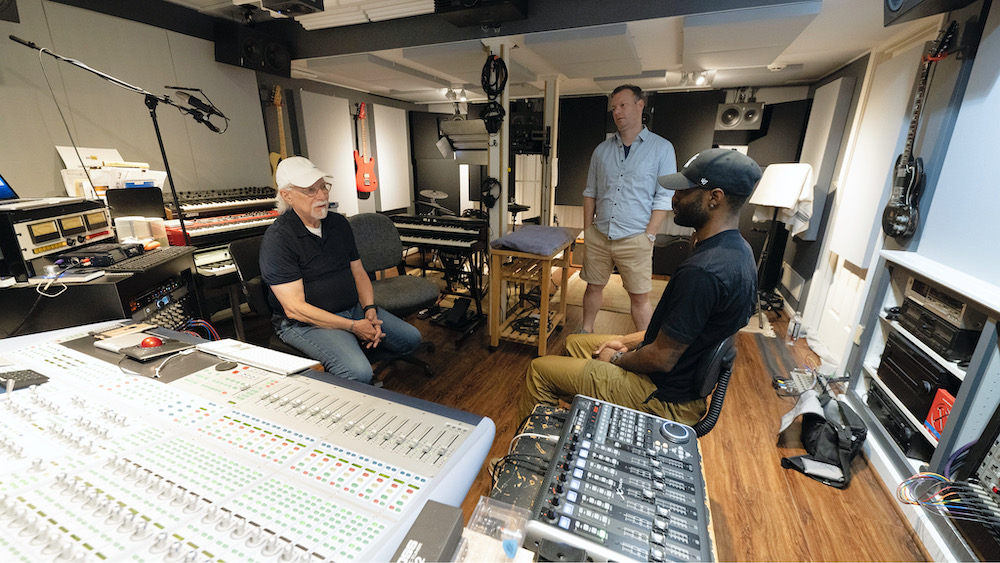 The most beautiful things happen when creativity and technology embrace one another like the lovers they were meant to be. But here in Louisville, where musical artistry knows no limits, there’s a dearth of recording studios offering the kind of production and engineering that will yield recordings poised to satisfy newly-educated listeners worldwide.

As if struck by Cupid’s arrow, music lovers are falling for immersive audio, thanks to the streaming platforms and listening devices that deliver in this arena. Join the fans who popped in their AirPod Pros and listened to “Gotta Move On” by Bryson Tiller and Diddy, Vory’s album Lost Souls, or EST Gee’s album Last Ones Left, via Apple Music or Tidal. The songs were mixed for Dolby Atmos, a magically wonderful technology exported from the movie industry. You will walk away from your personal listening session knowing something different happened, craving more of these captivating sounds, even if you cannot identify the root cause.

What is immersive audio?

So let’s get down to it and explore what immersive audio actually is. No matter how many tracks a song originally has, a stereo mix boils them all down to two tracks, left and right. Meanwhile, an Atmos mix supports 128 channels, and each track is located and manipulated individually by the mixer.

The mastering engineer has a leadership role in that they need to know the ins and outs of the technology and possess the expertise and creativity to use that technology. But they are not working alone. An artist listening to their own music in an Atmos-enabled environment, a 7.1.4 surround sound environment, can give feedback to the mastering engineer, specifying their preferences for which qualities are emphasized and where the tracks are located. “Let’s try putting the hi-hat over here, and the kicks back there,” they might say. In the end, a listener gets to experience the music the way the artist intended, immersed in three-dimensional sound.

A well-done Atmos mix has textures, layers and volume dynamics that are less notable in stereo versions.

Where did immersive audio come from?

A year ago on May 17, Apple Music announced that big changes were afoot, stating, “Apple Music is bringing industry-leading sound quality to subscribers with the addition of Spatial Audio with support for Dolby Atmos. Spatial Audio gives artists the opportunity to create immersive audio experiences for their fans with true multidimensional sound and clarity. Apple Music subscribers will also be able to listen to more than 75 million songs in lossless audio — the way the artists created them in the studio. These new features will be available for Apple Music subscribers starting next month at no additional cost.”

Very few people probably understood what all that meant. Did this word salad promise something substantive for the general populace?

While Spotify dominated the marketplace, grabbing 32% of streaming listeners globally, Apple Music promised to be a conduit for better listening experiences, and they weren’t lying. Their leadership in this audio category, a quality-driven audio space that is shared with Tidal, Amazon Music and Qobuz, syncs up with the proliferation of new listening products designed for spatial audio. New-to-market speakers, soundbars, receivers, and even models of several brands of earbuds (Apple, Beats, and Sony) support immersive listening.

You might have heard — or you may be — a naysayer dismissing immersive audio as a fad. But we can expect pushback when the tides of change roll in. The thing is, immersive audio has been with us for a long time, utilized in movie theaters, where the audience is not confined to a stereo experience. In a movie theater, the sound comes from all around you. That’s Atmos.

Louisville-based studio designer Greg Geddes has tracked the emergence of spatial audio since its origins. A musician signed to Phillips Records at age 19, he put out albums with his band Hello People and toured with Todd Rundgren, who audaciously skipped his Rock & Roll Hall of Fame induction last year (“The fans have practically no power to influence who gets into the Hall.”). In 1980, he went to work for ​​Modern VideoFilm in Los Angeles, transferring film to videotape. From there Geddes moved to Chase Productions where he did archival restorations, including remixing “Gone With The Wind” using early Dolby technology.

Building his reputation on his musical artistry and decades of stellar work at California post-production houses, today he designs Atmos studios and his current project is overseeing the build-out of two Atmos rooms he designed for Wildtracks in Burbank, CA. Wildtracks is a full-service post-production audio facility in Hollywood specializing in television, theatrical marketing, and commercials. The company is responsible for audio on “Breaking Bad,” “Ozark,” and “The Good Wife.”

“The Dolby Atmos Production Suite renderer being made available for music had a lot to do with record companies being able to hire out,” Geddes said. “Two years ago, studios in Nashville and Los Angeles were suddenly flooded with catalogs to put into Atmos. … The original Atmos renderers were designed for motion pictures for a three man mix on a dub stage. They were expensive. … Then, about a year ago, the Dolby folks made it possible to mix in Dolby Atmos with Pro Tools Ultimate with panners specifically made for music.”

So how does this all tie into Louisville’s music scene? Right now, there are at least four Louisville artists consistently producing new music mixed for immersive audio: EST Gee, Bryson Tiller, Vory, and Jack Harlow. Thanks to a stiff hierarchy that controls information flow in the entertainment world, commercially successful artists like these are tuned into trends and industry shifts, and so they know Atmos mixes are not optional. But what are Louisville artists to do if they want to match the big stars on sound quality?

The trick is to find an Atmos-enabled studio where you can book time.

Geddes explained what an Atmos-enabled environment is when describing his home studio:

“It’s an Atmos studio because I have the software license for the Dolby Atmos renderer, and I use Pro Tools Ultimate with that,” Geddes said. “And mainly because I have a whole lot of speakers. It’s a 7.1.4 Atmos environment with the speakers in their logical places, but most importantly, I get to use all my learned skills from working in multi-format surround post-production and apply it to my first love — music.”

Finding such a place locally is going to be a challenge right now. There aren’t any Louisville studios marketing themselves as Atmos-enabled. One reason could be the financial investment in speaker systems required to optimize for Atmos; another could be doubts about whether there’s a market for immersive audio production here in town.

The fact is, Louisville is behind with regard to audio technology. There is a Nashville cluster of Atmos-enabled studios on Dolby’s list, and another in proximity is Sweetwater Studios in Fort Wayne, Indiana.

DeShawndra Ray, founder of the production company 7 Ray Media and manager of Bblasian and Cam Harris, has seen all aspects of the local music industry, first as an artist himself and more recently as an artist manager. Ray has solid points of comparison to draw from, having invested significant time in Los Angeles, Atlanta, and Nashville, where his clients record.

Ray noted that the lack of availability of Atmos-enabled studios and low numbers of Atmos-savvy artists and engineers is a sign that the local music industry must employ a coordinated strategy if it intends to emerge further: “Arts funding and tax breaks directed at the music scene seem like part of the answer, but it is more complicated than that. If the music sector were to follow the roadmap of the bourbon industry, unify through organization, build a lobby, we would get heard by state and city officials. If we were to effectively communicate the economic benefits of fully building out the music sector, Lousiville would become the music city it was meant to be.”

Deep structural changes won’t happen overnight, and some artists won’t wait for a foundation of support to coalesce. They will take matters into their own hands.

Pharøs, a New Albany, Indiana, artist and engineer, decided to learn how to mix for Atmos on his own. Consuming video tutorials and digging up information anywhere it could be found, he set out on a journey that proved arduous but satisfying.

“I had to view up to 20 different videos and then grab like five minutes from each of them to get even one step, you know what I’m saying? The information wasn’t chronological. And then you find out that some of the music distribution platforms don’t even take those kinds of files,” he said.

All that effort resulted in the release of his latest single, Fate, streaming on Apple Music and Tidal and tagged with an undeniable, certified Atmos logo. But it isn’t the logo that matters to him so much as the listening experience.

“So ultimately what I’m doing and what my purpose is, is that I want to put the listener in a transcendent state of mind. When I listen to the mix, it puts me in space. Literally, it puts me in outer space. This is the thing that’s gonna keep me involved in music and not focus on anything else,” explained Pharøs.

The Homies, part of Jack Harlow’s collective Private Garden, have not yet released Atmos-mixed music, but they plan to. ​​Ace Pro feels well-situated to learn the ropes and anticipates it won’t be long until artists everywhere have access.

“This is a rapidly-emerging technology. I’ve learned its capabilities and started to think creatively about where I can take it. For The Homies, everything we do going forward is what makes us. With us going into a new era with this technology, there’s going to be a distinction between what we did then and what we do now. So we’re being proactive; we’re not going to be playing catch-up,” he said.

Ace and his group-mates are poised for success in the immersive space. The question is whether Louisville as a whole is ready.

In the fall of 2021, the first Atmos-enabled venue, Dolby Live, appeared in Las Vegas, a signal of the rapid spread of this technology throughout the entertainment industry. Here’s how they self-describe on their website:

“The breathtaking Dolby Atmos sound system is custom-designed and built into the venue’s thoughtful design, delivering a transformative music experience you can’t get anywhere else. Every event that is performed and mixed in Dolby Atmos, from concerts and sports to awards shows and conventions.”

It’s true. You can’t have a live immersive audio experience anywhere else in the United States. That won’t be true for long. We don’t know which venue will be first here in Louisville, but a year from now, we should all expect to see Atmos-enabled venues pop up in cities billing themselves as entertainment hubs. The live sound engineers who rapidly educate themselves will have exciting jobs. The DJs and artists who embrace Atmos will be the first ones on stage.