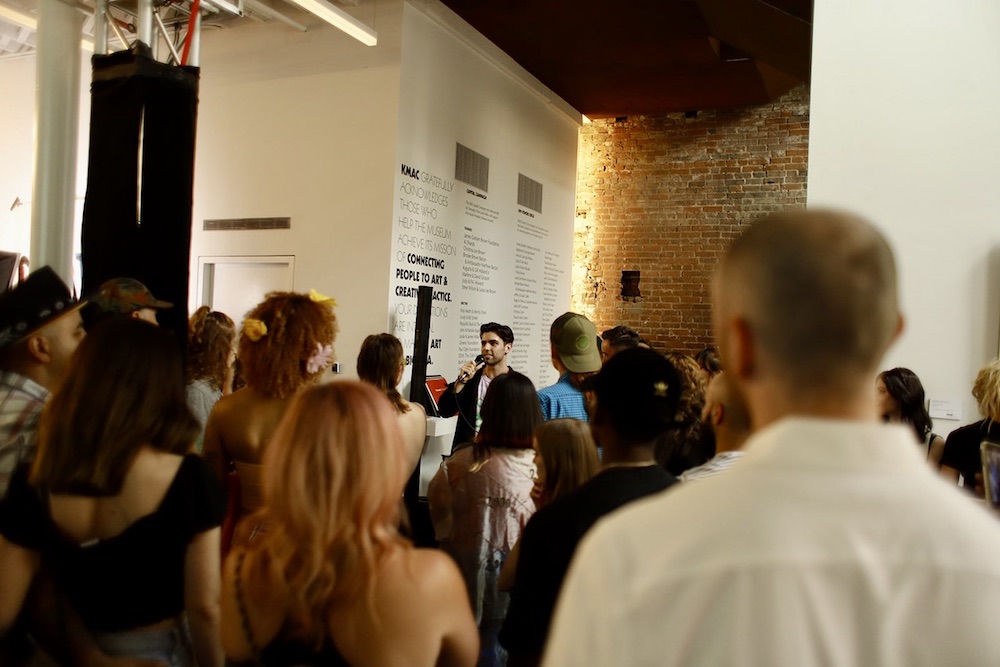 Two years in the making, Louisville Creative Connection (LCC) launched on June 2 with an event at KMAC Museum in downtown Louisville.

“Our mission is to make Louisville an arts city by investing in up-and-coming artists that have true passion for their work, by creating spaces for them to build community, and by fostering innovative collaboration between creatives around the city,” said cofounder Sage Delaney, one of three leaders looking to forge a new path in Louisville.

Delaney, Austin Ozier and Jason Morales are currently building a co-working space specifically designed for creative people, a place where photographers, film writers, music producers, and others can co-exist and work and grow together. Ryan Grant of Creo Studio at 101 N. 7th St. has offered the collective space to flesh out a footprint, as LCC has existed without a home base until now.

“Louisville needs an infrastructure designed to elevate creatives to real job opportunities. I believe this is the only way for Louisville to become a creative city on the national stage. We cannot keep shipping our artists off to Atlanta or New York to succeed. But unless we have a network of creative support here at a high level, artists will continue having to leave the city to see national success,” said Delaney.

Delaney isn’t making this up. He’s been watching artists move away. “Noah Keckler is a friend of mine who moved to Chicago for film school and found success shooting for Lyrical Lemonade and independent music artists. He didn’t come back. Madeline Thompson moved to Los Angeles and shoots photos for some musicians there. Robert Gallardo from Frankfort became a creative director for ASAP Mob. He hasn’t stepped foot in Kentucky for years.”

The launch party at KMAC, billed as A Night for Creatives, brought out almost 400 people. Quincy Nelson, a member of the collective, found the event engaging, open, and even thrilling.

“It was the biggest surprise. I didn’t know so many people in Louisville wanted the same thing. Everyone wanted to make our passions come together and come alive. I saw people of all ages, from middle school to those in their 60s and 70s, from all backgrounds,” he said.

The vibe of the launch aligns with the scope of the organization itself. LCC focuses exclusively on people who have or are looking to develop careers in creative fields. They have plans to engage area high schools in 2023 through their community partnership program, speaking in creative and art classes.

“Another plan is to begin hosting workshops for young creatives, led by older, experienced creatives. We’re currently working with Start Up Week Louisville to build a creative track, where we would bring trusted talent in from around the country to host panels. We’re also working with KMAC to host a weekend-long educational fashion experience and runway show, where we will bring fashion industry creatives in from New York to give workshops and inspire Louisville residents interested in going into fashion as a career. The weekend would end with a runway event showing fashion designed by Louisville designers.”

As the ideas continue to unfold and take shape, it’s apparent to Delaney, Ozier, and Morales that they will ultimately outgrow the space they inhabit at Creo Studio.

“Our current vision for a massive, collective, multi-disciplinary studio is already in motion. We’re in talks with real estate investors and established Louisville organizations about making such a space, and things are going well. We’re already looking at multiple buildings. It will take time and money,” said Delaney. “We just met with Andre Guess of Fund for the Arts. Andre encouraged us in the direction of purchasing a building and turning it into a coffee shop and studio that houses a photography studio, a recording studio, and all these different kinds of art studios. A place where artists and creatives exist in one place. What we have at Creo is a prototype for that.”

If you’re wondering how you can tap into LCC’s current offerings and future plans, the best approach is to go to their website, loucreativeconnection.com, where they post upcoming events, from workshops to brunches to photography walks. LCC has a second Night for Creatives in the works, to be held in early August at Worthless Gallery at 1301 W. Main St. Also, follow LCC on Instagram at @loucreativeconnect for highlights of their recent activities and profiles of their members and leadership. To schedule a walk-through of the 7th street studio space, which is in the Normandy Business Center, direct message @ryangrantphoto.