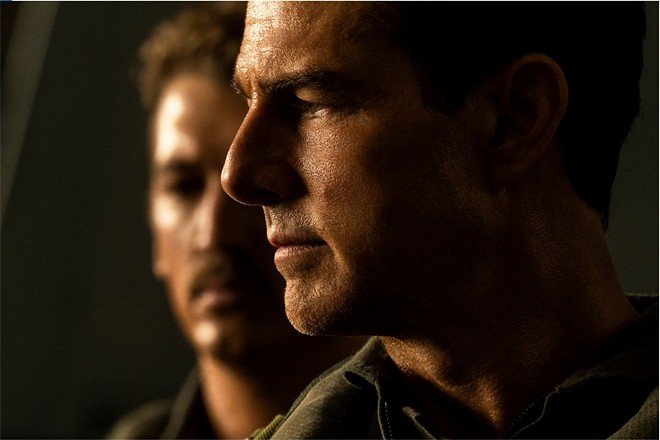 (L-R) Rooster (Miles Teller) has lived in the shadow of Maverick (Tom Cruise) for his entire life; thankfully, a nuclear threat will force them to not talk about their feelings while they fly to their possible doom. Also, summer blockbuster, yay! | Photo via Paramount Pictures, Skydance and Jerry Bruckheimer Films.

“Top Gun: Maverick” is the timeless story of a renegade, a man’s man for whom no rules apply, a champion who can never be bested, or disciplined, even when he’s taking a proverbial and a literal poop on his own government.

That’s right, I said it.

U.S. Navy Capt. Pete ‘Maverick’ Mitchell’s story is exactly the kind of propogandist bullshit that failing democracies love to promote, if only because “Top Gun: Maverick” is poised to rally a false sense of patriotism and unify the masses even as it starts printing its own currency hand-over-fist when it rules the national multiplex.

It has been 36 years since we first met Pete (Tom Cruise), who is equally comfortable bucking authority as he is flying inverted over a Russian MiG, and while the rest of us have grown older, rounder and more jaded, aghast and dismayed at the terrible downturn in civility, political discourse and global security, Maverick Mitchell still looks and acts basically the same.

As he says 4,000 times in “Top Gun: Maverick,” he can’t help his look because it’s his only look and that’s the look he’s looking at us with even as Jerry Bruckheimer picks our pockets and empties our wallets for a sequel that is equal parts nostalgia and inspirational slogans that basically mean nothing.

I don’t blame Cruise. I have remained a fan of his work for damn near 40 years. And I was pumped—PUMPED—to see him return to the cockpit, buzz the tower and smile that megawatt perfect smile.

And then I watched the movie.

“Top Gun: Maverick” opens with the same iconic Harold Faltermeyer theme, which quickly transforms into a burst of “Danger Zone,” all the while fighter jets take off and land from an aircraft carrier out in the ocean.

Don’t ask why. There is no why. There is only Pete, alone in a huge hangar, torquing something. He checks the clock, he checks his wall of photos from 1986 of him and Anthony Edwards and Meg Ryan (do actors get royalty checks if their image appears in a sequel?), he digs deep (not really) into a locker and pulls out his 36-year-old leather jacket, which looks as sparkling fresh as Pete, yanks the cover off of his motorcycle and zooms to a military base.

We know Maverick is still a big deal because he’s allowed to roar past the entry guard gate without slowing down or getting shot.

And then he proceeds to steal the first of THREE multi-million-dollar military fighter jets that he, ahem, borrows throughout the course of “Top Gun: Maverick,” only to give a middle finger to Ed Harris for confusing him so much with his character in “Westworld” and also to immediately become the first, or one of only a few, pilots ever to break Mach 10.

I’m not sure on the latter because the movie doesn’t care. The entire opening 20 minutes or so exists solely to re-establish that Pete “Maverick” Mitchell is still a rule-breaking bad-ass who flies real good and real fast and who doesn’t go to jail or get court-martialed for doing crazy shit.

As a consequence of defying direct orders, Pete gets his bacon plucked from the fire by his old pal Iceman (Val Kilmer), who is now a really big deal and apparently has the military clout to send his arch-rival back to Top Gun to train a ragtag bunch of the best of the best fighter pilots, which just so happens to include the lone child of Pete’s dead wingman Goose, who goes by the callsign Rooster.

It’s purely coincidental that Rooster (Miles Teller) looks exactly like his dad did almost 40 years ago, right down to the creepy mustache and ability to play Jerry Lee Lewis on the piano. Oh, and he hates Maverick, but not because Pete caused his father to die, which is odd.

The new batch of Top Gun graduates that Maverick has to train to be prepared to die (literally, their mission, which they don’t get to choose to accept, is a suicide mission) includes a melting pot of genders and ethnicities and Bill Pullman’s kid, which is about as close as a movie like this gets to making a statement on inclusivity.

Apparently, the military also is at a loss for iconic images to display as every other framed photo at Top Gun is a picture from the end of “Top Gun,” which seems odd given that the end of the first film happened on an aircraft carrier at sea and I don’t remember the staff military photographer being onboard that mission.

Also, this just in: Jon Hamm is no Tom Skerritt, no matter how constipated he looks when he grimaces at Pete and tells him, over and over, how his Maverick bullshit WILL NOT be tolerated, even as he consistently tolerates it and doesn’t lock Pete up for disobeying orders and stealing multi-million-dollar military aircraft, over and over again.

You know “Top Gun: Maverick” is basically being cribbed from state-run media because the existential threat that warrants handing over responsibility for a Defcon-4 suicide mission to the equivalent of a war criminal involves the urgent need to destroy an underground uranium enrichment facility in a nameless country.

The heart of “Top Gun: Maverick” is actually the story of a surrogate absentee father (Maverick) who showed tough love to a kid (Rooster) whose parent he killed (Goose) who just can’t figure out how to break his hard external military shell (thankfully, he can still break military rules) and just have a human conversation.

This internal conflict results in many characters speaking to Pete in empty, innocuous poster-talk.

Iceman texts him that Rooster needs Maverick the same way the military needs Maverick, which I’m not sure what that means, and likely Maverick doesn’t either.

Maverick’s age-appropriate love interest Penny (Jennifer Connelly), who we know is a strong, capable woman because she owns a bar, a vintage Porsche and her own sailboat, listens as Maverick almost emotions when telling her that he fears he’s going to get Rooster killed, and then she wisely, succinctly tells him that he’ll figure it out.

By this point, thankfully, the script just says DOGFIGHT PEW PEW and “Top Gun: Maverick” switches to full-throttle video game mode for its final half hour, which is actually the best part of the movie, and includes the only genuine moment of real anything, which makes you wonder why no one else realized that the entire sequel should have been a bickering buddy comedy about surrogate parents and their ungrateful surrogate children trapped behind enemy lines in a nameless rogue nation trying to go nuclear.

In summation, “Top Gun: Maverick” is the story of a serial rule-breaker, heartbreaker and military aircraft thief who defies every order he’s given because his way is the only way, and we love him for it, even if we would all be immediately shot on sight for acting in a similar fashion.