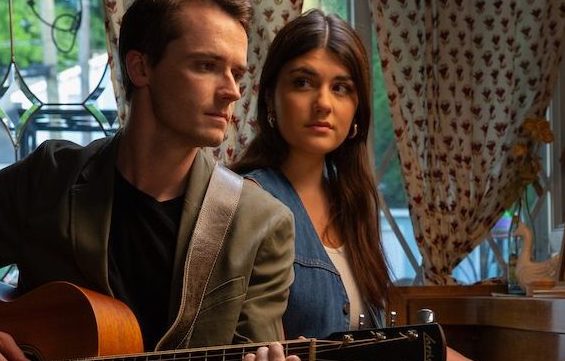 Time Slip Theatre has a new home and a new show, its final of the season. The new show, which opens June 24, is a stage production of the award-winning film, “Once,” made famous by its flagship song, “Falling Slowly.” The film stars singers Glen Hansard and Markéta Iglová.

LEO got a chance to catch up with Remy Sisk, who is directing the play at Time Slip.

LEO: Talk about the new venue.
Remy Sisk: Time Slip Theatre is located at 1501 Story Avenue in the space formerly occupied by LetterSong Calligraphy Studio. Over the last several months, we have converted the space to an intimate black box theatre with versatile configurations and seating up to 55. Louisville has a major performing arts venue problem, and Time Slip is proud to now be able to offer this space not only as its own headquarters but also as an option for other companies who may want to produce shows at this venue.

What will the new venue allow for Time Slip Theatre?
Having our own black box allows us to be a bit more ambitious with frequency of programming. With other options so limited, it can be difficult to plan a full season when you don’t know where you even have available to do it. But this space allows us security of knowing we have this black box available. It also allows us to build bridges with other theatre companies who may want to use the theatre for their own shows. Furthermore, it gives us a home for our after-school and summer programming for kids. We just wrapped the spring semester, and having a space for those kids to rehearse and then perform in is huge for that side of the company.

The new show is ‘Once.’ What inspired you to do this play?
What strikes me most about ‘Once’ is how it blends music-making and storytelling. I felt like producing a show that brings those two elements so inextricably together would be very special and a nice complement to our darker shows of the season (‘Murder Ballad’ and ‘Cruel Intentions’). Additionally, the story is just captivatingly beautiful. It’s impactful in its subtlety and cathartic in its nuance — the relationships are at once both subdued and staggeringly human. The script, to me, is a masterclass in emotional peaks and valleys; as soon as you start to cry and feel the heaviness, it lightens up and lets you laugh. It’s a really beautiful emotional ride for the audience and I’m so excited to share it. Another added element to this show is that actors are expected to play instruments, so it’s been fun seeing musical theatre actors pick up new skills while also seeing some talented musicians learn some musical theatre ability. Again, that blend of music and story really permeates this entire production in a way unlike I’ve ever seen before.

The chemistry of the main characters is very important. How do your lead actors fulfill this?
Tyler Akin and Kylie McGuffey are giving two of the most defined performances I have ever seen in Louisville. The way these two actors have so completely navigated the emotional weight between these two characters is truly astonishing; as the relationship between the Guy and Girl — yes, those are the characters’ names! — shifts, Tyler and Kylie have been able to take those beats and tun in what is to me a very human, very real, very genuine connection. It’s exceedingly rewarding as a director for me to see the two of them flourish so completely in these roles, accentuating the dynamics of their spoken scenes with songs that are just teeming with feeling. There are two scenes in Act II where the two of them simply take your breath away with the way they have defined this connection between these two people and I cannot wait for audiences to experience it.

Why did you think now would be a good time for this performance?
At its core, ‘Once’ is a story about rebirth. It’s a story about resurgence, about renewal and ultimately about rediscovering hope. I think that is what this world needs right now. It acknowledges and validates feelings of heaviness, loneliness, emptiness but then illustrates how possibility always remains. I think that deep catharsis — of seeing someone having given up on themself and then watching as they are able to rediscover who they are — will be hugely impactful to audience members. The journey of these characters is immensely relatable and indeed often emotional, but ‘Once’ doesn’t try to make you sad; it’s a joyous celebration of renewal, of creation and of hope, and I think people are going to leave this show really having felt something important.

What other plays are coming up this season (or next?)
‘Once’ is the final show of Time Slip’s inaugural season! We’ll be announcing Season 2 on opening night of ‘Once,’ so stay tuned! We’ve got some straight shows and some musicals and, of course, ‘The Rocky Horror Show’ in October and April.

Time Slip Theatre will perform “Once” from June 24 to July 3. Tickets are $24. For more info, visit timesliptheatre.org. •