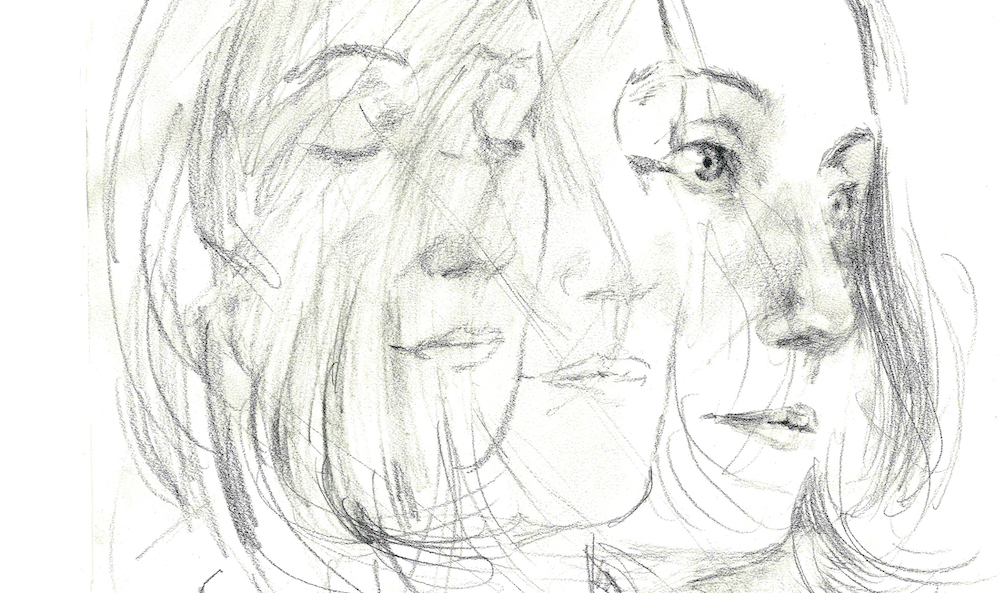 A portrait of Joan Shelley.

I had no idea we were making a life raft when we formed a small songwriting group in early March 2020. We met once in person and then the meetings went to screens, writing a song per week based on prompts we came up with together. We started the group not knowing the essential part it would play supporting our mental health during all that would happen in that first year. We processed the grief and isolation and political despair. We found something to make from the shattering pieces. Where lockdown took the wind from our sails, there seemed to be magic in asking something of each other.

I had to leave the group when my morning sickness made it impossible to Zoom. I had a child; my first. I didn’t know that I would be a mother in this life. After the soft opening of the world, our group dissolved, everyone returning to their various circles and realms. I soaked up the smells and sounds of my newborn, completely immersed in the raw nerves, hers and mine.

Then the Intergovernmental Panel on Climate Change report came in saying it was almost too late. This was a crisis we could foresee, but if we got to the “wall” there would be no chance to give our children the world as we knew it: the pollinators, the butterflies, the migrating birds, the seasons. It seemed that we were a disaster-driven society, programmed to keep going with the status quo until we hit that wall. But if we let the disaster teach us, there would be no chance to learn this lesson, to adapt.

It was keeping me up at night during an already sleepless time with a newborn. I kept wondering how to cope with this immense stress that made action seem impossible — the kind of action that might keep us from running off the cliff.

I still worry for my daughter, that I have brought her to a corrupted place. I was haunted by a quote by Norwegian philosopher Peter Wessel Zapffe: “To bear children into this world is like carrying wood to a burning house.” I want all my actions to show her the beauty here, all my actions to be water on the burning house of the world. She is so full of joy and wonder, beaming her smile at everyone she meets, not knowing that the people she beams at are running her off the cliff.

Then I noticed that all of the like-minded people I knew couldn’t even bear to hear the news anymore. “I’m taking a break,” they said. While I deeply empathized, I was chilled at the realization: If all the sensitive people out there were doing the same thing… then who was steering the ship? What if all the kind people I knew were stuck in their grief and anger, paralyzed like me?

So I thought: What if we could harness that special power that we found in the songwriting group? The asking. Something to help some of the soft-hearted people grieve and to vent anger; to turn that energy into something positive, something tangible? It didn’t have to be big; just an intimate group that would ask each other to show up together. To create things that would unfreeze and unparalyze. To make something beautiful, because it would matter to us that we tried.

The idea for an intimate circle has since blossomed into something bigger and far more extroverted than I could have expected: a parade with puppets, music, and a lot to say… publicly. Honestly I don’t feel ready; my hands already full with my 1-year-old and her needs. I am hesitant to lay my hopes bare in a city where cynicism runs deep. A place where people have scoffed at the idea of a clean Ohio River. Impossible! Childish to even think of it! The fear that our parade, our expression of hope, would just be swatting the hornet’s nest — making people who don’t already agree with us more resentful and unwilling to help stop the exploitative actions that have been poisoning our soil, water, air, and community. Taking profit as the measure of what is “good,” what is “progress.”

I still want that intimate group to process all that is painful and frustrating. But, on this occasion, I feel asked once again to open outward instead, to put energy towards a beautiful vision of what this city could be: healthy, just, and beautiful — something greater than “bourbonism” and fossil fuel-based industry and infrastructure, something beyond polluting ourselves and our place for profit. My hope is that this parade will help strengthen that vision and unfreeze a few more of us. Because this is the only thing worth working for.

I look at my beaming daughter, on the verge of walking and overcome with delight as she stands up for the first time in a crowd; her father and I constantly scrambling after her to keep her from falling. I think, “I don’t have spare time for a parade or a protest. None of us do.” But if you expand the scope of your vision just a little, we don’t have time for anything else.

This article originally appeared in the Our Good River zine, available at www.greenstreetsky.org. The Our Good River Climate Parade will take place at 3 p.m. on June 25 at 3pm. It starts at Injustice Square (Jefferson Square Park).

Joan Shelley is a singer-songwriter and activist. Her new album, The Spur, will be released on June 24.