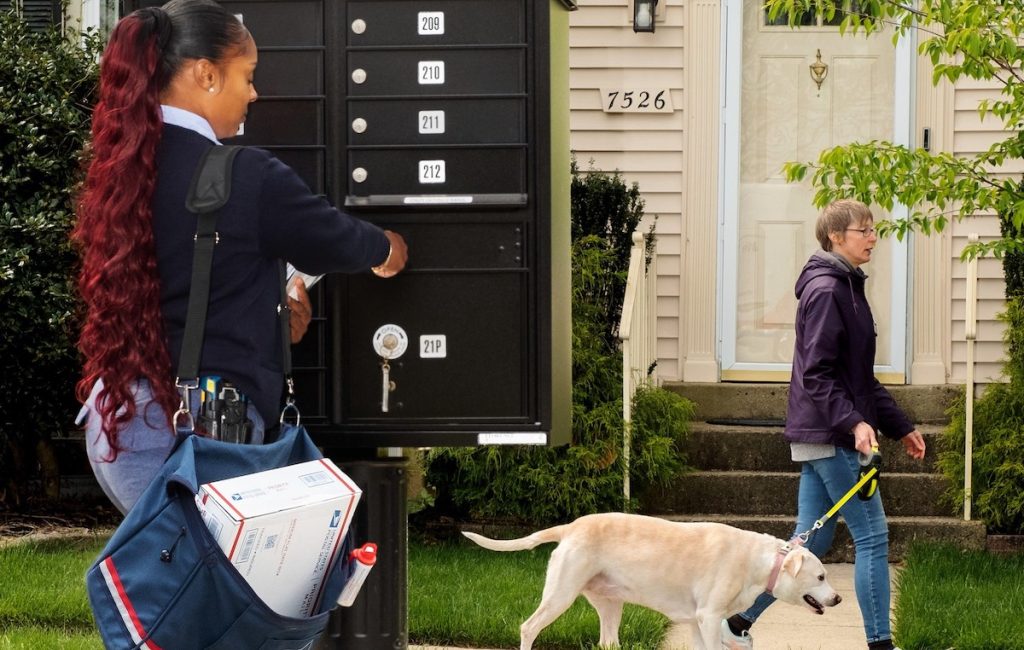 Leash your beast. Courtesy of the United States Postal Service

Apparently, it’s not always fun to be a mail carrier in Louisville. The U.S. Postal Service released its list of 25 cities with the most dog attacks on mail carriers — the River City was ranked fifth.

The report states that in the U.S. in 2021, more than 5,400 postal employees were attacked by dogs. The report lists Louisville with 42 of those. Cleveland had the most with 58, followed by Houston (54), Kansas City (48) and Los Angeles (44). The study was released to raise awareness during National Dog Bite Awareness Week, which is June 5-11. This year’s theme? “The USPS Delivers for America — Deliver for Us by Restraining Your Dog.”

“Every year, thousands of postal employees are attacked by dogs as they deliver America’s mail. And while it’s a dog’s natural instinct to protect their family and home, we ask all customers to act responsibly by taking safety precautions with their dogs while the mail is being delivered,” said USPS Employee Safety and Health Awareness Manager Leeann Theriault in a news release. “When a carrier comes to the residence, keep the dog inside the house and away from the door — or behind a fence on a leash — to avoid an attack.”

If you’re a dog owner, you know how this goes. Your dog may love meeting people on walks or at parks, but when the mail carrier shows up, it’s all snarls and barks. Dogs are primarily territorial in nature and protective of their owners and their owners’ property. Defending its territory sometimes means attacking — and possibly biting — the letter carrier.

The USPS recommends securing dogs before the carrier approaches, meaning keeping them indoors, in a securely fenced yard or at the very least, on a leash. Pet owners also should remind their children not to take mail directly from a letter carrier as the dog may view the carrier as a threat.

I read one theory that dogs’ attack responses only increase with time because the letter carrier keeps returning day after day, prompting the dog to elevate its threat of attack to ward off the perceived “intruder.” With my dog Atticus, it’s come to the point that anytime he sees a mail carrier (or FedEx employee) in uniform anywhere, he growls. We often sit on the porch during the afternoons, during which he is always secured with a leash so that he can’t get off the porch.

In addition, if you want to be in the know of when your mail is coming, a service called Informed Delivery can be useful for dog-owners. It’s a free service that gives customers a digital preview of the mail and packages that are scheduled to be delivered so that they can take precautions and secure their dog when parcels are delivered to the door. Sign up at informeddelivery.usps.com.

Also, the USPS says letter carriers are trained to observe an area where they know dogs may be present. They are taught to be alert for potentially dangerous conditions and to respect a dog’s territory. If a dog attacks, carriers are also trained to stand their ground and protect their body by placing something between them and the dog — such as their mail satchel — and use dog repellent, if necessary.

“I was bit by a dog on my leg recently and my mail satchel helped shield me,” said Francisco Juarez, a letter carrier who delivers in Houston. “The sound of a dog barking while on my route puts me on high alert and I try to be ready to protect myself.”

Finally, the USPS says that when a carrier feels unsafe, mail service could be halted — not only for the dog owner, but for the entire neighborhood. When mail service is stopped, mail must be picked up at the Post Office. Service will not be restored until the dog is properly restrained.