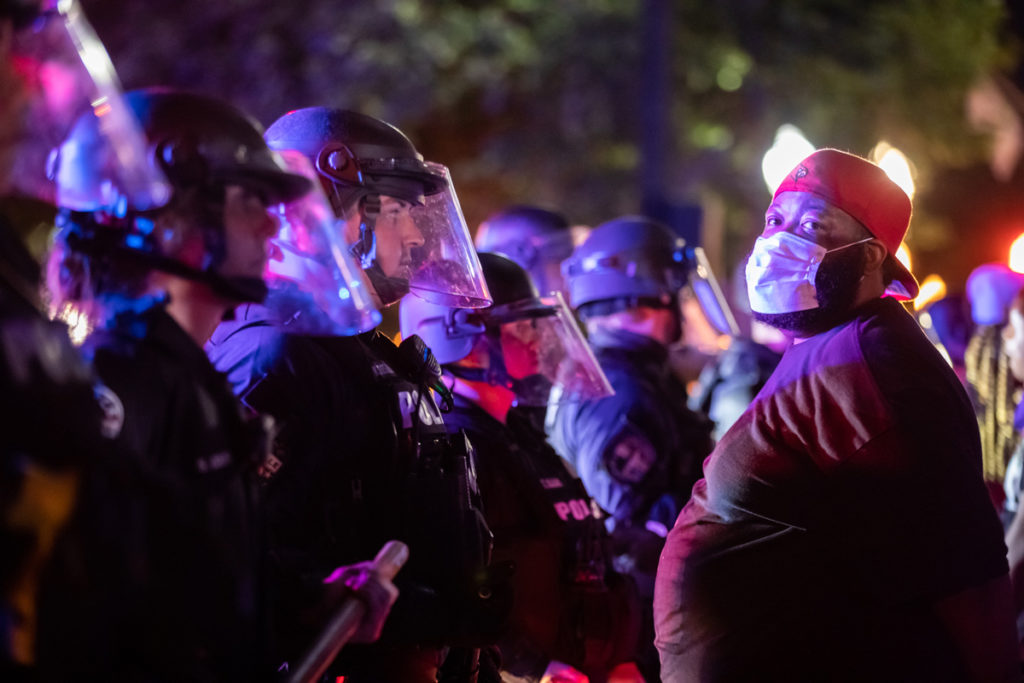 Protesters and police officers faced off with each other during a protest in downtown Louisville in 2020. | Photo by Kathryn Harrington.

A Louisville Metro Police Department emergency response plan that was in use the year the city faced months of demonstrations over the police killing of Breonna Taylor warned officers that violent agitators could recruit wheelchair-bound protesters as human shields and that protesters disguised as police could attack others in crowds to fabricate allegations of police brutality.

Experts in police responses to protests who viewed the 13-page document, which was obtained by LEO under Kentucky’s open records law, said it showed little regard for First Amendment rights by not clearly distinguishing between peaceful protests and more dangerous situations, by failing to acknowledge the heterogenous nature of protest crowds and by making the assumption that civil disturbances will “usually” turn violent.

Such premises represent “discredited mob sociology” that was popular among police departments suppressing dissent in the 1960s, said Paul Passavant, an associate professor at New York’s Hobart and William Smith Colleges and the author of “Policing Protest: The Post-Democratic State and the Figure of Black Insurrection.”

“It seems like the Louisville Metro Police Department is still lost in time,” he added.

Ed Maguire, a professor of criminology at Arizona State University who specializes in police responses to protests, agreed that LMPD’s protest plan was outdated.

“The document demonstrates little knowledge about crowd psychology and the ways that police can inadvertently escalate matters,” Maguire wrote in an email to LEO. “It outlines a purely tactical response with little thought given to larger strategic considerations like how to de-escalate tensions and prevent civil disturbances.”

The plans provide a rare insight into LMPD’s crowd control policy at a time when the department faced widespread allegations of misconduct as its officers used pepper balls, tear gas and mass arrests to clear protests that erupted after the police killings of Breonna Taylor in Louisville and George Floyd in Minneapolis in 2020.

Shameka Parrish-Wright, a leader during the 2020 protests who came in second in Louisville’s Democratic mayoral primary last month, said she became emotional reading the document as she recalled the violence that protesters faced. The document, she felt, explained why some officers acted the way they did during the protests.

“They never saw us as citizens of Louisville, they saw us as enemies. And it’s shameful,” she said.

The opening paragraph of the document describes civil disturbances as more harmful than other types of disasters.

“Civil disturbances are man-made disasters with tremendous potential for causing injury to the citizens of Louisville Metro and damage to their property,” it reads. “Unlike other types of disasters, these events have an especially harmful effect on human lives in that they generally occur in times of already heightened social tensions and are often the direct result of these tensions.”

According to LMPD’s plan, civil disturbances born out of a reaction to an incident “usually” follow the same pattern.

First, an incident that “is perceived negatively by a segment of the community” acts as a catalyst.

Then, the document says, “small but very violent groups of people (which may include gangs) take advantage of a situation and begin engaging in seemingly random acts of violence, such as throwing objects, attacking innocent bystanders, or shooting police or other first responders.”

LMPD’s mission during civil disturbances — a term used interchangeably with protests in the plan — is to “restore order as rapidly and efficiently as possible.”

Experts said the conflation between peaceful protesters and people committing acts of violence is dangerous, making the use of force by police more likely.

“As I read the document, it seems to imply that all protesters are troublemakers or looking to engage in deviant behavior or criminal activity,” said Jennifer Cobbina-Dungy, an associate professor at Michigan State University’s school of criminal justice and the author of the 2019 book “Hands Up Don’t Shoot: Why the Protests in Ferguson and Baltimore Matter, and How They Changed America.” “If the police are viewing all protesters as troublemakers who are out to engage in criminal activity and take advantage of the moment, then what happens is they’re more susceptible towards using more militarized approaches like tear gas and the use of rubber bullets against peaceful protesters, who, it is their constitutional right to protest.”

When the crowd is made up of many Black and Brown people, Cobbina-Dungy said, police suspicion and militarization are already heightened, even further increasing the likelihood that force is used.

Passavant, the Hobart and William Smith Colleges professor, said that the document “constructs or frames every exercise of First Amendment rights as potentially illegal, criminal, potentially violent, to be responded to as a civil disturbance or as a riot.”

Additionally, he said, the document, which did not draw a clear line between constitutionally allowed protest and unlawful assemblies, was “priming officers to be aggressive” and was a “recipe” for First Amendment violations and escalating situations.

The document repeatedly jumped to extreme and seemingly unlikely scenarios officers might encounter during unrest.

At one point, the plan raises the possibility of violent agitators recruiting “non-threatening” protesters including people in wheelchairs, women, children and elderly people as human shields.

“Protesters may recruit groups of ‘non-threatening’ protesters such as women, children, elderly or physically-handicapped in wheelchairs to sit in front of the police defense line providing a safe working zone for others behind them to throw objects at the officers and hinder officers’ attempts to arrest those engaged in criminal activities,” the document reads.

In another section of the document, LMPD warns that protesters may disguise themselves as police to attack others in the crowd.

“Protesters may also impersonate police, assaulting other protesters resulting in false claims of police misconduct or brutality,” the document says.

The document added that accusations of misconduct may be used by protesters to “avoid arrest and to gain the sympathy of the media and bystanders.”

Additionally, the document says that creating the appearance of police misconduct may be the goal of some protests.

While there have been several incidents of people impersonating law enforcement officers at protests across the country in recent years, LEO was unable to identify instances where protesters disguised themselves as police to attack other protesters as described in the LMPD document; If such incidents have occurred, it appears they have occurred rarely. (More documentation exists about the longstanding nationwide practice of undercover police officers infiltrating protest crowds. LMPD’s emergency response plan warned that “activists” could potentially “mark” suspected plainclothes officers with urine, bleach and other substances).

LMPD faced widespread accusations of misconduct over its heavy-handed approach to the 2020 protests, including criticisms that the organization used chemical dispersal agents on peaceful crowds. So far, two LMPD officers have been federally charged for misconduct during the protests while other incidents remain under investigation. The department is also under a wide-reaching Department of Justice investigation that deals in part with LMPD’s response to protests and is widely expected to result in LMPD coming under federal consent decree.

An LMPD spokesperson said nobody was available to speak with LEO about the document. They also declined to answer a question as to whether the emergency response plan had been changed since 2020.

According to LMPD’s publicly-available Standard Operating Procedures, the emergency response plan chapter is meant to provide “more detailed information and instructions for responding to incidents of civil disturbances/disorderly crowds.”

A top-to-bottom review of LMPD by the Chicago firm Hillard Heintze that was commissioned by the city in 2020 recommended that the police force revise its protest response policies and emergency response plans “to provide greater emphasis on the protection of the First Amendment rights to freedom of speech, assembly, and to petition the government.”

According to a dashboard on LMPD’s website tracking the department’s progress in meeting the Hillard Heintze recommendations, the revision of those policies is currently “in process.”

Since 2020, there have been widespread calls for LMPD to reform from activists, the city and police leadership.

In a press release on Tuesday, the 11-member Civilian Review and Accountability Board established last year to provide additional oversight of the police, said that it would be proactively reviewing LMPD policies and procedures “in light of various reports highlighting areas of concern.”

Speaking before Metro Council’s Budget Committee on May 24, LMPD Chief Erika Shields said she wanted to include more civilian specialists in the department to do things like oversee training and audit body-worn camera footage.

“Our lesson plans — they’re outdated. They’ve got stuff in it that I’m embarrassed by. Somebody has to audit these lesson plans and professionalize them. And I will submit to you that it shouldn’t be a cop,” she said.

Parrish-Wright, the activist and protest leader, said reforming LMPD’s protest policy will take a lot of work and a unified stance, and that she fears that if protests were to erupt again today that LMPD would turn to the same playbook it did in 2020.

“The way we were treated — now it all comes together,” she said. “We thought that they already had a better form of crowd control. And this document shows that it is lacking, that they don’t know how to treat humans who are showing up to protest against their injustice.”

To read the LMPD document in its entirety, click here.