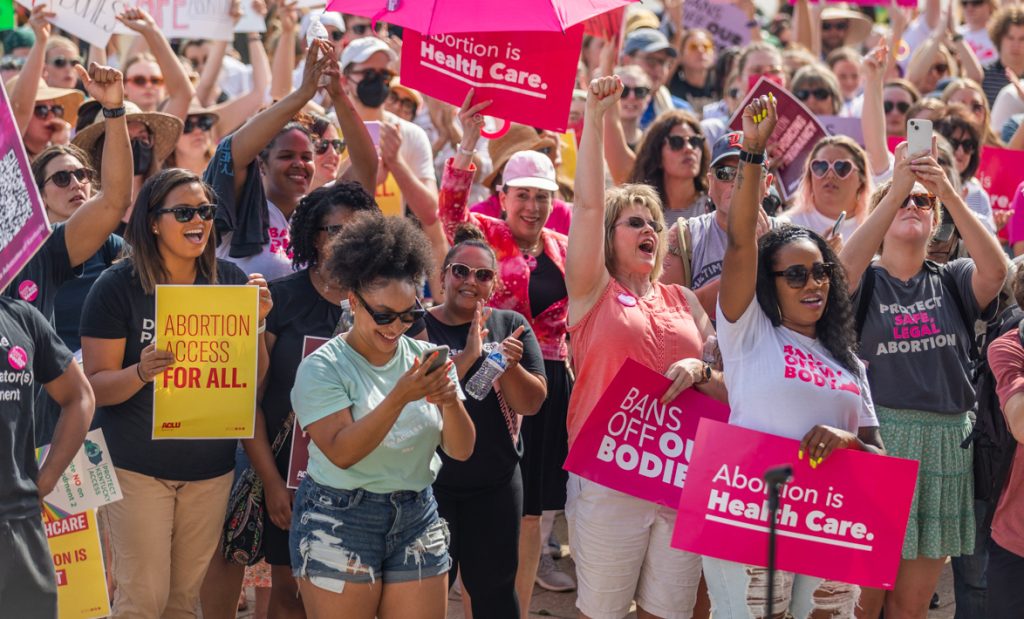 At a press conference on Thursday afternoon, ACLU of Kentucky Interim Executive Director Amber Duke said EMW Women’s Clinic would be able to start offering services again on Friday. Planned Parenthood Alliance Advocates Kentucky state director Tamarra Wieder said she did not believe Planned Parenthood was resuming operations on Friday, but that they were scheduling patients.

The temporary restraining order granted on Thursday means that enforcement of Kentucky’s near-total ban on abortions triggered by the Supreme Court’s overturning of Roe v. Wade cannot go into effect ahead of a July 6 hearing requesting a longer stay on the law. If the ACLU of Kentucky and Planned Parenthood are successful in that hearing next week, abortions will be allowed to continue in Kentucky while their lawsuit against the strict abortion law makes its way through the court system.

“This really is sort of a bridge that has put care back in place for now. We’ll go back to court on Wednesday to argue for a longer term,” said Duke at Thursday’s press conference.

Later, Duke added: “It’s a really important victory for us to be able to get this restraining order. In granting it, the court is saying that they believe our case has a good likelihood of success and that’s why the court is comfortable bringing the order.”

Kentucky’s abortion “trigger law” that went into effect with the overturning of Roe v. Wade on June 24 banned abortion except when a mother’s life was in jeopardy. The law provides no exceptions for cases of rape or incest and carries prison punishments for people who perform abortions or provide pregnancy-terminating medications.

The Supreme Court ruling saw abortion access in Kentucky — already confined to just two clinics in the state, both of which are in Louisville — grind to an immediate halt. On Thursday, Duke said there were 14 patients at EMW Women’s Clinic at the time the ruling came down. Since the ruling, abortion providers and their allies have scrambled to get those seeking procedures rescheduled out of state.

Earlier this year, abortions in Kentucky were also stopped for about a week after the Republican super majority legislature overrode Gov. Andy Beshear’s veto on a bill that abortion providers called a “de facto” ban on abortions. Abortions only resumed after a federal judge granted a temporary restraining order in April.

In another challenge to those who support abortion rights, later this year a ballot question will ask Kentucky voters if they want to add an amendment to the state’s constitution declaring that abortion is not a constitutionally protected right in the Commonwealth.

On Thursday, Duke said laws would not stop abortion in places like Kentucky, but instead only limit access to it.

“Wealthy individuals and those with resources and power will always be able to access abortion,” she said. “The impact of these abortion bans will be felt largely by Black, Latino and indigenous people, immigrants and people living with low incomes and those in rural areas; Communities that have long faced barriers to abortion access due to systemic barriers and discrimination.”