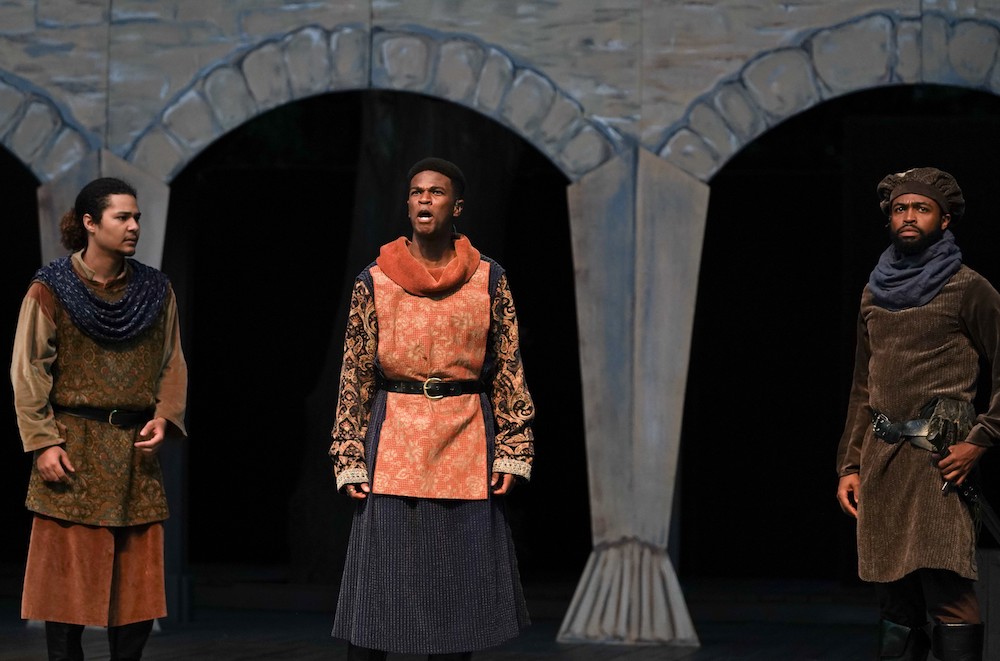 Very early on in “Richard III,” Shakespeare gives us one of the most astonishing scenes in the 2,500 year history of western theatre. Immediately after the famous opening monologue (“Now is the winter of our discontent…”), we see a funeral procession. It’s an embarrassingly small party, considering that the body being transported is that of the just-deceased King Henry VI: there is only a single mourner, Lady Anne. The king had been Anne’s father-in-law. And her husband, Prince Edward, would have been heir to the throne of England.

But that line of succession had been blocked by the deaths of both men.

And both of those deaths had been at the hand or at the command of Richard, as part of his bloody path to the throne.

In this scene, Richard first intercepts the funeral procession — then proceeds to court the Lady Anne, by telling her that her beauty and his love for her were what drove him to these murders. He would “undertake the death of all the world,” he says, to “live one hour in her sweet bosom.”

No other writer in the English language has so comprehensively and brilliantly explored the rhetorical tactics and strategies of seduction as Shakespeare. The plays are full of amorous madcap courtships, cross-dressing confusions, moonlit romances and love scenes delicate and earthy. And beyond the love scenes are the darker seductions that suck people into conspiracies and murders.

But here Shakespeare gives us a murderer chatting up a woman whose hatred for him is fresh and hot. It’s an amazing and — face it — a completely implausible scenario.

Unless, of course, the people playing the roles can play it with absolute conviction and authority.

By now, anyone who has been following Kentucky Shakespeare knows that it has become a formidable company of players who can pretty much do anything. And this scene is proof of that.

In this KyShakes’ production of Richard III, Richard is played by Neill Robertson — who is among the most charismatic and insightful actors to play on Louisville stages in the quarter century I’ve been writing about theatre.

But Robertson is not alone in this scene. Lady Anne is played by Ashley Nicole Cabrera who, according to the program, is in her second KyShakes season and is just starting an MFA program at UofL.

The arc of this scene (cannot work without great direction that elicits nuanced ferocity from both performers. I saw the play twice last weekend, and both times was caught up in the urgency of Richard’s wants and Anne’s fall into his sway. (Late in the play, after the bloodbath, and not long before Richard’s plans start to collapse, there’s another equally astonishing scene that serves as a bookend to the action. It’d a seduction by proxy, where Richard accosts a terrified Queen Elizabeth (no, not that one!) who fears that he now plans to kill her daughter….. Instead, he tells her he’s in love with her daughter, and asks for advice on how to win her over. Here again, we see two superb actors testing each other: Robertson and Mollie Murk.

Throughout this play, the interactions feel dynamic and alive. And it’s worth noting that though the play is populated with memorable male characters, it’s the women whose relationships with Richard, with one another, and with their children — the daughters of Clarence (Leilani Bracey; Kyah Young); Princess Elizabeth (Arianna Martin); the charming but fated brothers, the young Duke of York (Liliana Úcan Shadle) and Prince Edward (Austin Ramirez) — whose energy and passion ignite and humanize the action. Besides those mentioned above, there is extraordinary work here from Abigail Bailey Maupin as the grief-maddened Queen Margaret, master of chilling curses; and from Jennifer Pennington as the Duchess of York — who bitterly regrets having ever given birth to Richard.

To pick up the thread, much of this play feels like a study in seduction that highlights Richard’s powers in every relationship. In that regard, it serves as a useful object lesson for our time.

I’ve never seen a Richard quite like the one Robertson and Director Amy Attaway have brought to life in this production. It’s not uncommon for actors playing Richard to revel in the extreme trope of the misbegotten, malformed, angry man driven by hatred and bitterness. But a fully-formed Richard has to be rooted in some measure of principles and ideals (no matter how objectionable. And he must have a preternatural ability to understand and connect with the appetites that feed the people he needs to manipulate.

And we see those skills emerging from the beginning, when Robertson delivers the opening monologue in a frumpy, ill-fitting outfit that signals vulnerability rather than narcissism (costumes by Donna Lawrence-Downs). We see it in the way Richard pulls us into his world view not by pandering to us, or asking for our approval, but through a kind of transparency that makes us feel that we’re being allowed into the secret. By the time that monologue has won us over, everything that follows seems perfectly plausible. Later, people may cheer when Richard is brought down, but first we find ourselves in the same relationship to him as all those he draws into his net before discarding them once they have no value: the Duke of Buckingham (Gregory Maupin) whose conscience never catches up with him, until he himself is wronged; Richard’s brother Clarence (Tyler Tate) who is assassinated by Richard’s agents; the ancient and vulnerable King Edward IV (Jon Huffman), who dies thinking he’s responsible for Clarence’s death; Richard’s ever-loyal minion Catesby (Brittany “BeeBee” Patillo);  Earl Rivers (Shaquile Townes), whose ghost will rise to haunt Richard on the eve of his final battle; Brakenbury (Justin M. Jackson), the steward of the Tower of London, the loyal follower who turns his back while Clarence is murdered; Lord Hastings (Keith McGill), whose loyalty to Richard will cost him his head; the slain Lord Grey (Nick Wills), and the doggedly loyal (and always fatal) Ratcliffe (Tom Luce) and Tyrell (Tony Reimonenq III) who assassinated the two young Princes.

Year over year, under Matt Wallace’s artistic direction, Kentucky Shakespeare goes from strength to strength. Earlier this season (and returning in a few weeks) jazz-inflected “Twelfth Night” was a wonder and his “Merry Wives of Windsor,” which opens as the next production, will be a highlight of the summer.

But for many of us, it’s been a revelation to watch the progress of Director Amy Attaway’s history play cycle which kicked off in 2017. The history plays are often shrouded by the misconception that they are dry stuff, bereft of entertainment value. But that’s nonsense. Especially when they are tackled by a great corps of actors and technical theatre technicians. The composition of the company has shifted over the years as new people have come on board and others have moved on to other projects, but, at this moment, this company is operating at an extraordinary level of excellence that deserves your attention. Besides, it’s free.

And though it can’t be said to have a happy ending — it is a tragedy after all — it closes with an amazing ghost scene, a thrilling battle and a win for the good guys, in the person of Earl of Richmond (Braden McCampbell).