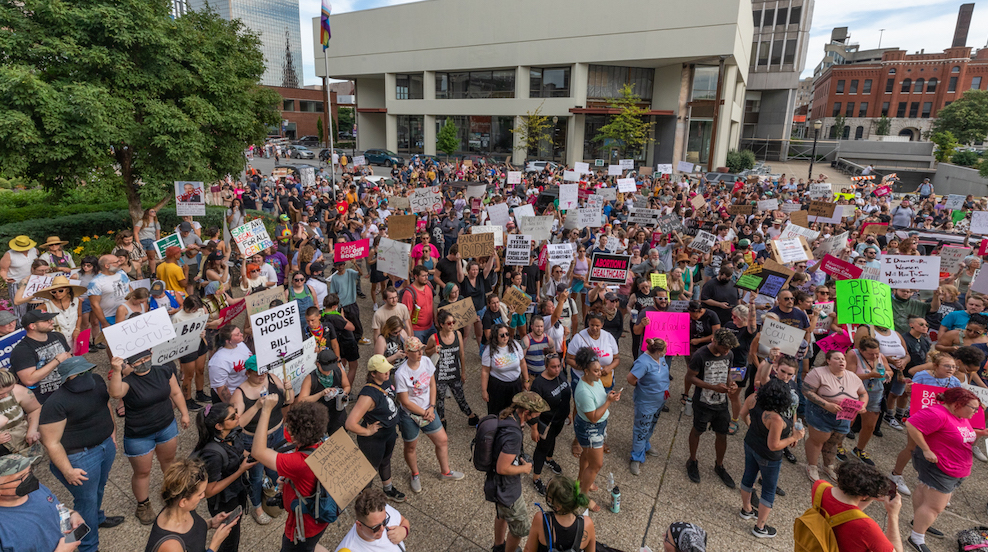 The ACLU, the ACLU of Kentucky and Planned Parenthood Northwest, Hawai’i, Alaska, Indiana, Kentucky filed the lawsuit on behalf of Kentucky’s two abortion providers, which both stopped operations on Friday. The lawsuit takes aim at the “trigger ban” that criminalized abortion services with an overturn of Roe v Wade as well as a separate law that barred abortions if cardiac activity was detected, which can occur as early as six weeks.

“We hope the court blocks Kentucky’s abortion bans to prevent the life-altering harm they are causing,” said Brigitte Amiri, deputy director of the ACLU Reproductive Freedom Project. “Since Friday, Kentuckians have been turned away from appointments and denied the ability to control their own bodies and futures. The impacts will be long-lasting, with countless people enduring serious health risks from forced pregnancy and childbirth, making it harder to escape poverty, and derailing education, career and life plans.”

The state-level lawsuit argues that the abortion bans are unconstitutional by violating rights of privacy and self-determination. Additionally, the lawsuit charges that the trigger ban is “unconstitutionally vague,” claiming its language is unclear as to when exactly the ban goes into effect.

Abortions in Kentucky were stopped for about a week in April after a bill providers called a ‘de facto ban’ was made law. However, after abortion providers launched a federal lawsuit, a  judge temporarily blocked the law from taking effect pending the outcome of the Mississippi case that ultimately saw the overturn of Roe v Wade on Friday.

In 2019, Kentucky signed into law “trigger” legislation, that, upon the overturn of Roe v Wade, would make performing an abortion procedure or providing pregnancy-terminating medication punishable by up to five years in prison. Kentucky’s abortion ban is among the most restrictive in the nation as it does not provide exceptions for cases of rape or incest, only in cases where a pregnant woman’s life is in jeopardy.

You can read the text of the lawsuit here.