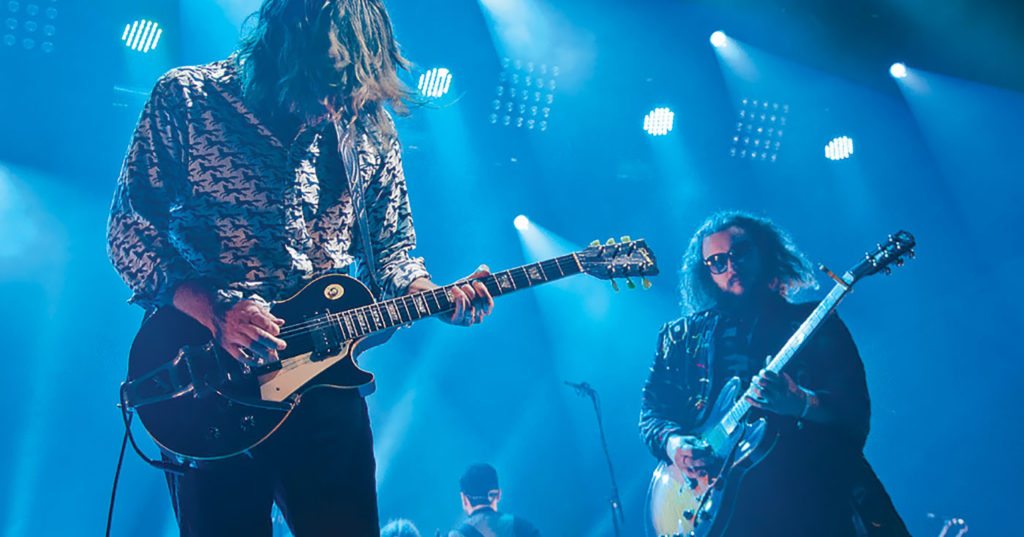 My Morning Jacket at Forecastle 2015. Photo by Nik Vechery.

For more than 20 years, My Morning Jacket has morphed their gigantic psych-rock sound into an entire universe, creating an expansive discography that shines with versatility and innovation, all while being one of the most storied live bands of a generation.

And despite receiving international acclaim, you’re likely to see members of the band still pop up in the crowd of a concert by an under-the-radar local band. That ethos transfers into this weekend, when My Morning Jacket will play a two-night stand in town, the first shows by the band in Louisville in six years. There will be local openers, local food trucks and a local nonprofit will receive proceeds.

On Friday, June 24, My Morning Jacket will perform an already sold-out show at Iroquois Amphitheater. Kiana and the Sun Kings and River City Drum Corp will open, and the show will benefit Change Today, Change Tomorrow, a Louisville-based nonprofit working to fight racial injustice.

On Saturday, June 25, the band will play at Waterfront Park. Louisville Leopard Percussionists and Producing a Kind Generation are set to open. Tickets are $59.50 before fees.

Before the concerts, LEO caught up with frontman Jim James.

LEO: The two-day, back-to-back shows are My Morning Jacket’s first shows in Louisville in six years, and you guys seem to be going all out for them, with the local bands, the local food trucks, the local nonprofits, et cetera, et cetera. What sort of inspired going all out, instead of a quote-unquote ‘normal’ show?
Jim James: Well, Louisville is the heart and the soul of the band — it’s where we started, it’s where most of us still live. We try to do it everywhere we go, to engage the local community, to some aspect. But, obviously, here in Louisville, since this is our hometown, we really just wanted to highlight some stuff that’s going on in town, so people can kind of see and bathe in how special of a place it is. It’s such a cool thing for people to get to come together like this, and I feel like we all — myself included as a concert-goer — we all know how powerful it is to get together with people again, after the lockdown and pandemic and stuff. So, that’s just something that we’re trying to make as joyous and as much of a celebration of the local community as possible.

On a similar note, I think I saw you at Poorcastle [a small, all-local-acts music festival], and I know you spend some time at the mid-sized venues like Headliners and Zanzabar: What’s important to you about sort of staying connected to the local music scene as much as possible and showing up?
Music is what fuels my life. I feel like there is so much great creativity here in town. There’s always so much amazing stuff going on, so that’s just part of what makes me inspired and what I love about life, is just that connecting with music, and I feel like it’s something that I almost can’t stay away from. There are so many people doing so many great things here — so many great venues and bars and Poorcastle and Forecastle. There’s so much great stuff on every scale.

Let’s talk a little bit about the latest album, self-titled. It seems to have a lot of social and political urgency on it. Can you break down some of the themes on that record?
There’s a lot. I’m thinking about where to even start. I really feel like we want to be a source of peace and love and acceptance, and I really feel like one of the main things that I always think about, and I feel like I talk about it a lot is just like, ‘How do we not get eaten alive by technology?’ And, “How do we use technology as a tool to learn to love each better and be more accepting and more tolerant and more inclusive in our lives in the real world?’ A lot of times, I feel, technology has only divided us in a lot of ways, and made the world a meaner place. I meditate a lot on that, and write about that a lot.

This deep into the band’s career, why was the album released as self-titled? Was it a reinvention of sorts? I’m always interested when bands have a later album titled: ‘self-titled.’
Yeah, yeah, it had been while since we had released anything, and there was a time when we took a hiatus and weren’t really sure if we were going to keep going or not, and it just felt really great to know that when we got back together that we’re still united and still love playing music together. So, it just felt like a good time to use your self-titled card option. I’ve always just loved that every band has a self-titled record — there’s just something so special about that to me, so it just felt like the right time for us to do that.

Let’s backtrack to the beginning of the pandemic. During the shutdown, during the heart of the pandemic, what did an average day look like for you? And what was your creative process like during that?
It was really brutal for me. It sent me into severe depression. I don’t deal well in isolation, and I was just completely isolated. I was pretty freaked out, too. I know that people had different degrees of how strict they were and how freaked out they were or were not. There were just, like, months where I didn’t even give anybody a hug, so it was a brutal time for me and I was just super depressed and I wasn’t really creative at all.

In hindsight, it’s been a really great lesson in gratitude — just trying to stay grateful for the people in your life, and being grateful to be able to do concerts again and being able to go out again and see people. It just really fills me with a new gratitude and I’m really just trying to live day-by-day and be grateful for the simple things. Because, during the pandemic, that’s all you had — maybe the walk that day or maybe the album you’re listening to, or the book you’re reading. You knew there wasn’t going to be anything else, because you were kind of trapped and I think it was a good lesson in gratitude.

What was the catalyst of getting you through the threshold of creating again? Or gathering back up with My Morning Jacket? Was there a moment, or was it just sort of things deflating and calming down a little bit?
The My Morning Jacket piece of it was hilarious because we were all revved up and ready to go [right before the pandemic]. We had already record the album and — I finished mixing it during the pandemic, but we had already recorded it — so we were all ready to go in 2020, and so we had to shut that down. That was kind of easy to come back to life because we were so excited to get the album out and play shows again and stuff.

For me personally, I just have come to this acceptance that there are a lot of things that I can’t control. I think that we all want to have more control over our lives than we do a lot of times. But, with creativity, I just have to sort of ride the wave, because sometimes it’s gone and sometimes I’m lost in depression and I don’t ever think I’ll pick up a guitar again. And then the wave will change and I’ll feel super inspired and I can’t not pick up a guitar and I can’t not go in the studio, working myself insane. So it’s like, I just kind of try to ride those ups and downs.

You touched on this a little bit earlier, but I still wanted to ask it: At this point in your career, what do you hope people take away from your music? Or, how do you hope the music inspires or impacts a person?
Well, music has kept me alive, so I hope our music can be a part of doing that for other people. I hope that, in their dark hours, what we do brings people comfort. And, in the celebration times, people enjoy celebrating to our music too. That’s part of what makes the live music thing so powerful for all of us: That feeling that you get to experience with your favorite music, and that you get to experience it with other people that you’re connecting with. I think it just kind of takes us back to a very primal, natural thing. I hope when people come see us, or listen to our records, they find the comfort, the joy, the celebrating and the mourning, the grieving and all of those things that sometimes are hard for people to talk about, or hard for people to do, but music somehow gives you that energetic push that you need. •