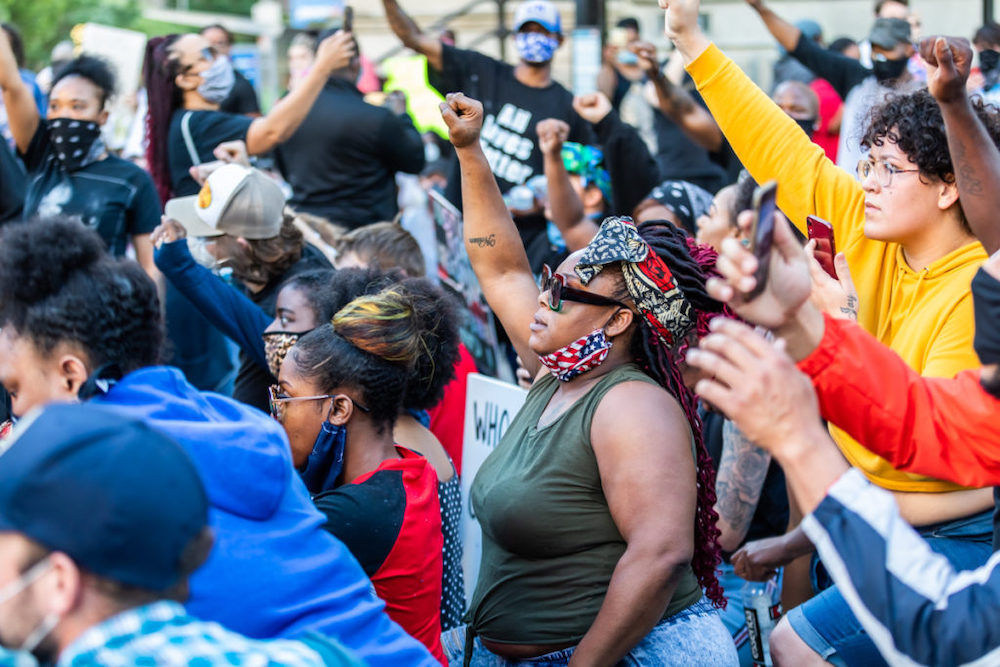 Protesters raised their fists in solidarity during a protest in May of 2020. | Photo by Kathryn Harrington.

On September 15, 2020 — just eight days before the announcement that no officers would be charged in Breonna Taylor’s killing — Louisville Mayor Greg Fischer took the podium at Metro Hall to announce a $12 million settlement with the family of the 26-year-old Black ER tech who was killed by the Louisville Metro Police Department.

The lawsuit settlement was not just about money: As part of the settlement, Fischer said, the city had agreed to make “several important policy changes.”

The first three changes Fischer mentioned, just moments after he announced the settlement, all had to do with improving the relationship between the police and a community that had little trust in the police.

Taking off her Breonna Taylor mask to speak at the podium, Taylor family lawyer Lonita Baker said that a financial settlement was “non-negotiable” without significant reform.

“We sought forth as we went through negotiating the terms of this settlement… to engage police officers within the community, not just when they are dispatched to runs, but to get out, to volunteer in those communities in which they serve, to get to know their communities in other settings,” she said. “To live within their communities. To dispatch social workers when they’re needed for mental health crises.”

Two years after the outbreak of mass protests over Taylor’s death — and almost two years since the announcement of the wide-ranging police reforms — LEO Weekly checked up on the implementation of those community-focused policing changes.

POLICE LIVING IN THE COMMUNITIES THEY SERVE

Flanked by Baker, the first change that Fischer announced was about getting more police officers to live in the neighborhoods where they work.

“First, to build stronger community connections between our police officers and the people they serve, we will, one, establish a housing credit program to incentivize officers to live in certain low income census tracts within the city,” he said.

In the contracts between the police union and the city signed last year, a provision was included whereby police officers who purchase a primary residence in a low or moderate income census tract would be eligible for $5,000 in downpayment assistance.

According to the map provided in the police contracts, the eligible zones cover large swathes of the city, including the entirety of downtown and the West End.

Despite the offer of cash assistance in a seller’s real estate market, the program has not been popular.

During an LMPD budget hearing at Metro Council on May 24, District 21 Councilwoman Nicole George asked the department’s leadership if anyone took advantage of the downpayment assistance program.

“Not that we know of, no ma’am,” said deputy chief Paul Humphrey.

George responded by saying that was “disappointing” but “an opportunity.”

Contacted by LEO, LMPD said the number of officers who advantage of the downpayment assistance remained zero. The department did not respond to questions about how widely advertised it had been and if officers had shown interest in the program.

The second community-focused police reform announced by Fischer in September 2020 was a program to encourage volunteer work by officers.

“We will encourage officers to volunteer two paid hours every two-week pay period during their regular work shift at an organization in the community that they serve,” said Fischer.

In a written response to questions from LEO, LMPD’s deputy chief Humphrey said the department did not track how many officers participated in the program.

He added: “Officers are highly encouraged to volunteer and participate in community programs. We recently created the Police Activities League to have structured programs for officers to have meaningful and productive interactions with [youth]. We have numerous officers who volunteer with multiple organizations such as the Greater Saint Mark Church Thanksgiving meal delivery, Shop With a Cop, reading with children at churches. Many of these activities are done with LMPD while many officers volunteer on their own.”

Humphrey referred LEO to LMPD’s social media pages to get a better understanding of the volunteering activities officers participate in.

The Police Activities League that Humphrey mentioned was launched in January of this year in an effort to build bridges between police and youth. On its website, the league lists boxing, running, archery, fishing, basketball and cooking as activities being offered this year. In the future, according to the league’s website, it will gauge interest in other activities, including a book club, wrestling, mixed-martial arts, camping, chess and electronic gaming.

Likely the most complicated of the community-related police reforms announced by Fischer two years ago was the intent to have social workers respond to some emergency calls.

“We often ask our police officers to not only keep the peace, but to deal with challenges that society has failed to address. From mental health to homelessness, to substance abuse and everything in between. That’s not fair to our officers. That’s not the right way to address these challenges,” said Fischer at the time. “That’s why we will create a program to include social workers at LMPD so they can provide support and assistance on certain police runs where their assistance can be helpful.”

After much study and planning, a limited pilot 911 deflection program offering a non-police response to some emergencies started taking calls in March of this year.

If an in-person response is deemed necessary and the situation is determined to be safe, a non-police mobile response team is dispatched.

Between March 21 and April 25, the program saw more than 70 calls according to records obtained by LEO through Kentucky’s open records law.

If successful, officials hope to roll the program out citywide.