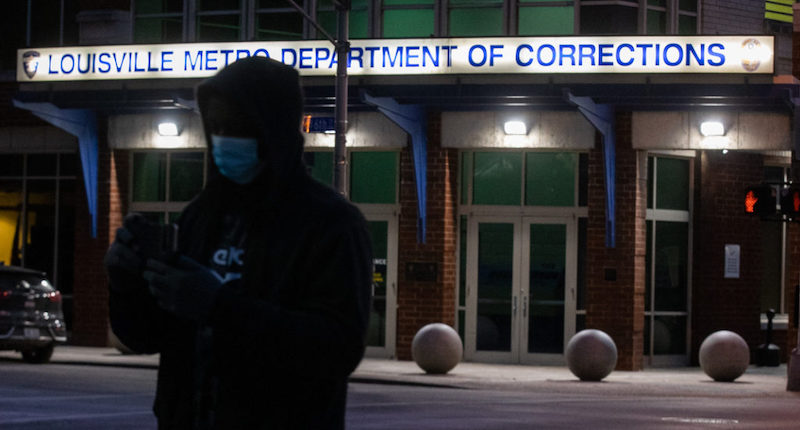 A former correction officer at Louisville’s jail has been federally charged. | Photo By Carolyn Brown.

A former correction officer at Louisville’s jail has been federally charged with using unreasonable force against a pretrial detainee for a Dec. 2020 incident that left an inmate with a broken jaw.

In a statement on Wednesday, the Department of Justice said that former Louisville Metro Department of Corrections officer Darrell Taylor, 32, had been indicted by a federal grand jury in Louisville. He is charged with one count of deprivation of rights under color of law, which carries a maximum penalty of ten years in prison.

A federal indictment says that Taylor “punched B.R. multiple times in the face and slammed B.R. face first into the ground, resulting in bodily injury to B.R., including a broken jaw.”

Federal charging documents only identify victims of crimes by their initials.

A federal lawsuit filed in November of last year against Taylor, the city and former LMDC Director Dwayne Clark alleges that on the morning of Dec. 15, 2020, Taylor punched inmate Brandon Robertson several times in the face before slamming his head into the concrete floor, causing him to lose consciousness. The lawsuit says Taylor then dragged Robertson to a cell and left him there handcuffed and unconscious in a pool of blood.

After being brought to UofL Hospital more than an hour later, Robertson was determined to have suffered a broken jaw, a fracture of the facial zygomatic bone and a busted lip, according to the lawsuit. After the incident, Robertson suffered from a long list of physical and mental ailments, the lawsuit alleges.

In responses to the lawsuit, which remain pending, lawyers representing the city and Taylor denied alleged wrongdoing.

Complaints in lawsuits represent only one party’s version of events.

Louisville’s jail has been under intense scrutiny in recent months after eight inmates died since late November. Last month, a food services contract employee was arrested at the jail, accused of smuggling drugs into the facility.