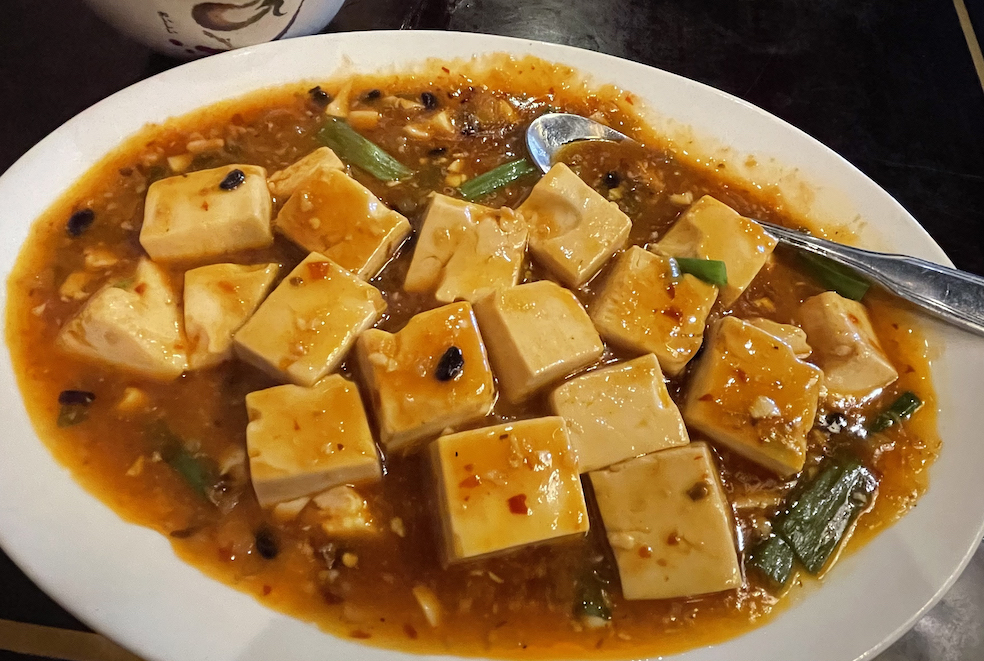 Mapo tofu, another Sichuan standard, is a simple but appealing preparation of silken tofu cubes bathed in a glossy, thick sauce with black beans and plenty of spicy red-chile flakes. | Photo by Robin Garr.

China’s 1.4 billion population in 2022 is roughly four times the size of our 335 million people, and they enjoy at least eight major regional cuisines dating back thousands of years.

So why is it, if we don’t think twice about enjoying the varieties of American fare —  Southern chow, Cajun cuisine, Texas barbecue and so many more of our own regional cuisines — that most Americans for many years assumed that all Chinese food was summed up in the menu at the local chop suey house?

Years ago, this narrow vision started to change a little. We got a few fancy Chinese places offering dishes that we thought were authentic. Then came some regional spots offering the spicy dishes of Sichuan and Hunan, often combined in a single eatery. The cognoscenti started to sniff and look down their noses at chop suey and fried rice.

You can still get those dishes around town, of course, at a neighborhood Chinese eatery or even buried in the extensive menu of a fancier place. Lots of people love it. Let’s not shame them.

It comes down to this: There are probably more Chinese restaurants around Louisville these days than ever. Many are immigrant-run fast-food Chinese spots that seem to set up near just about every supermarket in town.

But Louisville’s heyday of serious regional Chinese eateries with skilled chefs who came from Taiwan, Hong Kong, or the Chinese mainland seems to have crested years ago, perhaps marked by the 2008 closure of the fabled Red Pepper Chinese.

Now that it’s easy to find fast-food Chinese just about everywhere, and now that our growing crowd of immigrant neighbors offers us a wider choice of world cuisine than ever before, it seems that we don’t often think about going for serious Chinese anymore.

But when I do hanker for a memorable Chinese meal that goes beyond the standard shopping-center menu, I’ll happily make the long trek out past Middletown for an outstanding meal at Jasmine Chinese Cuisine.

Breaking with the old tradition of offering two menus, one for Westerners and another for Chinese patrons, Jasmine brings it all together with about 200 dishes on the Chinese menu, each dish described in both Chinese and English.

Jasmine also offers an extensive list of sushi specialties, including about 50 makizushi rolls. But it’s really hard for me to come to Jasmine and order anything but Sichuanese.

We started with cold cucumber salad ($6.99), which sounds simple but is anything but. Fresh cucumbers had been seeded and cut at an angle into long half-moon slices, then artfully assembled into a neat, pale-green mound, topped with a pile of lemongrass rounds, snipped green onions, and shreds of ginger, then drizzled with a soy sauce and chile oil dressing. The tangy-salty-spicy flavor combination was remarkably subtle and complex.

Tea-smoked duck ($19.99) is made with a multi-step process. It involves a dry-rub marinade of Sichuan pepper, salt, ginger and garlic, followed by a quick dip in boiling water, then a few minutes of smoking over black tea leaves in a closed wok, and finally a deep fry to crisp the skin.

What appeared to be a whole duck was chopped into chunks through the bones and neatly arranged on a white oval platter. The skin was as crisp as fatty duck skin can get, reminiscent of pork cracklings, and the meat was juicy and delicious. The tea-smoke flavor is more subtle than forward, but the complex mix of smoke and astringent Sichuan peppercorns make this dish memorable. It comes with a small tub of thick, sweet hoisin sauce for dipping.

Another characteristic Sichuanese dish is mapo tofu ($10.99), a dish that purportedly originated in Chengdu, Sichuan, in the 19th century and got its name — literally “pock-marked grandmother’s tofu” — from the restaurateur’s wrinkled face and the similar dots of red chile flakes and black beans against snow-white tofu. That description fits Jasmine’s version, which cloaked about 16 inch-square cubes of tender silken tofu in a glossy, cornstarch-thickened sauce scented with Sichuan pepper and loaded with spicy chiles, tiny black beans and strips of green onion.