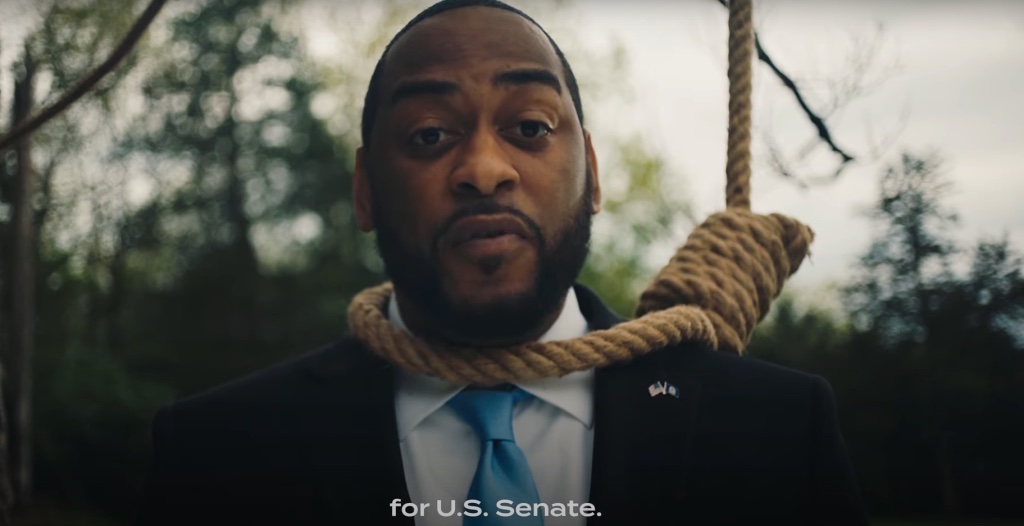 In an interview with LEO, Democratic candidate for U.S. Senate Charles Booker said he “felt a responsibility” to make his new campaign ad, which features him with a noose around his neck criticizing incumbent Rand Paul for blocking an antilynching act from becoming federal law in 2020.

Paul was the lone Senator that controversially stalled historic antilynching legislation in 2020, drawing the anger of colleagues and activists. Back then, he argued that the bill as it was could “conflate lesser crimes with lynching.” This year, Paul co-sponsored an updated version of the Emmett Till Antilynching Act, which unanimously passed the Senate and President Biden signed into law in March.

In the ad — which has a content warning for “strong imagery” — Booker says, “The pain of our past persists to this day. In Kentucky, like many states throughout the South, lynching was a tool of terror. It was used to kill hopes for freedom. It was used to kill my ancestors. Now, in a historic victory for our Commonwealth, I have become the first Black Kentuckian to receive the Democratic nomination for U.S. Senate.”

“My opponent,” Booker continues, “the very person who compared expanded health care to slavery. The person who said he would have opposed the Civil Rights Act. The person who single-handedly blocked an antilynching act from being federal law. The choice couldn’t be clearer.”

In the interview with LEO on Wednesday, Booker said, “It was hard to do. But I really felt a responsibility to help shine a light in a way that can help us to look at things differently by humanizing issues and being vulnerable. It helps to break down barriers, and can help give us more room to listen.”

Paul did not immediately respond to LEO’s request for comment.

In the ad, when he said Paul compared “expanded health care to slavery,” Booker is likely referencing the sitting Senator’s comments at a 2011 HELP Subcommittee on Primary Health and Aging about the right to health care.

“With regard to the idea whether or not you have a right to health care you have to realize what that implies,” Paul said in the meeting. “I am a physician. You have a right to come to my house and conscript me. It means you believe in slavery. You are going to enslave not only me but the janitor at my hospital, the person who cleans my office, the assistants, the nurses. … You are basically saying you believe in slavery.”

When Booker says in the ad that Paul “would have opposed the Civil Rights Act,” that appears to be a reference to a comment Paul said to the Courier Journal’s Editorial Board in 2010 after he was asked whether he would have voted for the Act in 1964.

“I like the Civil Rights Act in the sense that it ended discrimination in all public domains and I’m all in favor of that,” Paul said to the newspaper’s board. “I don’t like the idea of telling private business owners… I abhor racism. I think it’s a bad business decision to ever exclude anybody from your restaurant, but, at the same time, I do believe in private ownership, but there should be absolutely no discrimination in anything that gets any public funding.”

Since that interview, Paul has attempted to break past his comments, and show support for the Civil Rights Act.

But Booker believes that when Paul has changed his stance on these issues, it’s by design.

“Rand Paul is making a mockery of our lives,” Booker told LEO. “He is gaslighting the entire country. He has built a career out of stirring controversy and hiding when everyone fights amongst themselves.”