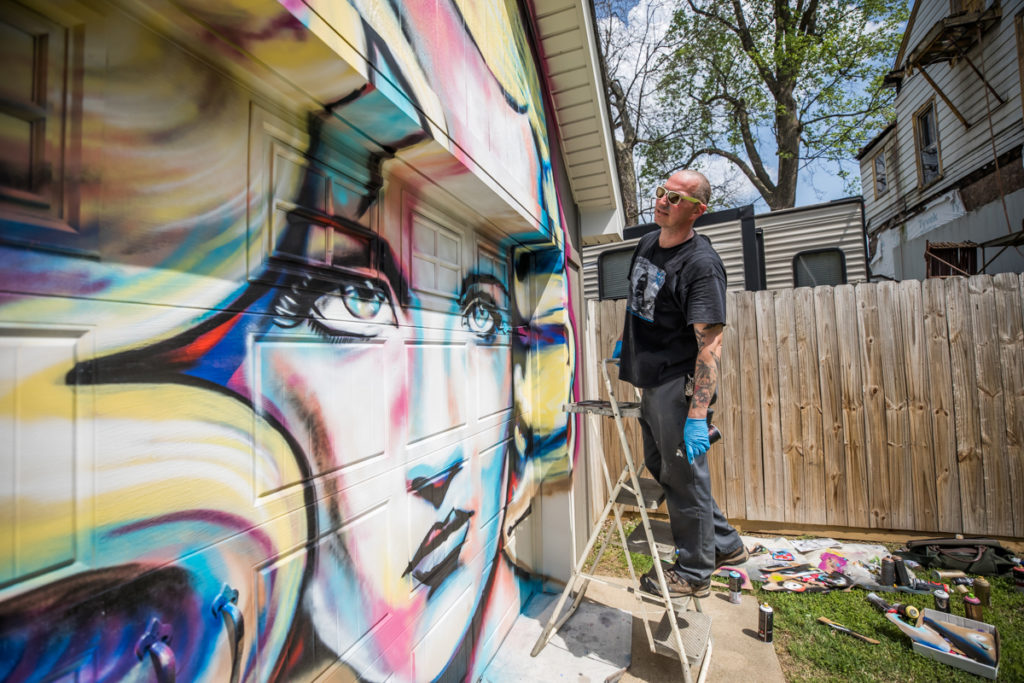 Damon Thompson looks over his nearly completed mural of Carole Lombard in Jeffersonville.Photo by Kathryn Harrington

When the pandemic hit, the world became a bit rocky for everyone. For local artist and muralist Damon Thompson, the pandemic arrived with the loss of a job. “I started the project the day after my work laid off all employees,” Thompson said in an email to LEO. “I had been working at the retail store of Habitat Restore and they told me I would get two more paychecks, but couldn’t tell me when we would be back at work.”

The project he started? A series of garage and building murals that would get him out of the house.

“I didn’t want to have to spend that time locked inside my house, it was springtime and beautiful outside,” said Thompson.  “So I made a post on Facebook asking if anyone would let me show up with my spray paint and paint on their property. Only one person replied to that first post.”

The first project was a large Elizabeth Taylor, and after that Thompson’s project took off. (In fact, even I sent Thompson a message telling him he could paint the shed in my yard.) It was such a beautiful gesture, and during the early days of the pandemic, the offer of someone adding color to days that felt very dark was welcome.

“By the second week I had a list of over 40 people,” said Thompson. “And, by the time I went back to work at Habitat Restore that list had grown to over 70.”

Now Thompson, with the help of Cameron Deeb, who documented the murals, is hosting a Kickstarter campaign to complete a book documenting his works done over the course of the pandemic. The book is called, “Outside Society: the art of Damon Thompson.” The murals Thompson created include pop culture figures from all genres: film, art, music, tattooing, etc.

Thompson didn’t begin as a muralist or graffiti artist. He started drawing and painting as a teen, but only in the few years before the pandemic did he begin to experiment with spray paint and graffiti.

“I painted faces next to graffiti pieces that my friends had painted,” said Thompson in the Kickstarter press release. “It’s a nice combination to have a character, or portrait, next to styled letters.”

To practice this style, Thompson initially built a large wall in his backyard.

“I built a 20-foot long and 8 foot-tall wall in my backyard so I could practice. I also had stock piled around 100 spray paint cans. I was determined to improve,” he said.

Deeb was interested from the start. Deeb runs the Louisville Arts Review and has written about many artists throughout the city.

“I have loved art and design since I was seven years old, when I created my first logo,” said Deeb in the release.  “When the Pandemic Mural Project presented itself, I was interested in documenting Damon’s artwork as a way to continue to show the amazing art and artists that spring from our fair city.”

The Kickstarter officially got underway on May 3 but will continue for the next month. The goal is set at $8,600, and more than half was funded within the first 24 hours. The amount of books printed will be determined by the amount of funds raised in the project.