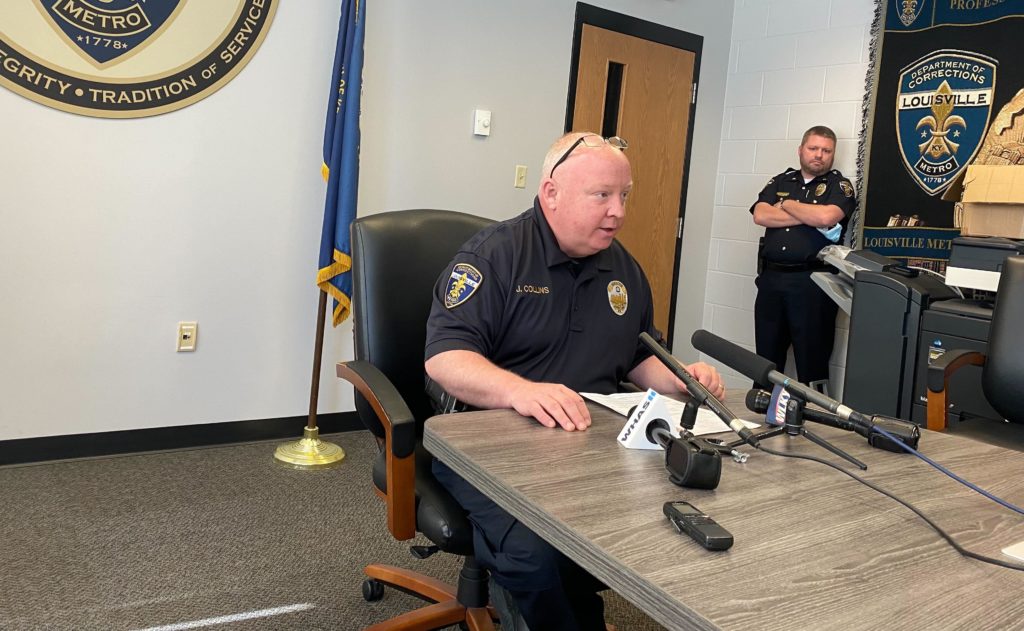 LMDC Director Jerry Collins speaks at a press briefing on May 9, 2022. Photo by Josh Wood.

Appearing in front of Metro Council’s Budget Committee on Tuesday, new Louisville Jail Director Jerry Collins said he was “optimistic” that improvements included in the Metro Corrections budget he was presenting could address safety concerns after eight inmates died in the facility since late November.

Collins, who took over as LMDC director last month, said the jail currently has only one suicide-resistant cell.

“I want to emphasize our agency’s commitment for the safety of both staff and individuals in our custody. Through the proposed budget, we are optimistic that much-needed interventions and resources will allow us to effectively address safety concerns as well as implement sustainable solutions,” he said.

Jail officials have previously pushed back against notions that the jail was unsafe, with assistant LMDC director Steve Durham telling LEO in February that, “People die in the emergency room waiting for care. They die on the tennis court. They die in the arms of their loved ones. And I wish we could do something to prevent people from dying in Metro Corrections — we can’t, we can’t always do that.”

Some of the proposed repair money, Collins said, would be spent on changes to a Liberty Street loading dock that he said had been an entry point for contraband for the two decades he’s been at LMDC.

In late March, the jail started providing photocopies of many mail items instead of physical letters in an attempt to curb drugs getting into the jail. On Tuesday, Collins said that the jail would be looking to move to digital mail for inmates.

He also said LMDC wanted to provide inmates with tablet computers, which would allow them to communicate with inmates, watch movies and reducing the likelihood that they would harm themselves.

Tuesday’s budget hearing was cut short as Collins had to attend an LMDC officer graduation ceremony; Metro Council’s Budget Committee said the hearing would be resumed at a future date.