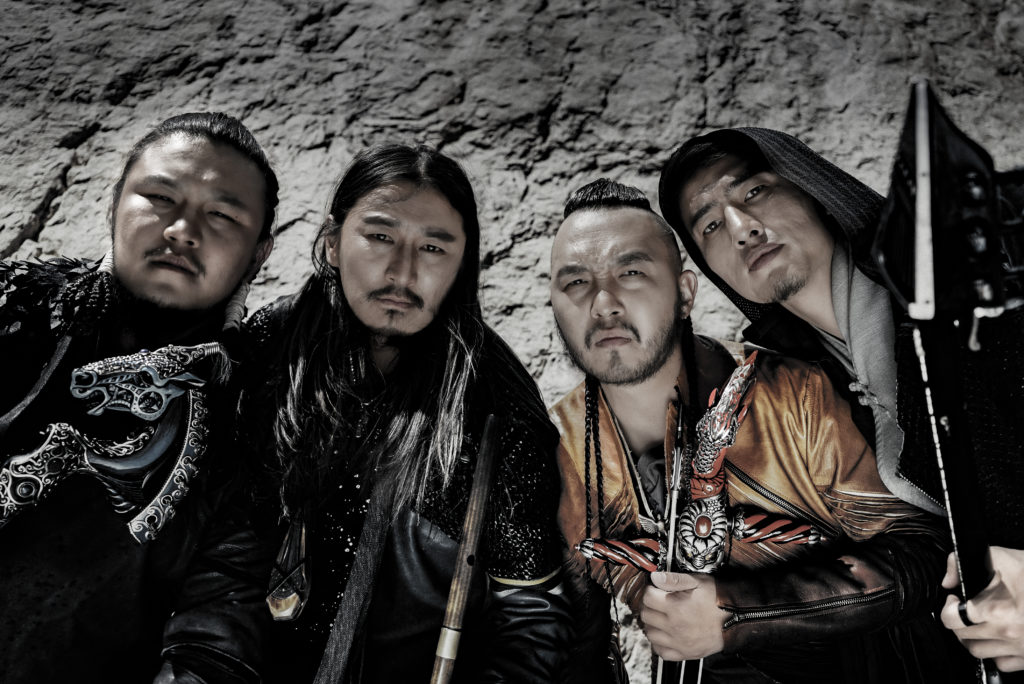 The Hu plays Mercury Ballroom this Wednesday May 11. Photo by E.Altankhuyag

One of the best outcomes of living in the modern world is the ability for those in cultures less understood to have the opportunity to introduce themselves in a way that demands both respect and attention. More than ever, people outside of what we consider the “Western world,” have the chance to be heard and to demand that their histories and stories are part of the greater human experience that previously had been controlled by the stories and “histories” perpetuated through the lens of Europeans.

When Mongolian folk/metal outfit, The Hu band sings about Chinggis Khaan (most often known as Genghis Khan in the West), it isn’t with blind romanticism or the fabulation that we’ve had in the Western world from our history books. They sing about an ancestor, a hero who they revere with great respect. He is their founding father and a leader who made it possible for the expansion of cultural awareness and trade by making the Silk Road a cohesive byway for commerce.

The Hu band is making a stop in Louisville, this Wednesday night at Mercury Ballroom. The Hu, named after the Mongolian root word for human, will bring their blend of traditional Mongolian instruments, throat singing known as khoomei and metal to the local audience. Their sound feels mighty and expansive, and whether you’re a fan of metal or not, The Hu band is one you should respect.

LEO got the chance to speak with band member, singer and multi-instrumentalist Nyamjantsan Galsanjamts, known simply as Jaya. For the interview we spoke with the aid of an interpreter.

LEO: I guess just sort of tell me about what you call “Hunnu rock.”

Nyamjantsan “Jaya” Galsanjamts: Hunnu is a new rock genre that is coming from central Asia and, specifically in Mongolia. This genre is brand new and offers our traditional music into the modern rock rock genre, and we’re bringing that to, to the world.

How did you discover rock music as a genre to explore?

It’s true for in any country, the modern music, especially American rock was… when it was created and booming, Mongolians also loved American rock, and in any way we can, the vinyl CDs, anything we can put our hands on, we would get from our neighboring countries, or wherever we’re visiting. Beatles and Queen, those are the bands that, at the time, would put a base on our modern music and genre as well.

You are absolutely correct. Our Mongolians love Metallica, and we had had an honor to recreate “Sad but True” and also “Through the Never,” and we were also one of the artists that was included in the Blacklist album of Metallica [a tribute album of various artists]. So it’s a great honor to be in there. It was a great boon to our Mongolian fans as well. There are many Mongolian fans who love Metallica and then they saw us with the great admiration that we had a chance to work with them.

How are you using your music to teach the world about Mongolia? Because I noticed that the songs are obviously history lessons and they challenge what Americans may know about Mongolia.

Good catch. Yeah, absolutely. There are many things that Mongolians brought, our ancestors brought, such as gerege is one of the first passports that you used across the world when you’re traveling. [It is also the inspiration for the name of the Hu’s first record, Gereg.]  We did trade with our neighboring countries. The Silk Road was invented by the Mongolians. And, there are so many aspects that our ancestors created that we don’t even know to this to this day.

So on top of sharing our history, we also wanna share the message of, like, having the core values of respecting your elders and parents, as well as respecting, most importantly, nature and the relationship that we have to have with nature. Things that we easily ignore on a day to day basis. We try to remind our fans and our listeners about those core values that need to be remembered every day.

How has the pandemic affected your work and ability to create?

We had an enormous amount of time. We put a lot of effort into it and because of the lockdown, we had a chance to really focus on those. So I think it had ups and downs but I think it  impacted our second album very positively. And yeah, and we’re, we can’t wait to share our second album with our fans, and I think it will be a great one.

When does the second album come out?

It should come soon.

This is our third tour.  Yes, we have.

I know the band has received great support inside Mongolia and met former President Khaltmaagiin Battulga. So how has that support helped propel your music outside of Mongolia? How does that make you feel to be honored by your country?

It is such a great honor to be receiving the Order of Chinggis Khaan medal and support from government means a lot to us because, when we were starting out, there were many financial supports offered from our government for our us to start our first video and after our second tour in American, when we came back, they appointed us for the Great Chinggis Khaan’s medal.

That, symbolically, was important to us because the Mongolians were cheering on us to do a cultural revolution, in terms of bringing positive representation into the world about Mongolia and to make people listen to our values and beliefs as a nation.

I think it is one of the greatest things… greatest medals that you can get as a Mongolian.