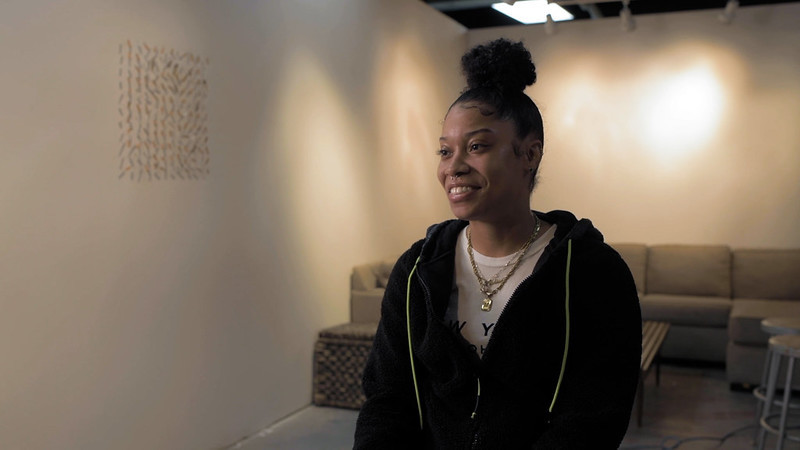 MacKenzie Taylor is one of the artists graduating from KyCAD's first BFA cohort as an independent school.Photo provided by KyCAD.

Four years ago, the Kentucky Council on Post-Secondary Education gave the recently separated Kentucky College of Art + Design the authority to grant a Bachelor of Fine Arts degree in Studio Art. This week, Old Louisville’s newest school is turning another big corner by graduating its first class and presenting its inaugural BFA thesis exhibition at the 849 Gallery.

This capstone show, which is on view through July 29, features delightfully disparate work from emerging Louisville artists Jada Lynn Dixon, Austin Kopp and MacKenzie Taylor, who collectively embody the KyCAD class of 2022.

“We could not have wished for a more dedicated group of artists as our first cohort of graduates,” KyCAD president Moira Scott Payne told LEO Weekly. According to Payne, the big achievements on display this week, “signal the beginning of our students’ individual creative journeys.”

Though she works in more traditional mediums, Dixon’s provocative thesis is centered around mental health and the role of trauma on human memory.

“When I first came to KyCAD, my hopes were to further develop my studio practice and quality of craftsmanship and refine my research processes to better inform my work,” she said. “With my thesis project I’ve done just that.”

Driven in part by social injustice, Kopp recalls that he initially came to KyCAD wanting to blur the line of what fashion and art can be in our modern society.

“The motivation behind my work in clothing is to provide people the opportunity for expression and ask them to consider the inaccessibility of high-end fashion and fine art,” Kopp explained. “I consumed fine art and luxury fashion through image-based material — it was never a physical thing I could grasp onto. That’s why I began to make it for myself.”

A nuanced storyteller, Taylor was primarily drawn to KyCAD’s experimental film program, and she’s always looking backward and forward with her lens. “My muse for my senior thesis is my genealogy — exploring how we all have different perspectives and why we hold weight to different things,” she said. “I was inspired by my grandfather and our connection since I never met him. Many of our family stories go back to him.”

While acknowledging that KyCAD’s graduation ceremony and related BFA thesis exhibition are the culmination of several intense years of study and practice, as well as a measure of specific students’ dreams realized, Payne is also noticeably grateful for all the forward motion within the wider campus community that has led to this monumental moment.

“As we come around our students, to celebrate their vision, talent and hard work, we can, and should, take a moment to reflect on how far we have grown over the last four years as Kentucky’s only independent college of art and design,” she said. “During the institution’s long evolution, the baton has been handed forward several times and each person involved — whether philanthropist, board member, faculty, staff or student — has become an important part of the unfolding story. This feels like another new beginning and we are excited by what the next chapter will bring.”

Payne stated that Chin was selected as keynote speaker, in large part, because his extensive body of work is in alignment with KyCAD’s interdisciplinary curriculum that folds the humanities and technology into the studio space. “Mel is a perfect example of an artist who works across disciplines using everything from mixed reality, video and gaming to traditional sculptural materials,” she said.

For more information about the current show at the 849 Gallery or the Kentucky College of Art + Design in general, visit www.kycad.org.