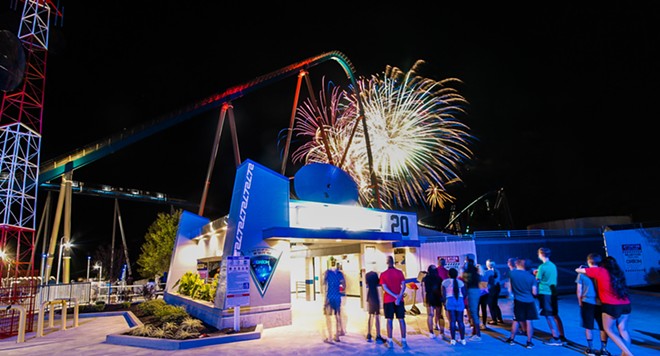 Celebrations for Kings Island’s 50th anniversary will be kicking off Memorial Day weekend.

The park’s nightly fireworks show will soon conclude with 200 synchronized drones, laser projections, fire bursts and plenty of fireworks that will tell the story of Kings Island over the past 50 years.

“Fun, Fireworks and Fifty – A Kings Island Nighttime Spectacular,” which is set to last for 14 minutes (four times longer than the show lasted in years past), will continue through the summer after its debut on Saturday, May 28.

Special guest Barry Williams (aka Greg Brady in the 1970s show “The Brady Bunch,” which filmed the famous “Cincinnati Kids” episode at the park in 1973) will be narrating the history of Kings Island live along with the fireworks during the show’s debut.

2022 has been a huge year for the park, the popular Timberwolf Amphitheatre — the reported birthplace of the term “Parrothead” for Jimmy Buffett fans — will also once again play host to some big summer concerts starting in June.