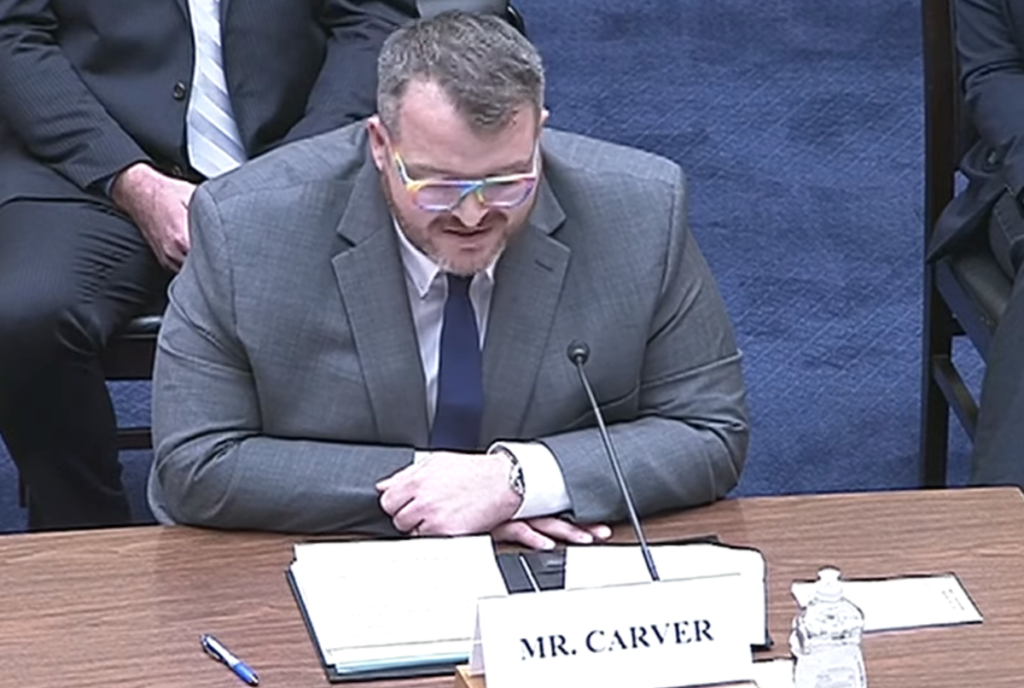 Willie Carver testifies before the House Committee on Oversight and Reform about LGBTQ discrimination in Kentucky schools. Photo: YouTube Screengrab

A Kentucky Teacher of the Year painted a picture of a dire situation for LGBTQ+ teachers and youth in Kentucky schools in testimony before a Congressional House committee hearing on classroom censorship on Thursday.

“I’ve always faced discrimination as a gay teacher, and I’ve weathered the storm because my presence saves lives,” said Willie Carver, who is currently on sabbatical from Montgomery County High School in Mt. Sterling, Kentucky.

But now, Carver has said online that he is afraid of returning to the classroom.

In his testimony, Carver, a teacher of 17 years, detailed a litany of transgressions from his school against him and the Gay Straight Alliance that he sponsors on campus.

Carver said that when GSA posters were torn from the wall, the principal responded by saying that people think LGBTQ advocacy is being shoved down their throats. Carver also claimed that the GSA was prevented from handing out an optional survey to students over fears that it would make straight children uncomfortable. And, he said, the school did not support the GSA when it was accused on social media of grooming children.

LEO reached out to the Montgomery County Schools’ superintendent for comment but has yet to receive a response.

Carver pointed out that similar things are happening to teachers in other Kentucky schools: Last month, a middle school teacher at Estill County Schools resigned when he received backlash for a message in class that said “You are free to be yourself with me,” with a drawing of a pride flag. The House Committee on Oversight and Reform hearing that Carver testified at was titled “Free Speech Under Attack,” and was organized to address similar situations happening in schools across the United States with regard to teachers discussing “American history, race and LGBTQ+ issues.” Recent examples cited include a teacher in Missouri who was let go after issuing a worksheet that addressed racial issues and an educator in Florida who resigned after parents demanded he face “consequences” after telling his students that he was gay and married.

Carver said that his name is “a liability” at his school and his work is not celebrated: He met with President Joe Biden at the White House this year but said it was not mentioned by the school in any announcements.

In his speech, Carver also took issue with the way the school has handled parent complaints about classroom materials featuring Black and LGBTQ authors. Carver said that teachers are told to accommodate parents who ask for alternative works, and materials are banned without following official processes. Meanwhile, he said, students use anti-LGBTQ and racist slurs without consequence.

Carver advocated for the passage of two pieces of legislation: One is the Safe Schools Improvement Act, which would require schools to create policies to prohibit harassment of elementary and secondary school students on the basis of their identity, including sexual orientation, gender identity and race. The other is the Equality Act, which would extend protections for LGBTQ people to more places, including bathrooms.

Carver said he is concerned with the high rates of LGBTQ youth considering and attempting suicide. Carver said he has received suicidal goodbye texts from students at night, and he now panics when his phone goes off after 10 p.m.

“Few LGBTQ teachers will survive this current storm,” said Carver. “Politicizing our existence has darkened schools. I am made invisible.”