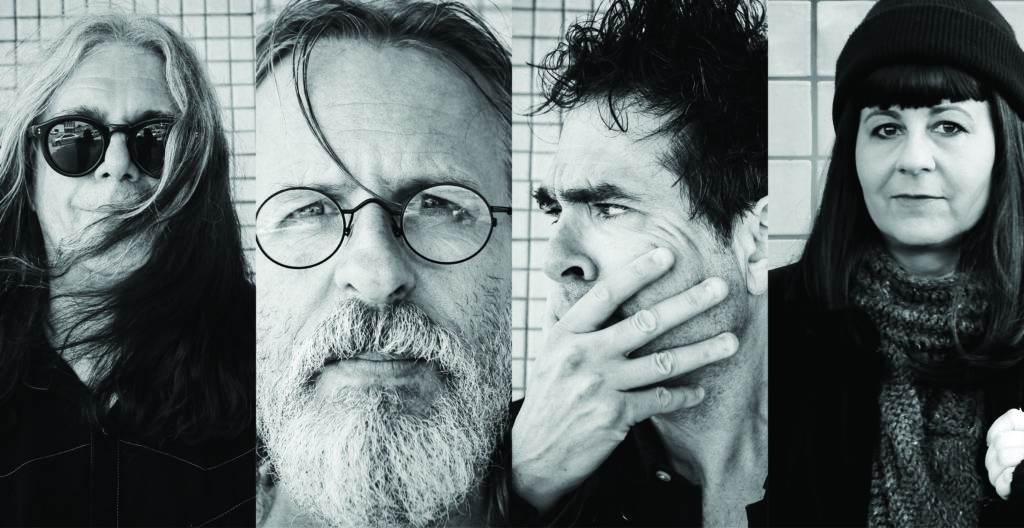 John Spencer and the Hitmakers play Zanzabar Derby Night, May 7.

Interviews these days are an adventure. Because of the pandemic more folks work at home including myself and that presents all sorts of fun variables. Loud kids, loud pets, weird internet, and because I live on a hill, every so often someone that I interview gets the privilege of an echo. When I called to interview Jon Spencer, his echo was waiting excitedly to help him through the interview. A fun introduction to an artist who is used to avant-garde happenings. So let’s consider this an avant-garde interview.

Jon Spencer was on tour with his latest band the Hitmakers in April when he was stricken with COVID. After canceling a few dates, Spencer and the band are back on the road with Quasi, a project of band members drummer Janet Weiss and synth player Sam Coomes. Spencer and the Hitmakers will be making their stop in Louisville on Derby night, May 7, at Zanzabar.

Here’s our chat with Jon Spencer where we discuss the tour but also how to deal with the trials of COVID and the seeming lack of basic human decency.

Jon Spencer: How are you today?

LEO: I’m good, good. How are you feeling?

You know, there’s been better times. Still trying to get over…I got COVID earlier in the tour and I’m still not quite 100%. And as you can hear, my throat’s all tore up.

Sure. And, and, and if you’re a band on tour yeah. And you’re playing in a room with, you know, a bunch of people in the room that aren’t wearing masks. It’s no wonder that I got sick and so many other tour musicians get sick. Having to cancel shows, having to cancel tours. We need to look out for each other. Wear a mask.

I agree but venues are trying to mediate for business sake.

I just don’t understand what happened to just common courtesy. Why wouldn’t you want to help out your neighbor?

I get it. I still wear a mask in public.

It will be interesting to see, um, you know, moving forward in the years to come. There are some countries where people are always wearing masks right.

It’s just so, it’s so dumb. I don’t, I don’t know. The selfishness and the stupidity just drives me up the wall. I don’t know what the answer is. I don’t think it’s about religion. I think there needs to be…education, of course is important. We need to pay our teachers, but also, maybe something like a year of  community service when you’re 18 or something. Something which forces people, or would help maybe open people’s eyes that like, ‘Well, I’m not just, you know, alone with my TV or, like, phone and that I’m a part of the community.’

Well, Americans are gonna wanna incentivize, you know, like if we do it, but what are we gonna get out of it? That’s the American, you know?

Again, I don’t think it’s about religion. I think people would want to help out and look after each other without some fear of punishment from God.

So the Blues Explosion’s last record came out in 2015, and we toured a bunch. Then somebody in the band got sick, and that person can’t do that kind of work anymore. They can’t play in a rock and roll band and tour and travel around. The Blues Explosion is very much a combination of the three individuals, very much a collaboration. It wouldn’t do to make any substitution. That was, in fact, the end of that band. So, I was moping about and feeling sorry for myself and definitely missed being in a band. The first Hitmakers record, although it is only credited to John Spencer, Spencer Sings the Hits is the name of the album. That was made in 2017 and came out in 2018.

And that was my attempt to jumpstart a new project and get a new band going, and the people I tapped for the record were Sam Coomes, who people are familiar with his work with Elliot Smith, Heatmiser, The Donner Party and Quasi, and then, uh, a fantastic drummer guy named M. Sord.

We made that record, and in 2018, we started touring. I wanted somebody to fill out the sound on the record. There was a lot of metal percussion. So I reached out to my older friend, Bob Bert, who played in Pussy Galore with me back in the ‘80s. And, so that became the Hitmakers, Bob, Sam, Sord and myself. So we tour it all over the world and play many shows throughout 2016 to 2019. And this new album Spencer Gets it Lit was  supposed to be recorded in the spring of 2020, but, you know, the virus came calling, then we had to change plans.

Tell me about the new record

The new record Spencer Gets It Lit, I think really benefited from all of the shows we played together. Touring and playing night after night, really built up our muscles and, and gained wisdom, you know, with every show and developing the language between us. You know, we know how to interact and connect musically.  That just comes with time, and it shows.

You’ve described the music as constructivist pop. Can you tell me what that means?

I think because maybe, the band and the songs play with different genres at times kind of turn things inside out, but it’s, at heart, there’s always sort of a basic traditional format. There is a pretty standard pop song format: verse, chorus, verse, chorus,  bridge, solo…that kinda thing.

What did you do during the last two years of COVID? Did you create more or less?

I just stopped… shut down. I wasn’t very creative. I just was trying to get through it and look after my family.

One last question, I’ve seen the term ‘uninhibited’ used to describe your performance. Do you feel more or less inhibited these days?

That’s a good question. I’ve sort of been struggling so far on this tour. It’s, I think, not having played a show in two and a half years and coming back to it, It’s been very strange. Some of the stuff just comes back. It’s sort of muscle memory, but some things it’s like, ‘Oh.” Two and a half years especially for someone in their late 50s. That’s a big difference, you know? The bigger part of it is that  it’s just so strange to be touring now during a pandemic.

Playing shows and looking out and seeing a crowd of unmasked people, which, those first few days in this tour, just waiting, thinking like, ‘OK,’  It’s like an anvil or a piano hanging over your head, just waiting for it to drop and I got sick.

It’s just such a weird time. I don’t really know how this is supposed to work. It’s caused me to question a lot of things…

As far as the uninhibited part, I’m still trying to do my best, and the Hitmakers are still trying to put on a great rock and roll show. And, that’s really what I’m after. I’m trying to just create a moment where me, the band, the crowd, everybody, we can just lose ourselves and escape from ourselves for a period of time. That’s really the best.