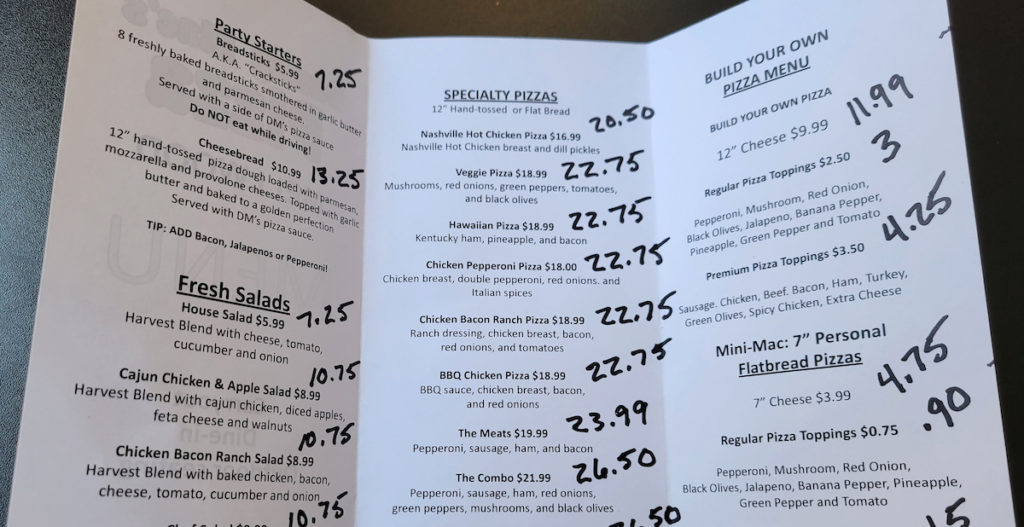 Dan McMahon's marked-up menu on which he reluctantly planned an across-the-board price increase for Danny Mac's Pizza. (Some of the final increases were a little less.)

Dan McMahon sat with a Sharpie and an extra copy of his restaurant’s trifold menu and pondered a difficult decision.

McMahon, general manager of Danny Mac’s Pizza in the Mellwood Art Center, knew he would have to raise prices. With grocery prices rising fast, gasoline prices topping $4 a gallon locally, and inflation in the United States hitting the highest levels seen in decades, that was a done deal.

“We just went through all of our invoices and found out that lots of our business supplies went up about 20% in the last month,” he said. “All food and packing supplies went up. Twenty percent can put you out of business fast if you don’t change your prices.”

Pondering, worrying, McMahon worked through each column – starters and salads, specialty pizzas and build-your-own pizzas – trying to hit the sweet spot that would cover his costs without kicking up consumer resistance.

He made a couple of tweaks at the end, rounding the top-end pizzas down to a penny under $26. But overall, Dan and his Sharpie boosted each of the 22 menu items by roughly 20%.

“I had to choose between keeping the quality or downgrading our product,” he said. “I decided to keep our quality where it is and hope our customers understand that we can’t control the supply costs and we have to raise our menu prices. It’s very stressful. Hope it turns out well. Scary stuff!”

McMahon is exceptionally open about his inflation journey. But it’s no secret that a combination of increasing prices for food and supplies, worker shortages and growing wage expectations, and costs for takeout and delivery supplies and services has the industry in a tightening vise.

To get a sense of where local restaurant prices are headed beyond my conversation with McMahon, I took a look back at menu prices at several pricey eateries (and a couple of affordable ones) to get a picture of what’s happening with menu prices. You probably won’t be surprised to learn that the trend is up.

It’s a tough situation out there, and it’s not getting better. Here’s a random look at how prices have change at a few upscale local spots, listed alphabetically, with one not-so-upscale dining room at the end.

During my last review visit, in October 2015, nine main courses ranged in price from $23 (for wild-mushroom pasta) to $41 (for grilled filet mignon). The menu currently on 211’s website ranges from $29 (for a similar pasta dish, garganelli pasta with local mushrooms) to $44 (for Creekstone Farms filet mignon).

It’s been a while since I enjoyed the lavish pleasures of the multi-course prix fixe dinner at 610. Back in 2010, when the economy was gradually pulling out of the Great Recession you could get by with a three-course dinner for $50 or a four-course repast for $60, not including wine.  Ten years later, the five-course tasting menu is up to $110, with another $65 for a wine-pairing option.

Four years ago at Anoosh Bistro the 18-entree bill of fare ranged from $19 (for what may have been the city’s most expensive hamburger) to $42 (for an 8-ounce grilled beef tenderloin). Now, if you pass on the $85 three-course prix fixe dinner, entrees start at $38 (for any of three really impressive looking vegetarian entrees) to $63 (for several options at the upper end).

At the end of 2016, entrees here were $16 (for a Kentucky Black Hawk Farms double cheeseburger) to $29 (for either a seared New York strip or seared scallops). A four-course chef’s tasting menu was $45 per person. Now the smashed double cheeseburger is $18, and garlic and herb marinated lamb chops top the bill of fare at $52.

It’s been four years since I last reviewed Porcini. At that time, main-course prices ranged from $24 (for chicken Marsala) to $39 (for lamb chops or a grilled veal chop). Chicken with the marsala treatment is now $30, and a beef tenderloin fillet with gnocchi is $46.

Seviche restaurant is a favorite, and that’s why it was one of the first places I went for a sit-down dinner after COVID vaccinations arrived. In April 2021, the trademark seviches were $15 to $19, and the entrees were priced from $21 to $39. A year later, seviches are $17 to $19, and entrees range from $25 (for mahi mahi tacos) to $43 (for sea scallops or wild-caught grouper).

Another of my favorite local eateries, Volare, listed eight main dishes (“piatto principale”) from $20 to $46 during my 2017 visit. Now the range extends from $29 (for any of four Italian standards with the choice of chicken over more pricey veal) to $48 (for osso buco in red wine).

Looking for great cheap eats? It’s hard to beat Burger Girl and its siblings Burger Boy and Hillcrest Tavern. When I brunched at Burger Girl in 2019, I reported that only two of the 20 breakfast options cost more than $10, and the bill of fare topped out at $13.99 for rib eye steak with three eggs. Burgers in 10 variations were $7.99 to $13.99 (for the bison Burger Girl combo with fries and a soft drink). Now, a few more items have moved past the $10 barrier, and that ribeye-and-eggs feast is $15. But here’s good news to leave you with: That Bison Burger Girl Combo has gone up only a penny. It’s $14.