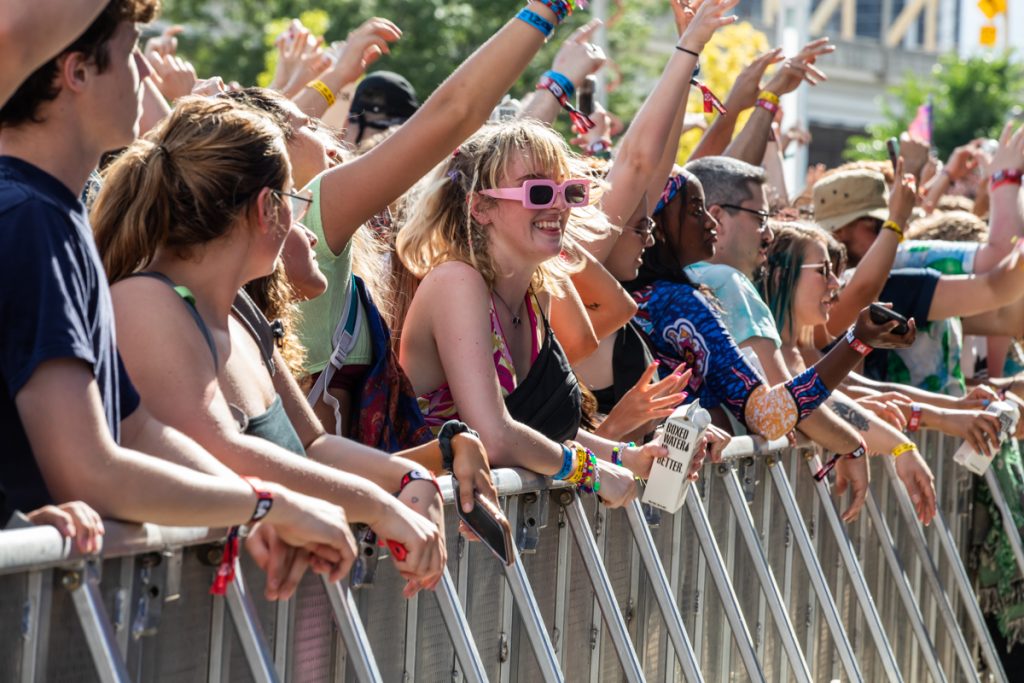 LEO sent four writers to Forecastle, which returned to Waterfront Park over Memorial Day weekend. Here are their thoughts about the music festival:

Sarah Kinbar: Honest thoughts about Jack Harlow’s Forecastle performance coalesce while I sleep. In my dream, Clairo, Tyler, the Creator and Jack Harlow are hanging out in the wings while Tame Impala performs on the Mast Stage. Unintimidated by their colleague Kevin Parker, Clairo and Tyler take occasional breaks from listening to discuss the magic in play, making thoughtful assessments about the sound, the set, the lighting. The conversation gets intellectual.

Harlow has little to say. He’s beyond exhausted. His brains are crumpled into a ball and tucked away in the recesses of that curly-mopped noggin. Having performed almost a dozen times in as many days leading up to the festival, he’s on auto-pilot.

The level of performance at Forecastle topped out with Clairo, Tame Impala, and Tyler, the Creator. Masterfully orchestrating the vibes, all three dominated the stage not so much with volume as with deliberate creative energy. Conversely, you can imagine Harlow reciting his daily affirmation prior to performing.

Just be cute. Just be charming. Remember, the fans love you. You can do no wrong. It’s okay that you’re not a good dancer.

Last year, I saw Harlow in St. Petersburg, Florida, on the Crème de la Crème tour. There, Harlow displayed much of what we saw at Forecastle: awkward movements on stage, neediness for the crowd’s affirmation, skipping lines from verses here and there. It was all a little bit lazy. In Louisville, he added an extra layer. When in doubt, he got louder. There was a lot of yelling. Festival videos on YouTube and Instagram Reels will confirm that somewhere in Harlow’s mind, louder means better.

Here’s what LEO Weekly said about Harlow in our 9 Forecastle Sets We’re Most Excited to Catch this Year preview: “He’s got a smooth flow, a respectable braggadocio, a solid portfolio of collabs and the adulation of millions of fans worldwide…” But we made no promises about performance quality. Why? It isn’t there.

Erica: From the humble beginnings of Tyler Park to three big stages at the Waterfront, JK McKnight’s dream is a beautiful thing and it’s something he should be immensely proud about. It is a festival that manages to mix genres in the right way, providing a diverse and inclusive musical experience.

I went each day of the festival, though Friday was not my favorite. The music wasn’t bad, with Clairo and Still Woozy probably the best of what I saw before jetting because the weather was drizzly and somewhat unpleasant. My son enjoyed playing in the rain. He got to wear a poncho so he stayed dry. I didn’t get one.

Saturday’s performances were better and certainly made better by lovely sunshine and comfortable temps. Tai Verdes was a fun crowd pleaser, and relaxing on a blanket watching the scenery and the human flow was an important part of Forecastle life. There were boobies and butts of all ages, shapes, genders and sizes and I wholeheartedly approve. God Bless Dolls Kill for creatively decorating so many derrieres at this weekend’s festival.

The sets by Phoebe Bridgers, 6lack and Tame Impala all were impressive. Tame Impala’s volume seemed really low, and I was disappointed because I wanted to hear “Elephant” at a volume to give me a bellyache. I couldn’t tell if it was low because of the volume controls or the density of bodies. I’m still guessing after Friday’s Harlow volume, Tame Impala was held back a bit.

Sunday, the temps kicked up a notch so arriving a bit later was a good call because once the sun set, the river breeze was the perfect set up for another amazing evening. Dayglow, Black Pumas and Tyler the Creator played solid sets. Every time one of Tyler’s songs ended with the word, ‘bitch.’ I couldn’t help but giggle. It wasn’t misogyny, that ‘bitch’ had no gender assigned, it’s just a funny word to end a lyric and much funnier when it ends several songs. It did not detract from the artist who Tyler is, and from his Odd Future beginnings, he’s come a long way.

This was a good Forecastle — people were happy, smiling, half-naked and trying to cobble together a life outside COVID, even though a few folks did navigate the festival in a mask (raises hand). It was good to have a little togetherness, dancing and singing after the last two years… especially after this past week. The music festival is American culture that I can support.

Aisha Rucker: I have been a social worker for the past 14 years and have worked with people through many challenging transitions of life. What I have found is that no matter the presented issue or concern, the underlying theme is grief. The last two years, we have collectively grieved a life we once knew before COVID. And sadly, have grieved the many lives lost from this illness. More recently, we have experienced some of the most unthinkable murders from gun violence in Buffalo, Southern California and Uvalde. Unfortunately, gun violence is not new in America, but regretfully we often just move on without a resolution further complicating our grief.

Luckily as humans, we can hold many emotions at the same time. Which means grief and joy can coexist. It is often said that joy is the twin of grief. It is like watching “The Color Purple.” That movie will have you experiencing every emotion from anger to joy, but we never stop to question why we are laughing when we think we “should” be sad or angry. So, it is ironic that in our real lives, we try to control or rationalize these emotions. For me and many others, Forecastle came right on time giving us a healthy dose of joy. I believe the most joyous moments came from seeing young people express themselves freely in their desired costumes, with love, dance and body positivity. Hell, I wanted in and even threw on my best festival wear. It was clear that this joy was infectious.

So, as we return to our regular lives, remember to save some room for joy. It is okay to laugh and/or even dance when you are grieving. Together, let us do a better job of caring for one another. If you are struggling, please consider seeking assistance. Life can be hard, but we do not have to go at it alone. Thank you, Forecastle, for creating a safe space for joy to live.

Scott Recker: The most strangely contentious thing about Forecastle every year is its lineup. They release it, and waves of opinions crash shorty after; people both ecstatic and pissed, full of genuine excitement and aloof sarcasm. And this year marked a pretty significant identity shift for the lineup. After a two-year hiatus, Forecastle honed in on today’s brightest hip-hop and electronica stars for its 2022 lineup. Over the weekend, we saw some the greatest voices in music in Tyler, the Creator and Phoebe Bridgers, and also some serotonin-inducing EDM that exists solely to make people have a carefree moment and dance the world away.

This year drew a young crowd, a happy crowd, an engaged crowd — whether it was a dance party on the Boom stage, or a people singing every word to Phoebe’s “Kyoto,” people weren’t just hanging around the outskirts of the stages, they made the sets electric.

Personally, it wasn’t my favorite Forecastle lineup, and that’s alright, it doesn’t matter that much — there are so many festivals out there, it’s hard not too find one that works for you. Music is one of the most subjective things in the world — lineups don’t “suck” or “rule,” they just align with what you like or what you don’t. Tyler, Phoebe, Earl Sweatshirt and Tame Impala all fall into the music I like, but a lot of the DJ sets aren’t something that I personally can connect to.

That said, I did swing by a DJ set on Saturday, and the joy it brings other people is undeniable. I watched a group of friends reconnect after not seeing one another for what seemed like a long time. They were dancing and hugging and trying to catch up with small talk after spotting each other and forming a group. Their happiness was unmistakable. And that’s what matters.

[And, since festivals, in my opinion, are about discovery as much as anything else, I always like to share the act that I had never heard of that blew me away: this year that was beabadoobee, who sound a bit like a dream-pop version of The Breeders. Check them out.]

To see LEO’s photo set from all three days of Forecastle, click here.