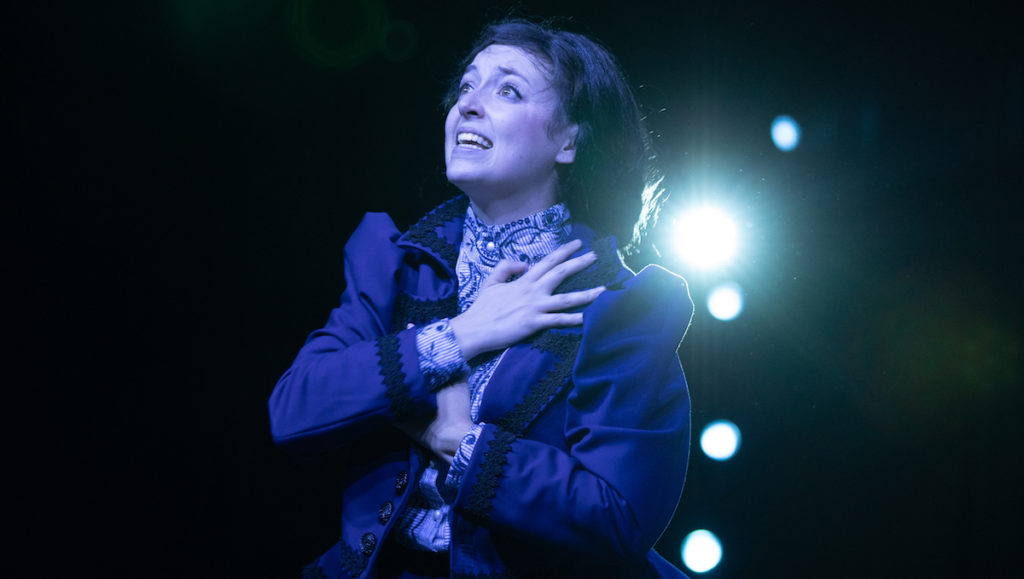 Shakespeare and gender identity have been twisted up and complex since long (LONG!) before English had the phrase, “gender identity.” One example is the tendencey for Shakspeare’s comedic young heroines to don the garb of the opposite sex, often in pursuit of a lover. Usually the assumption, onstage and in the rehearsal room, is that the character in question is a straight cis woman who just happens to wear men’s garb.

But what does it mean when a trans non-binary actor is playing that character? Does it suddenly make that character queer or trans? Well, is gender a construct? Is sex biological? Voof. Go unpack the latter questions with Judith Butler. But for Mollie Murk, the actor playing the dude-duds donning Viola in Kentucky Shakespeare’s upcoming production of “Twelfth Night,” the answer to the first question is a resounding “verily.”

LEO: So you’re playing Viola, who crash lands in Illyria, and disguises herself as a youth named Cesario, and then gets caught up in several romances. Talk to me about how your gender identity changes your approach to the character.
Molly Murk: Playing Viola, who is so openly exploring gender and sexuality in a new world is such an exciting shift for me, somebody who is actually on a gender journey, and has not landed on like, “I AM THIS!” But it’s also really challenging because gender issues are so present in me, in my everyday life. And then bringing that to the stage in a play that’s over 400 years old, has its obstacles.

So, you’ve worked with Kentucky Shakespeare for several years, does that also affect that gender/character matrix?
When I started working here, I was 22 and playing young ingénue characters almost exclusively, and I was seen as a young girl. I had to work so hard to be seen as anything else.

Right? Even in a progressive space, women don’t usually get as many — or any — of the chunky roles, like Othello, Hamlet or Macbeth. Especially not women who are read visually as ‘young girl.’
And that was something that was constantly in my mind all the time. Like, I don’t want to be seen as this. It took me a long time to recognize that feeling as feelings of dysphoria and gender questioning, and being somebody who is not all they way on the cis female side of the spectrum. It took me awhile to recognize it as that, and not just like, feminist rage.

Outside of Cesario’s masculine presentation, what about “Twelfth Night” interests you?
What I love about it is the characters are so messy, and it’s not like these picture-perfect love stories. It paints so many different pictures of what love can look like, and what desire looks like, and what attraction looks like.

And they are all confusing. For the characters.
And that. to me, as a queer person, is the most relatable shit ever. A friend said to me once, ‘nobody teaches you how to be queer.’ A lot of us are walking through this life with very few role models. Because there is no roadmap. There is no clear remedy.

…And that speaks to the messiness of love and gender complexities in the show.
Right! So when Viola calls out, ‘Time, thou must untangle this, not I, it’s too hard a knot for me to untie,’ that tells me something about really where Viola is, and the desperation and kind of the cluelessness, that comes with being in relationships that aren’t clear cut, or have a social reference point.

Can you share, like, another specific moment of the show that speaks to you as an actor, or as an actor portraying Viola?
There’s this moment in the show where Bee [BeeBe Patillo, the actor portraying Olivia, part of the Olivia/ Orsino/ Viola/Cesario/  Sebastian love pentangle] started doing this thing where she takes my arm, in kind of like that very traditional promenade, ‘going for a walk’ way, and I think that’s such a moment of clarity for Viola. Like, ‘I’m on the other side of the arm. She is taking my arm as she would take a man’s arm.’ And I have never been on that side of that pairing before. And being the person who’s walking her downstage, it feels like it fits right. This is a role I am able to play. I feel affirmed by this; I feel seen by this.

And that affects your portrayal?
Then I am able to bring that to the character, because I think that’s truthful for Viola as well. And there’s room for that [in the script]. I think for me what’s been interesting is finding, where is there space for me to bring my queer experiences into this story.

And there’s so much space. Have there been any difficulties?
Matt [Director Matt Wallace] has been supportive of my life experience and identity being brought to this production. In this company, I’d say the majority of the older actors have worked on this show multiple times. And I’m thankful to be in an environment that is encouraging and supporting. But there is a certain kind of fear with bringing up things like, ‘Hey, so, this is how I see this part.’

Yeah, a lot of cis people don’t get that being a queer voice is still scary. Even in a roomful of supportive allies. But it’s so necessary to bring about change in the industry. And to make a really fully formed character in a lot of instances.
And what’s really cool about “Twelfth Night,” at no point in the story does Viola talk about going back. Like, to being seen as a woman. Even when she meets Sebastian again, Orsino still refers to her as Cesario. And what I found is a lovely kind of ‘take me the way I am’ energy in that last scene. Because Viola doesn’t go back to being Cesario. •

Kentucky Shakespeare’s production of “Twelfth Night” runs Tuesday through Sunday May 25 – June 5, with additional performances on July 16, 19, and 22. Performances are held at the C. Douglas Ramey Amphitheater, Central Park, 1340 So. Fourth Street, curtain is 8 p.m., and every performance is free.