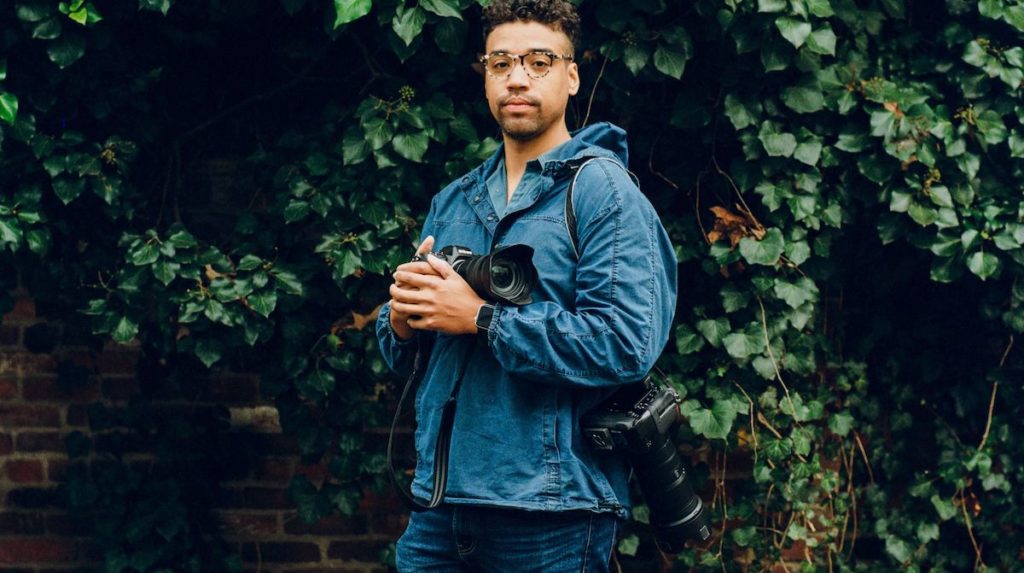 When protests broke out in Louisville in May 2020 over the police killing of Breonna Taylor, Jon Cherry headed downtown with a camera and began his career as a photojournalist. Shooting independently and posting to his Instagram, Cherry quickly became a fixture at protests that summer, often standing out in the crowd with his trademark olive green body armor and orange neck gaiter. His intimate look at the unrest in Louisville soon gained the attention of photo editors and he started getting paid to shoot assignments.

Just months into his news photography career, Cherry was sent to Washington, D.C. by Getty Images to photograph anticipated protests against the outcome of the presidential election on Jan. 6. It was the first time Cherry had done photojournalism outside of Louisville.

On May 9, 2022, Cherry and four other photographers shooting for Getty won the Pulitzer Prize for Breaking News Photography for the images they captured during the riot at the U.S. Capitol. A photo by Cherry showing a seething crowd standing in front of the U.S. Capitol led the package of photos submitted.

LEO caught up with the 32-year-old Louisville photographer after he won journalism’s highest honor. The following interview has been edited for length and clarity.

LEO: Congratulations! Can you tell me about how you found out you won and what your reaction was?

Jon Cherry: I was asleep whenever it was being read. I didn’t know that the awards were being read on the day that it was happening, on Monday. I knew that we had a really strong submission, but a lot of people made amazing photos that day and there were a lot of incredible submissions — and not just for that day, but that year.

I had just gotten done doing a bunch of chores around the house and laid down for a nap on the couch with my dogs. And maybe 15, 20 minutes into that nap I woke up and peeked at my phone and saw it had a ton of missed calls and text messages. At first, I thought: ‘Did something happen? Did something bad happen?’

You see all of the missed calls and it seems like almost it was an emergency. And my sleepy brain definitely thought so. But I started seeing messages about ‘Congratulations, it’s a Pulitzer, this is big.’ And I called up one of the editors at Getty who I worked with on the assignment and I have worked with since then. I called her and asked her what was happening and she said: ‘Jon, we just won the Pulitzer. We won the Pulitzer for our January 6 entry. You won a Pulitzer.’ And I was clearly beside myself. I think I cried for 30 minutes straight after that. Just a blubbering mess. I just stood on my front porch and just looked out and cried.

The photos that won were from January 6, from when rioters stormed the U.S. Capitol. Can you tell me a little bit about that day and that assignment?

January 6 was a day I first read on Parler back in November of 2020, shortly after Donald Trump lost the presidential election. And I became very interested in what was going to happen on that day and what some of these people were saying about it — just a lot of calls for violence.

I pitched it to [Getty] and they shot it down initially. Then come early January 2021, I get an email back from them again saying, ‘Hey, we’re going to need some help on the team, can you come out to D.C. and photograph whatever happens on January 6?’

My partner at the time insisted on coming with me to watch me, to watch my back and make sure that I was safe. So we took off. We hopped in a car and drove to Washington, D.C.

How did you think things were going to play out? Were you prepared for it to be what we saw?

We knew that it was going to be bad. We knew that it was going to be an attack of some kind. Just based off of all the vitriol that had been read online and the attitude of the people who were there when we actually did come. The people that were actually there were prepared for war. We saw multiple firearms that were taken. You could see them with bear mace, baseball bats, clubs, various types of handheld melee weaponry. Axe handles. Everyone’s wearing helmets and bulletproof vests. So it was very obvious.

I was actually very shocked when we showed up and they only had the waist-high bicycle barriers set up around the perimeter of the Capitol. I think at one point we even asked each other, ‘Do they know what’s happening today?’

We’ve spoken before about some of the abuse you faced that day at the Capitol. Are you comfortable talking a little about that?

It was a tough day for all members of the media.

But also, being a person of color in that crowd, I was definitely targeted for a lot of abuse. I was spit on, I was called a lot of names, racial slurs. I was threatened overtly a few times and was grabbed onto a few times.

I was very lucky compared to some other journalists who were there that day. But the mental toll of feeling that you are in danger the entire day — and it’s a very unpredictable type of danger you are in — definitely weighed on me.

This was the first time you did photojournalism outside of Louisville. You were pretty early on in your professional journalism career — can you tell me a little about that trajectory?

So on May 28, 2020, that was the first photojournalistic endeavor I had ever taken. And that was the first night that protests over the killing of Breonna Taylor were happening in Louisville. That night really sparked something within me of already feeling the frustrations and the anger and the fear of seeing these three major killings of Black people, very public killings of Black people — Ahmaud Arbery, George Floyd and Breonna Taylor — and not really feeling that there was much that I could do about it and not really feeling like there was a safe place for me to be and just ignore this pervasive issue that was affecting me and affecting my people.

I decided that was what I was going to do with this ability that I had, this ability to take photos. Very quickly after the protest started a lot of my photos started to gain traction and have kind of an effect. What was happening in Louisville, I thought, was really underreported. I felt like it was a travesty that what was happening here wasn’t something that people were connecting with.

I was unemployed and I was shooting independently. It was very recently I had been laid off from my job. That was my new job now: To go out every single day, photograph the protests and participate in that way.

The first I was ever published was in Time Magazine, that was four days after the protests started. So that was pretty amazing. And it wasn’t until August 11 [2020] that I had my first actual editorial assignment for an outlet.

What do you look for when you’re framing a shot?

Photography is interesting to me because it’s such an extension of life and it’s such a representation of life and it comes with a lot of the challenges of life. So a lot of the time, finding a good frame depends on how good you feel that day. It depends on where your mind is at. Whenever you are in the field photographing, for me at least, my own physical and mental health really contributes to how I frame up shots.

What I look for artistically in the frame — obviously a good subject. Depth is really important, there are a lot of very flat photographs out there that tell great stories, but they don’t pull you into the photo.

I lean on symmetry a lot, especially that day [Jan. 6]. There were so many moments where I didn’t know what to do. It was so overwhelming, there was so much happening, it was either very dangerous or it was scary or it was loud, all of these different distractions. And sometimes the only thing I knew to do was to lean on the symmetry of the building.

What advice would you give to photojournalists who are just starting out?

I would definitely say to follow your heart and keep balance in mind. I have gotten to a point now where I’m definitely a little burnt out — 2021 was my first full year in this profession and I’m so grateful for all the opportunities that I’ve had to go and learn about the world, do the work that I was doing and make photos that hopefully swayed policy and struck peoples’ emotions and made them think a little bit differently about those that are around them.

But at the same time, I also lost a little bit of myself in it as well. I’m so profoundly into producing the image I kind of forgot about my own self image within all that. So I can say that, at least for maybe people of a certain personality type, that it can be very easy to just give yourself all to your work and your craft. Just remember that it’s you, yourself, who you are that makes the images that much more impactful, that much more powerful.

If you’re looking for technical advice: I will say to say yes to most things, do a lot of personal work. Just go around with a camera and shoot as much as you can. Really that’s probably the biggest thing: Take as many photos as you possibly can.