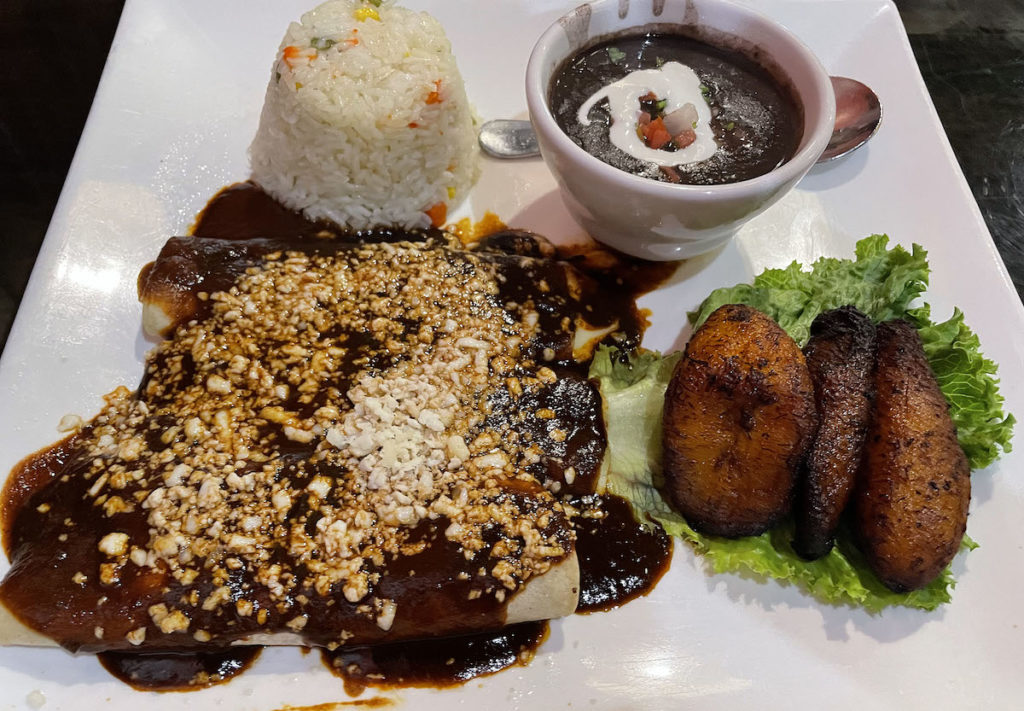 We came to La Cocina de Mamá for enchiladas and ultimately chose the mole style, a seductive blend of chocolate and hot-chocolate flavors and earthy cotija cheese.Photos by Robin Garr

I hate to say that my food cravings are easily influenced from what I see and hear. It’s true, though. All it takes is a tempting phrase in a cooking article, an attractive food photo or a culinary video, and I’ve got to have it right now.

This time it was The New York Times that sent me out looking for Mexican food thanks to a lyrical dissertation, “All Enchiladas Are Perfect. But These Are My Favorite,” in the April 27 edition.

Oh! Yes! I had to have enchiladas, and I needed them right now. I’d been meaning to check La Cocina de Mamá for quite a while, anyway. “Mom’s Cooking,” what could be more lovable than that?

The menu is completely in English except for the names of the dishes, and the servers speak English and Spanish with equal fluency.

The main-dish selection includes about 75 dishes subdivided among chicken, pork, beef, fajitas, enchiladas, quesadillas, seafood, burritos sandwiches and dinner specials; there are also selections of vegetarian and gluten-free meals. Prices in most categories are in the $10 to $15 range, although some seafood dishes move into the upper teens and most of the steak dishes are around $20 to $25. About 15 lunch specials are mostly under $10, a half-dozen desserts are $5.75-$8.99. A children’s menu offers a half-dozen options for those 12 and under for $5.99; and there’s full bar service for the grown-ups.

An estimable order of chips and salsa got our meal off to a good start. Large, bright yellow corn chips were fresh and crisp, and a coarse-textured red salsa with just enough heat to tickle your taste buds made them go down easily.

I was delighted to find four enchilada options on the menu, along with the information that “Enchiladas originated in Mexico, where the practice of rolling tortillas around other food dates back at least to Mayan times.”

A yen for chocolate got in the way and I summoned the mole enchiladas, choosing the cheese enchilada option; it’s also available with pork, chicken or beef.

The thick wave of red chile and dark chocolate sauce that flowed over my three small cheese enchiladas enhanced their flavor, as did the generous pile of grated cotija cheese that formed a snowdrift on top. The rolled tortillas hidden within were tender and light, easy to cut through and pick up a sample of all the flavors in every bite. The mole was distinctly sweet, almost as if it were made with semisweet chocolate rather than the traditional bitter chocolate, but I had no complaints.

This entree came with an order of mild but flavorful white rice formed in a turban shape, green-carrot dice, a cup of thin, savory black bean soup with a swish of crema on top, and three fried plantain slices almost as sweet as ripe bananas.

Three oversize tacos made with doubled corn tortillas were neatly mounted in a metal rack and filled up with generous portions of shredded pork topped with finely chopped red onion and cilantro leaves. Carnitas is twice-cooked pork, first marinated and roasted, then shredded and fried. These bits were a bit dry from frying but quite tasty crisp-fried along the edges and tender within, with good pork flavor.

Sides of yellow-tinted rice and thin refried beans topped with cheese were decent but unmemorable. Tubs of mild red salsa and spicy green salsa gave them a needed boost.

With water to drink and abundant first-rate chips and spicy salsa, our meal for two came to $30.21, plus a $7 tip.