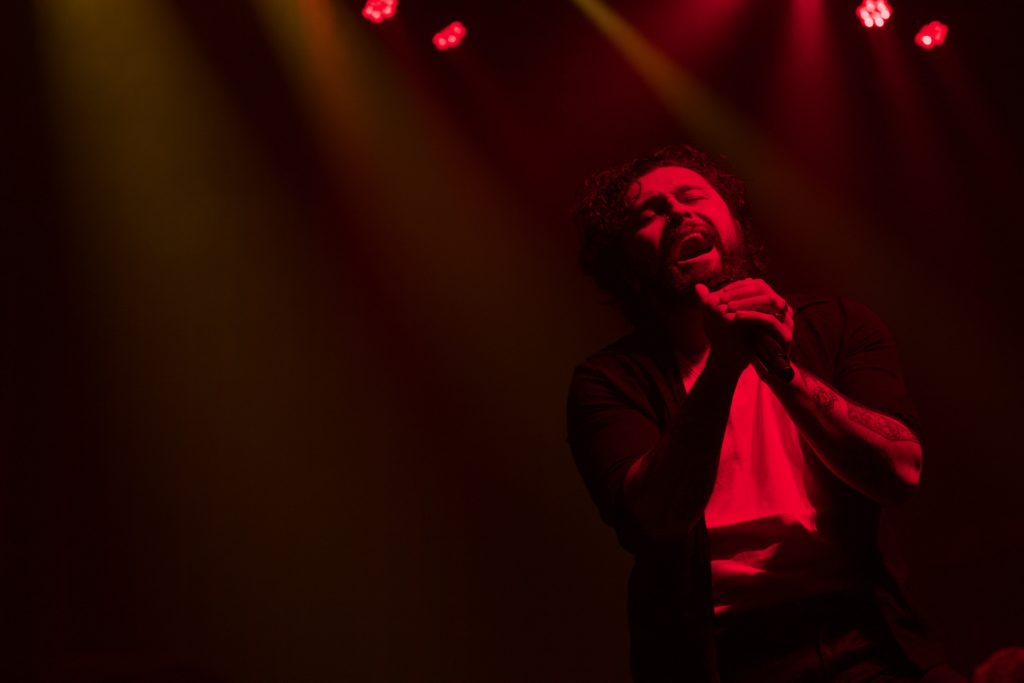 How had I not heard of Gang of Youths until this year? I’m ashamed to admit that I hadn’t heard of them or listened to them until I was preparing for an interview with bassist Max Dunn this month. Despite being a novice to their music, I liked what I heard and was excited to see them live.

When we arrived at Monday’s show at Mercury Ballroom, we came in during the last few songs of artist Tim Lappin, who goes by the moniker Casual Male. He played a set solo with a loop machine and guitar. His songs were well received by the crowd that seemed engaged and interested, though I’m not sure if many knew who he was before the show. His songs were honest and definitely played to the taste of those there for Gang of Youths. As some of the songs ended, it felt as if the artist cut them short, making them feel a bit rushed. Perhaps it was the time crunch of being the opening act.

When Gang of Youths took the stage with the “Angel of 8th Ave.,” the audience pressed forward, matching the high energy of lead singer David Le’aupepe. As he wiggled his hips and flirted with the crowd, the audience did the same. Le’aupepe is definitely the center of attention during the Gang of Youths’ set. It’s difficult to take one’s eyes off of him for fear that you might miss one of his looks, winks or smiles. He was the perfect frontman, at one point jumping into the crowd and hugging people in the audience. I’d read that he wants everyone to feel seen, and if you didn’t feel seen at this show, you weren’t paying attention.

The show really hit its stride during its third song, “The Heart is a Muscle.” It felt like suddenly, we were all in the experience together. As I wound my way through the crowd taking photos, this part of the set really felt electric and it was the moment where I plugged in completely.

The members of Gang of Youths are a diverse bunch and a few times during the show Le’aupepe mentioned that all types of people are welcome. The local crowd was not as diverse, but Louisville is still finding its way to crowd diversity at rock shows. It’s an important sentiment, though because, as my sister and I grew up in the minority at rock shows but being dedicated fans, we realize that it’s a space that needs and deserves more color. I’m glad Le’aupepe recognized and mentioned it.

The band members all seem to play multiple instruments and moved about the stage playing various things and dancing or firing off some high kicks when the mood would strike.

During the song “Brothers,” Le’aupepe played the keyboard, but about halfway into the song, the keys died, and he finished the song almost fully a capella with the audience singing along until a couple of band members, guitarist Jung Kim and finely-dressed, jack-of-all instruments Tom Hobden, joined to help him finish the song. It was a tender exchange and it was nice to see the audience join in, turning a mishap into a serendipitous opportunity.

Afterward, the energy kicked back up with “Forbearance,” a song that fits right into the U2 comparisons that often come their way. There is something Bono about Le’aupepe’s voice and the pace of some of their songs that it is inevitable but it is a well deserved comparison because they can pull the same deep feelings that U2 has done successfully for more than 40 years.

My favorite song, and I think the pinnacle of the band’s performance was the song, “The Deepest Sighs, the Frankest Shadows.” It showcased the band, I think, at its most cohesive and energetic, and I think it was the moment of final buy-in for any newcomers. If you were in the audience and you went on the journey through this song, you came out better for it on the other side.

At the end, the band did a brief encore with the urgent but sexy, “Let Me Down Easy.” The song moves like a dare, with the importance of the dalliances of one’s late 20s and the wisdom of age that wants to return to those years, “You wanted to fight for a cause? Then go out and fall in love.”

Challenge accepted. I can’t wait to see this band live again. This was a pretty magical show.