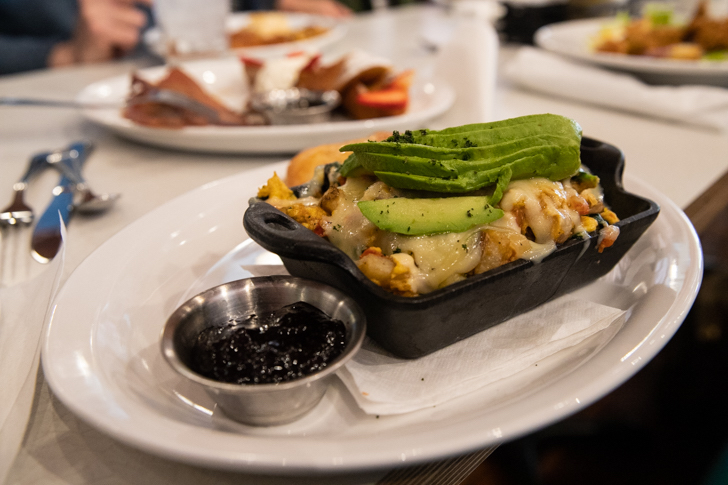 The Yard Work skillet dish offers scrambled eggs, cheese and avocado atop a bed of sauteed veggies and herbs. It comes with your choice of bread or Big Bad Breakfast's fluffy black-pepper buttermilk biscuit.Photo by Carolyn Brown

After Lynn’s Paradise Cafe closed abruptly in 2013, it left a vacant building and a crowd of nearby merchants sad over the loss of a neighborhood commercial anchor.

Martin’s Bar-B-Que Joint filled the space for a couple of years, but soon became a victim of the pandemic.

It took another year for the latest occupant to fill the space again. Big Bad Breakfast looks like a good fit, though. Like Lynn’s, the new entry — the first Kentucky location of a small but growing chain based in Oxford, Mississippi – offers hearty breakfast and lunch dishes in a downhome setting.

Like Lynn’s at its peak, Big Bad Breakfast appears to be drawing a happy, noisy crowd that craves breakfast from morning through midday. It’s filling those seats in the face of plenty of competition, too.

After all, Louisville loves breakfast, and probably always has. We’ve got dozens of eateries that focus on the morning meal. You want breakfast? We’ve got breakfast. You’ve probably got your favorites… me too! But there’s always room for more, and Big Bad Breakfast nicely fills the space that once was Lynn’s.

The wacky decor, ugly lamps and offbeat antiques that gave Lynn’s its characteristic personality are gone, replaced by a generic faux-Southern look with funny slogans, folk-art drawings of farm animals, and a wall-size mural of Louisville celebrities posed in a black-and-white parody of Sgt. Pepper’s Lonely Hearts Club Band.

The chain’s founder, chef and cookbook author John Currence, who grew up and earned his cooking spurs in New Orleans, won the James Beard Award for Best Chef South in 2009 at his City Grocery in Oxford. He founded Big Bad Breakfast (let’s call it BBB) there in 2010, and the chain has expanded slowly across five Southern states. Louisville’s outpost opened in February as the chain’s 10th property.

We stopped by for lunch the other day and enjoyed a bountiful meal and first-rate service in a clean, bright and happily-noisy scene.

The menu offers some three dozen brunch standards, all available throughout the 7 a.m.-2:30 p.m. operating hours, so you’re welcome to enjoy breakfast for lunch, lunch for breakfast, or both. It’s subdivided among specialties, biscuit dishes, egg dishes and omelets, skillet dishes, pancakes and waffles, sandwiches and wraps, and low-calorie lean plates. Just about all the entree options are priced between $10 and $16.

The Huevos Rancheros grit bowl ($13.50) caught my eye. Two perfectly football-shaped soft eggs showed some serious poaching skills from the kitchen. They were built into a fancy preparation that hinted at the flavors of Mexico with a spiciness that didn’t whack your taste buds with hellish fire.

The excellent eggs perched atop a spoonful of black beans and pool of cheesy, soupy very smooth grits, billed as Weisenberger Mills’ finest, but more finely ground than I expected. Dark green salsa verde, diced tomatoes and spicy pico de gallo surrounded the eggs, and the dish was topped with pale tan crunchies that looked like shoestring potatoes but were actually crisp-fried tortilla strips. A sliced half of an avocado and a spicy chicken sausage, halved lengthwise, flanked the plate.

The Yard Work Skillet ($11) is one of the few vegetarian dishes on the menu, although our server said just about any dish can have its animal protein removed upon request. Presented in a rectangular black-iron serving dish, it was basically an egg-and-cheese casserole baked atop a bed of sautéed veggies that became enveloped as the white cheese and egg melted into diced tomato, green pepper, onions and mushrooms as the dish cooked. It wasn’t the most exciting dish ever, frankly, but it felt reasonably healthy, and the sliced half-avocado on top made a pleasant treat.

The Yard Bird comes with your choice of white or wheat bread or a black-pepper buttermilk biscuit ($2 as an a la carte side). Naturally, I summoned the biscuit, and it was a good one: Huge and square and a good inch thick, it was moist and slightly tangy, with a whiff of black pepper, a coarse crumb and a thick, brown top crust.

Another side, a crispy hash cake ($3.50) came in a generous portion — two large triangles — and I could have eaten more. Finely grated potatoes that almost melted into a mash were fried to a very dark, delightfully crisp golden brown that surrounded a steaming, creamy interior.

With an excellent latte served in a coffee mug ($4.25), a hearty lunch for two came to $34.19, plus an $8 tip for our friendly and efficient server, Dominique.