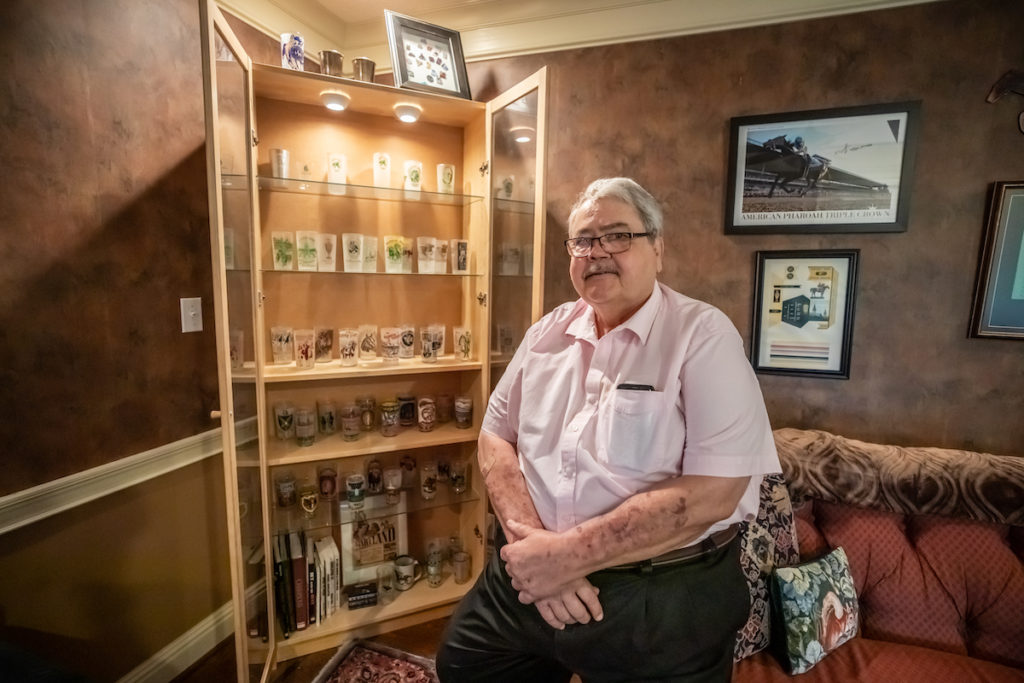 Mike Chandler in front of his collection of Kentucky Derby glasses.Photos by Kathryn Harrington

Editor’s Note: This story was reported in early 2020 for Louisville Magazine’s Derby issue. However, with the onset of the COVID-19 pandemic, that issue never ran and the story got lost in the wind. It is being published by LEO Weekly with Louisville Magazine’s blessing. Minor updates regarding time references have been made. Chandler tells LEO his glass collection remains the same and that he is still missing the four rarest Derby glasses.

When Mike Chandler’s father-in-law dragged him to an estate sale at a wealthy Highlands residence in 1990, he wasn’t planning on buying anything. But then he saw it: a mint julep glass from the 75th running of the Kentucky Derby in 1949. The glass depicted Matt Winn, the president of Churchill Downs at the time of the anniversary, who had attended every single Derby. “He has seen them all” was written in green letters under Winn’s picture. Chandler knew he had to have it.

“I saw that glass, and it just caught my eye,” says Chandler, who has rarely missed a Derby since attending his first as a 16-year-old with a $3 infield ticket in 1971. “It spoke to me.”

Chandler was hooked. After his first purchase, he started hitting antique stores and yard sales looking for more glasses. He started doing research on them and bought books that listed their values so he’d know which ones to go after.

Three decades and about $10,000 later, he has a formidable collection of early Kentucky Derby mint julep glasses, missing only the four rarest (and most expensive) ones from the 1930s and ‘40s. In the corner of the TV room where he watches football and horse racing in his Cherokee Gardens home, dozens are kept in a display case with the oldest and most prized glasses on the top shelf, right under a set of lights. Chandler has more in four or five boxes in the attic, but he doesn’t display anything from the last 45 years as those are too common.

Since picking up that first glass in the Highlands, he estimates he’s purchased over 1,000 more. Not all of those were necessarily to boost his collection, though: Many were bulk purchases of more recent glasses he’d use to hold mint juleps at Derby parties he’d host on the rare occasions that he wasn’t able to make it home to Louisville for Derby over the decades he was living in the Philadelphia area.

“I had a recipe I got from Churchill Downs,” he says. “It was elaborate. You’d have to chill the sugar syrup and the mint overnight and then serve them the next day.”

But while Chandler was dedicated to giving his guests an authentic mint julep, his own love of the glasses never extended to the boozy beverage.

“I’m not a big julep fan,” he says. “What I would do is, I’d take that crushed mint and sugar water and throw it away and just drink the bourbon.”

Still, for tradition’s sake, he usually gets one at Derby.

After Chandler retired and moved home to Louisville several years ago, his collection made it onto his resume when he applied for a job as a tour guide at the Kentucky Derby Museum. He listed the collection right in the middle, under experience.

“I think they are a huge part of the history of the Derby,” he says. “It’s just a huge symbol of the Derby itself.”

The Derby glass first appeared in 1938, conceptualized by Harry M. Stevens, the British-born food concessionaire who is credited with creating and marketing the hot dog (which he originally called dachshund dogs, but that’s another story). The glasses were, of course, another way to squeeze money out of spectators and give fans something to commemorate their visit with. But they addressed a very real problem the track was facing: people were stealing water glasses from Churchill Downs to bring home as souvenirs.

The early years of the Derby glasses were turbulent, going through a number of different permutations before settling on a shape, size and material.

The earliest julep glass Chandler has is an aluminum tumbler from 1940, which was produced alongside a glass glass that year. After buying it in an online auction, he noticed that it must have been used as a flower vase by a previous owner as the vessel had a water mark inside of it. Thankfully, it scrubbed off easily enough.

Chandler’s favorite glass in his collection is a 1945 shot glass that was sold only at Churchill Downs cigar stands. It was one of three different Derby glasses made for the 1945 Derby and also represents a Derby that almost didn’t happen; horse racing was banned by the federal government in early 1945 due to strains caused by World War II. That ban was lifted after Nazi Germany surrendered in May and Derby organizers hustled to hold a race in June.

“If Germany hadn’t surrendered, there wouldn’t have been a Derby,” says Chandler.

In the 1950s, Derby glasses started taking on a more familiar and uniform look, listing previous winners on the back and looking more like the glasses you see for sale at Kroger every year.

But listing winners would lead to chaos following Dancer’s Image’s post-race disqualification in the 1968 Derby and the subsequent years of legal battles. In 1969, no winner was listed — and for several years to follow, there were asterisks and notes about the winner being disputed.

“It’s those kinds of little details that make these glasses special and drive up prices,” says Jessica Whitehead, curator of collections at the Kentucky Derby Museum, as she uses gloves to pick up some of the rarest glasses in her office below the museum’s exhibits. “And for us, the historic value of these, because they record something bigger than just the design that was chosen to be featured that year.”

The rarest glasses can be hard to obtain, even for those actively seeking them out.

“You know, I always thought I was going to walk into a garage sale and stumble across a great one at a low price. That’s never happened,” says Chandler. “I’m sure it’s happened to other people who must be luckier than me. But most people are smart: they know they’re worth something.”

Without much luck at garage sales, much of Chandler’s collection comes from pricier estate sales and online auctions where, like in the Derby, the action comes in the last minute and can often be fiercely competitive. Online auctions can be expensive, but you can find what you’re looking for. Often, Chandler would try to make his major glass purchases when the racing gods had padded his wallet.

“If I had a real good day at the track betting-wise I’d usually buy one soon thereafter,” he says.

A friend of a friend once offered to sell him a complete set of Derby glasses for $22,000 — a fair price, Chandler says — but he decided he wanted to build his collection one by one.

The rarest glasses can cost thousands of dollars.

Chandler came close to buying one of the World War II-era cups one time during an eBay auction, bidding $1,800 before asking the seller to show him the other side of the glass. When a photo arrived showing a crack in its backside, he withdrew.

He’s only had one glass break in his care — a few years ago when his grandson was reaching up into the display case and knocked one from the 1960s over. He says it was probably worth about $100, so he replaced it pretty quickly.

It’s been some years since he’s last purchased a glass, but Chandler hopes to acquire the ones he’s still missing. The next one in his sights is the plastic World War II-era cup. He’ll probably buy it online, but he’s still holding out hope he’ll find one in the wild one day.

“That’s the one I think I’m going to walk into someone’s yard sale one day and see it,” he says.