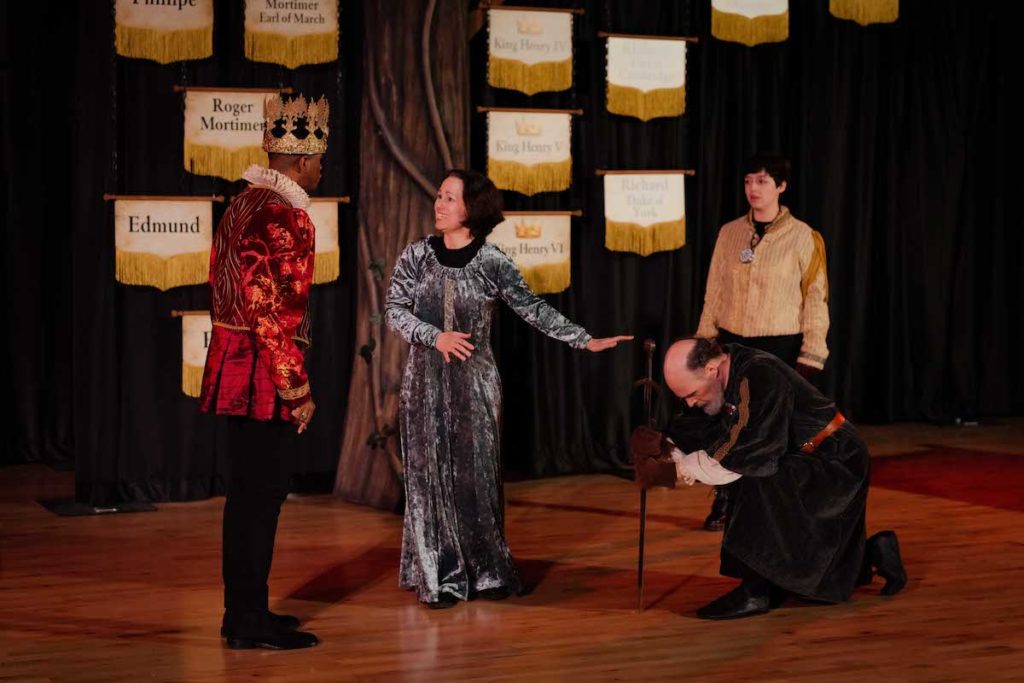 I was surprised (and slightly embarrassed at my ignorance) to learn recently that across its six decade history Kentucky Shakespeare has never produced Shakespeare’s three part “Henry VI” cycle. That’s an oversight that ought to be remedied.

And to be clear, Stephanie Shine’s adaptation, which opened last weekend at the company’s impressive new headquarters, does fill that gap.

Shine’s version, “Henry VI: The Wars of the Roses,” has its own distinctive merits, but it’s a completely different creature from Shakespeare’s sprawling epic.

There is a longstanding argument among some Shakespeare scholars that the “Henry VI” cycle is lower in quality than other parts of the Shakespeare canon (and there are definitely pages in my copies where the footnotes are more entertaining than the spoken lines on the page). But that argument is also much disputed, and nearly any time you see Shakespeare on a stage you can be sure that the script has been edited for length and clarity (and even, sometimes, for ideological reasons).

But if you leave all the scholarly debates aside and just focus on the three parts of the “Henry VI cycle” as dramatic storytelling what you find is a potent theatrical account of a period that is powerfully and disturbingly relevant to our own time. The cycle opens with the untimely death of Henry V, who has just led his ascendant nation to a great triumph in France. And in the wake of that they cover a fraught period during which the kingdom he leaves behind is unraveling, its domestic institutions and foreign interests under such enormous internal partisan pressure and external threats that it often seems on the brink of becoming a failed state.

The plays that chronicle this period are filled with vivid stories of self-sacrificing valor, self-serving venality, sexual intrigue and violence in back rooms and battlefields.

And this English epoch is shaped by the dynastic politics of the War of the Roses and a ferocious battle over what constitutes a legitimate government.  The red and white blossoms that represent the contending sides in that battle can easily be construed as prototypes for the red and blue bumper stickers and campaign buttons that symbolize our own political factions.

Across the Channel, in France, the militant religious fervor of Joan of Arc is a defining feature of the era. Meanwhile, in England a figure named Jack Cade leads a populist revolt against government corruption and taxes – revolt that culminates in a violent, murderous invasion of London.

And just to show the extent to which this era foreshadows ours, here are some words that Shakespeare puts in Cade’s mouth regarding the topic of state-sponsored education: “Thou hast most traitorously corrupted the youth of the realm in erecting a grammar school; and whereas, before, our forefathers had no other books but the score and the tally, thou hast caused printing to be used…”

Anyway, that’s my summary argument for presenting all three parts of “Henry VI.”

But let’s move on to the actual production under review.

Shine’s adaptation could be glibly likened to the satirical work of the Reduced Shakespeare Company, which offers a fun, if sophomoric, compressed version of the entire canon with three performers in a single evening’s entertainment.

Similar tactics are at play here:  a cast of eight shape-shifting performers and rapid jump-shifts in the action. But Shine’s adaptation and Amy Attaway’s staging have a much more serious sense of purpose. The goal here – largely achieved – is to cover a lot of ground and at a minimum convey the force and power of the contending ideas and forces that shaped the period.

And whatever the tactics sacrifice in gravitas they make up in urgency and pace. It takes a virtuosic ensemble with plenty of wit and craft to pull this off, and KY Shakes has plenty of that, both on- and back-stage.

In the audience, you might feel (as I did) that you’re watching a revolving door spinning characters on and off the stage as actors come and go in a stream of different guises. But the players are deft in movement, fluent in tongue, efficient when called upon for quick cameos and rich when given the space to build their characters. And most of them have worked together and with Attaway long and hard enough that they play together like a virtuoso jazz ensemble, even as they shift their instruments from character to character. (If you know the plays and want to see the full list of cast assignments, see the program on the KY Shakes website).

Though the compression and the pace of the production are unlike the original work, the end result ironically reveals the lack of authorial judgment that is so fundamental to Shakespeare’s depictions of character, but are so often weighted with judgment by directors’ and actors’ choices. In general, all of Shakespeare’s characters are protagonists in their own story, until our perceptions turn them into something else. And in general this production is a vivid illustration of that point.

If you’re following roses, the White roses belong to the Yorks (of whom the most famous character in our pop culture is Richard III). In this production the Yorks are led by David Hussey (a relative newcomer to the company) in a compelling portrayal of the Duke of York, who argues that he has a true claim to the throne.  And if you were fortunate enough to have seen Neill Robertson as Richard II a few years ago, you will be intrigued to learn that in this production he plays not only Shakespeare’s satirized version of the rebellious Jack Cade, but offers a preview of the role he’ll play this summer: Richard III. And that alone is reason enough to see this production, if you can get a seat).

Mollie Murk is a fervent happy warrior as Joan of Arc (and equally fervent as an ally of the Yorks). BeeBee Patillo is a notably strong presence in alliance with Henry as Somerset. And Jon Huffman – always a crafty presence on stage – is especially adroit here, as he plays characters on both sides of the conflict: Henry’s ally, the thoughtful Exeter; and Edward of York.