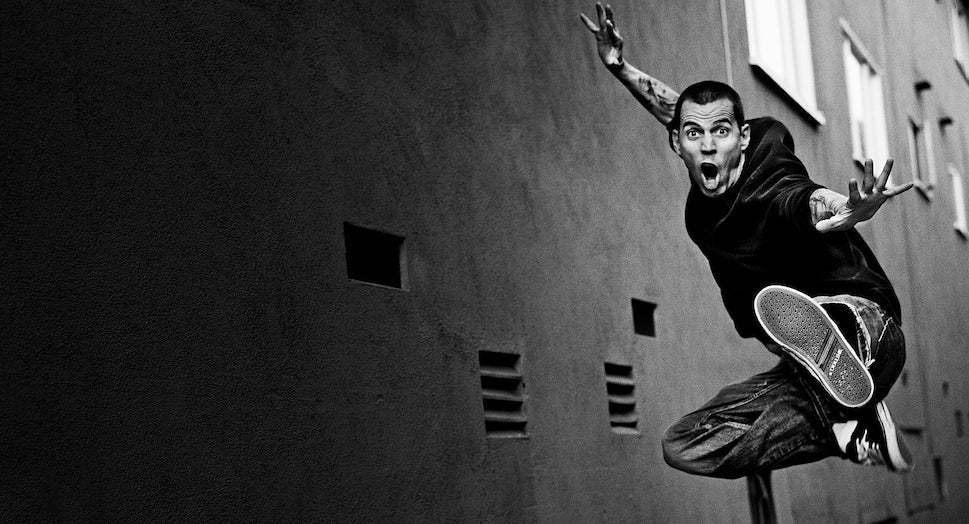 Steve-O has done a lot of living. Not all of his decisions is he proud of, but he certainly understands the color his antics as a member of the “Jackass” crew, and other experiences, have given to his life. He’s nearing 48 years old, and the idea of time has completely changed for Steve-O. Once, he didn’t think he’d live long enough to see 30, and now, as he is growing into middle-age as a man who made his name with youthful risk-taking, he’s got new goals and is working furiously towards them.

On April 24, Steve-O will bring his storytelling/comedy show to the Bomhard Theater at The Kentucky Center. He will share his continued quest for the outrageous and other tales about his life and relationships. LEO caught up with him for a phone call recently. Steve-O was reflective and thoughtful as he spoke about the career of his past and the one he is forging for his future. Does that mean he’s toned it down? Absolutely fucking not. Now he just has to do it as a fully present person, in middle age, in a committed relationship.

LEO: What has being a ‘Jackass’ taught you about living?

Steve-O: I heard somebody say something about becoming extremely wealthy — and that’s not to suggest that ‘Jackass’ has made me extremely wealthy — but that to become extremely wealthy doesn’t change who you are, it just amplifies who you are. I would say that the notoriety, that ‘Jackass’ afforded me, amplified who I was, and I don’t know if that’s specific to ‘Jackass.’ I think that that would just kind of happen. I think that becoming famous on any level involves inherent growing pains. I think that developing a public profile comes with growing pains, probably for most people, I should say, because if you are a healthy, well adjusted person, then I’m sure you’ll be fine. But, in my case, I was not. I really was not.

I mean, let’s not make it like I was a particularly big deal, but my increased clout, I abused every which way that I possibly could, as far as acting out sexually, and with the drugs and alcohol, and just sort of having a generally, self-important attitude.  It’s been a real moving target, and I point to the, those early days and the growing pains and acting like a, a real douche bag as the beginning of it.

I think I’m more well adjusted. I think, now I would interpret the question… I would say that the short answer for the big picture of it all is, ‘Jackass’ taught me to fend for myself.

I think that it’s safe to say that the powers that be of ‘Jackass’ are not particularly concerned with the success or careers of the individuals involved in it.

We’ve got these new guys and I try to tell the, the new cast members every chance I get that it’s up to them to hustle to make something out of this. Nobody’s going to like lift a finger to bring them opportunities outside of what sort of benefits the ‘Jackass’ machine.

I guess you sort of answered my next question, how is life different now than your younger ‘Jackass’ days?

I’ve been really fortunate to learn from my experience, and I’m so grateful for that. I think that, I owe it all to my process of being in recovery. I really think that being in recovery is… I owe everything to that. I can’t say that enough.

I think that those of us alcoholics and drug addicts, who actually do put in the work and achieve long-term sobriety, we are in such a better position than so many people, because the way I think of it is that with any other disease that you can possibly suffer from, once you’re stricken with it, the best you can hope for is to become as healthy as you were before stricken with it. But, with alcoholism and drug addiction, when we are stricken with it, and we treat it, we somehow become, like, greatly improved versions of ourselves, better than we ever were before. I’m so grateful for that. I can’t even put it into words. It’s really, really remarkable what it’s done for me.

I was making mistakes, going in the wrong direction, and, nowadays I waste virtually zero time. All of my time is like pretty well laser focused on accomplishing goals, which I’ve been very deliberate about setting.

Talk to me then about some of those goals and, then how you made the pivot to comedy and stand up.

Well, it’s really pretty simple and I wouldn’t wanna — at the risk of seeming trivial or one-dimensional — I can say that, at the point when I got clean and sober, it was 2008. At that time, I was 33 years old and, for my entire life, I never imagined that I would see the age of 30. I really, really believed that I was critically flawed and not equipped to navigate the world.

I wasn’t concerned with savings. I didn’t have any form of longterm career goals. At the point, in 2008, when I became clean and sober, I had burned every bridge in my professional world. To the best of my ability, I had closed every professionally [door], and I hadn’t really saved an impressive amount of money.

And, 2008 came with the financial crisis and took what I was able to save and decimated it. It was really scary, because everything I knew about recovery was based on smashing the ego, developing humility, and practicing spiritual principles in all of my affairs.

I couldn’t figure out how pursuing a career as Steve-O ‘the Jackass’ could possibly jive with that.  It just felt like, my savings were decimated, my earnings potential had fallen off of a cliff, if not completely evaporated, and at that same time, I was not feeling myself anymore.

I was done with drugs and alcohol and cigarettes. I was like, mindful about eating healthy and taking care of myself. I was terrified to be confronted by the reality that I was now looking at, possibly many decades to live in front of me, which I had no idea how I would’ve even eat, so it was all a pretty terrifying situation. Looking back on it, it’s scarier than it felt at the time, because at the time, life was really pretty simple.

I got into standup comedy and started touring in 2010, I mean, I’m gonna be perfectly honest. Like, I absolutely wanted to tour as much as I possibly could and earn every fucking penny that I could, because I was so terrified of all these decades that I might have in front of me to live.

Tell me about the new show, ‘The Bucket List.’

I had two things that were really big priorities for me. No. 1, was that standup comedy up to that point had been an exercise in regaling my past. I felt like I was turning into a douchebag who wouldn’t shut up about what he could bench press when he was in high school. You know, like this glory days kind of a thing and living in the past. As crazy as my past was, and as entertaining as much material as there was for me to mine from, it felt pretty depressing. I didn’t wanna live in the past anymore.

I knew I was shooting for the moon to really raise the bar for the crazy kind of antics I’m known for. And it just worked out as I thought about it, that I had a handful of ideas, which had been sitting around forever, and they were just never really intended to happen because they were so ridiculous. Like the one where my idea for being butt naked in an airplane with another man strapped to my back and furiously masturbating, so that when I ejaculate, I’m simultaneously ejaculating, as I fall out of an airplane with another man strapped to my back and I’m butt naked. That idea was darn near, if not fully 20 years old before I did it. I called it Skyjack. It was a crazy, funny thing to say out loud.

Nothing can be illegal and, half the shit I did for ‘The Bucket List’ show was flagrantly illegal. And, I totally did it without any insurance. Oh God.

That that’s, what’s so fucking fun about it is that I just operated with no rules at all. The whole show, it represents all of my worlds just colliding.

Of all your antics and accomplishments, what are you most proud of?

I wanted to maximize my earnings potential while I had it. The happy benefit of that is that sure, I was, I was grinding the comedy club circuit to try to earn as much money as I could, but when I say ‘grinding the comedy club circuit,’ I was putting in the work and I was really developing this craft. So, my priority was to make money, but the reality was that I really developed a legitimate craft, which has grown.

I’m proud of my hustle. I‘ve always had hustle, and I’m proud of that. I’m proud that I’ve set myself apart, and that I’ve created my own momentum with a career for myself, because like I said, ‘Jackass’ has really taught me the importance of fending for yourself.

Steve-O will perform at the Kentucky Center’s Bomhard Theater on Sunday, April 24. The show is at 6:30 p.m., and ticket prices vary.