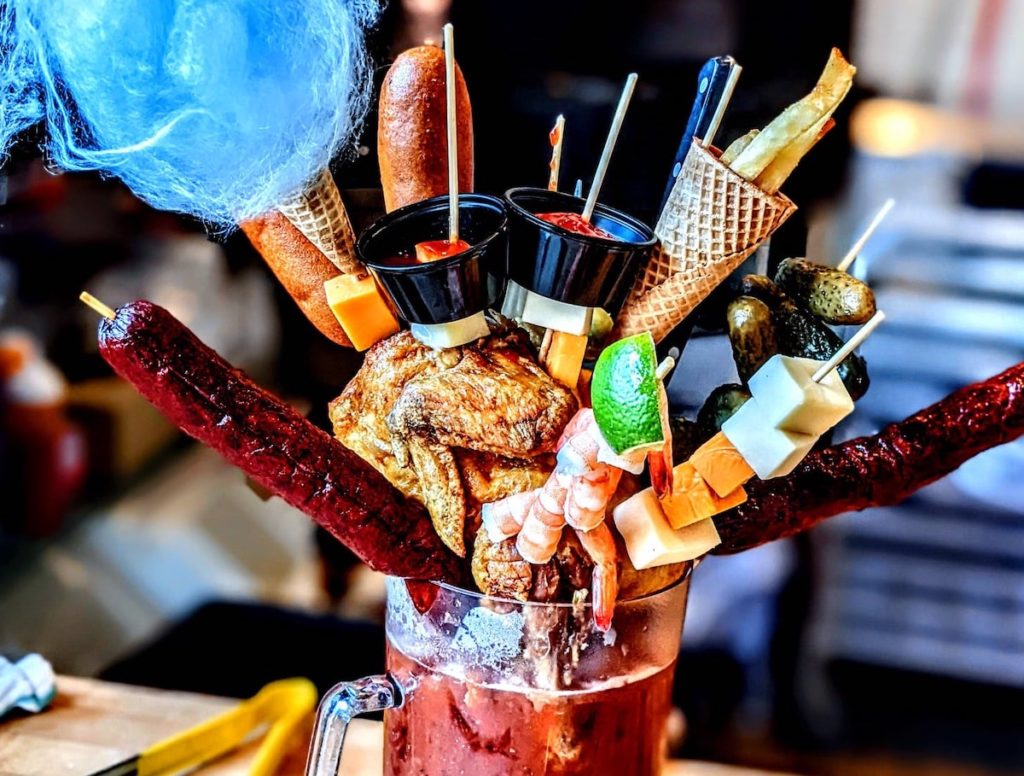 CC’s Kitchen goes big: with its weekly drag shows and with its drinks.

The downtown restaurant has gained fame recently for its Beast drinks, a mimosa and a bloody mary piled high with goodies.

Owner Cory Milliman introduced the drink in January, inspired by a restaurant in San Francisco.

He has yet to witness anyone finish one.

At the end of last month, he debuted the mimosa after hearing from some customers who liked the concept but weren’t big fans of vodka and tomato juice.

Milliman went the dessert route with the mimosa, drawing inspiration from the state fair and childhood nostalgia — filling it with fried Oreos, raspberry Zingers, Little Debbie Jelly Creme Pies, Fruity Pebbles Rice Krispie Treats and Double Chocolate Rice Krispy Treats cut into the shape of lips, Snoballs, giant gumdrops, pineapple spears and some chocolate covered bacon — to cut through all the sweetness, if that’s even possible.

When he brings the drinks out, “It’s like the whole dining room stops,” he said.

CC’s goes similarly big with its burgoo, a traditional Kentucky stew. Instead of keeping to the basics, Milliman adds a footlong andouille sausage to the mix, as well as deep fried corn on the cob, a cheddar and buffalo waffle, shrimp and fried chicken.

And, Milliman has plans to do more: A Beast margarita is in the works, as well as something big, well even bigger than usual, for Derby.

Milliman said he thinks that his lavish creations match the vibe of the restaurant — and his drag persona CC.

His efforts have earned him a spot on Mashed’s list of the 13 Absolute Best Bloody Marys in the US.

The Beast drinks cost $50 and take about 15 minutes to make. Customers can now pre-order them on CC’s website. Milliman estimates that he serves eight to 10 each brunch. CC’s Kitchen is located at 800 S. Fourth St.